Germany claims and loses to Japan: neither arm that wears the LGTBI bracelet nor arm that holds the victory

Human rights and soccer are not on the same track, and the controversial World Cup in Qatar is the best proof. After the German footballers covered their mouths, in... 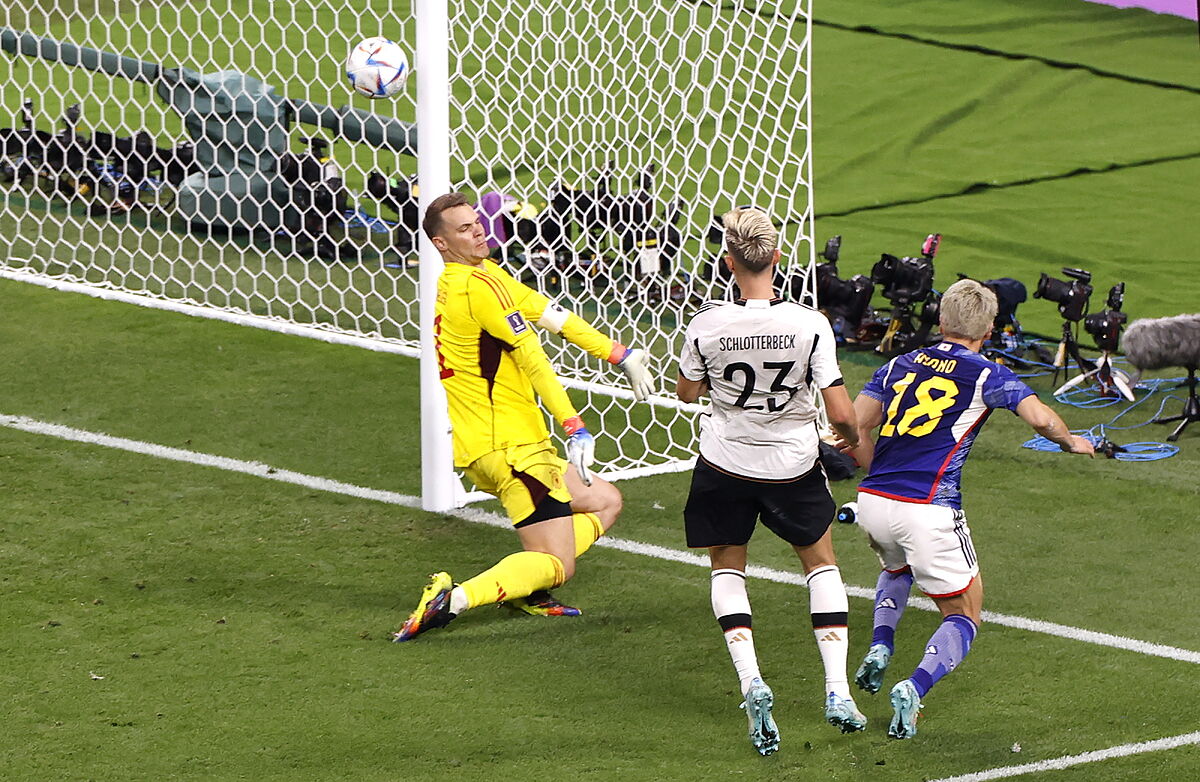 Human rights and soccer are not on the same track, and the controversial World Cup in Qatar is the best proof.

After covering their mouths, the German soccer players, in protest at not being able to wear the LGTBI armband, decomposed on the pitch of the Khalifa stadium, collapsing in front of the floodwaters in Japan, which had been absolutely dominated.

that was supposed to be wearing the bracelet was not in place when Asano advanced like a man possessed and blew up the goal and the group of Spain, which starts backwards.

Neuer had stopped two capital balls shortly before, with an iron fist, although in the second the rebound fell to

, who only had to push into the net.

It was the tie, something unexpected in a game in which Germany had claimed and had commanded.

The only thing that had been missing was the sentence, despite

bringing together the best attackers in his eleven, with

on the pitch, the man who made Germany world champions in Brazil.

This time is different.

The domain they had exercised was total over an unknown Japan, without the electricity that characterizes them, with

Germany's problem was letting them hit the 'on'.

He had had enough chances, with Gnabry, Havertz or Musiala always in attack reference, in the same way as through shots from

, but they always found

, the best of their own.

The goalkeeper allowed the game to be long, too long for a Germany that had already collapsed emotionally with the draw.

Suddenly, nobody wanted the ball.

AGAINST SPAIN IN THE SECOND MATCH

That speaks of the immaturity of this Germany, on the one hand, and of the level of the middle-class teams.

The result is comparable to Saudi Arabia's victory over Argentina.

Two candidates who start with defeat in a situation of maximum commitment.

in the second game, while the three points added by Japan include it among the teams with unexpected options to be in the round of 16.

Until the tie, with a quarter of an hour to go, Japan had not appeared, dominated by a Germany that went ahead with a penalty.

, who received a masterful pass from Kimmich in the area.

The midfielder was solid until the result compromised him.

At that moment, he lacked leadership, like other Flick players.

was in charge of transforming the penalty.

The midfielder had had a lot of presence in the game, but Flick decided to withdraw him prematurely.

German dominance suffered, although the fall is not justified by his absence, but by a blockade in the face of adversity.

Nor can this result be related to an alleged loss of concentration due to the case of the bracelet, since the start of Germany was good.

As we said, they go in different lanes.

The German federation itself supported its footballers on social networks, as well as the desire for Neuer to wear the bracelet, and said that "human rights are not negotiable."

They should never be.

He lost on the field of play, but he gained something before stepping on it.