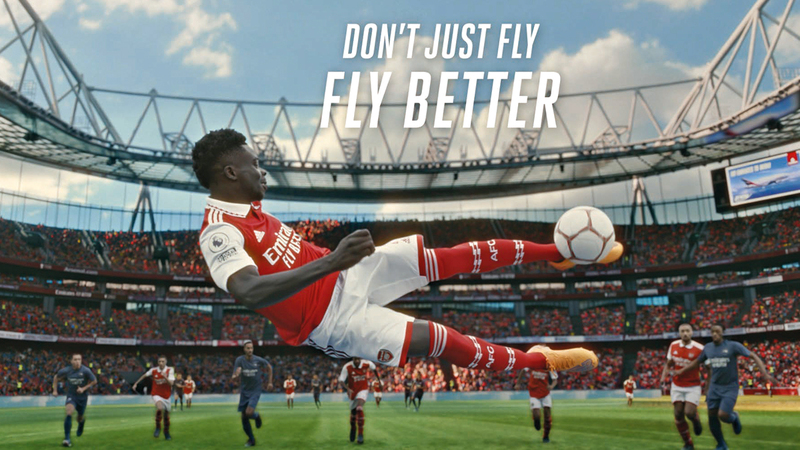 "Emirates Airlines" seeks to attract the attention of football fans around the world with three, in its latest advertising campaign "Sports Lovers".

In the new Emirates Airlines ads, Arsenal stars goalkeeper Aaron Ramsdell, defender Ben White, and winger Bukayo Saka, who participate in the England squad for the Qatar 2022 World Cup, appear as they fly in the air either to intercept and save a ball or score a goal, and the advertisement ends with a message Meaning: “Do not just travel, but travel with permanent distinction.”

These shots highlight Emirates Airlines' strong support for football, and were filmed at the Emirates Stadium, the stadium of Arsenal Football Club in the United Kingdom.

And the latest Emirates Airline ads, “Global Football Fans,” will continue to be displayed on various media platforms until mid-December, and audiences in Africa, the Middle East, the United Kingdom, Germany, France, and Mexico will see ads between football matches, and globally on “CNN” and “CNN” screens. BBC and Sky News.

Fans in these markets, as well as Senegal and North Africa, also watch the campaign on online video platforms and on other digital media, such as social media channels, digital and online news sites and football podcasts.

Emirates Airlines is one of the most prominent brands in the world of football, and its message of “permanent excellence” appears in major European tournaments through its partnership with the most famous European clubs, such as Real Madrid, Arsenal, AC Milan, Olympique Lyon and Benfica. Emirates Airlines and Arsenal are one of the longest partnerships in the English Premier League, as the club's stadium has been called "Emirates Stadium" since 2004, and players have appeared in all matches with their shirts sponsored by Emirates Airlines since 2006.

To view an electronic supplement .. the World Cup teams