The fight between Nemkov and Anderson, Nurmagomedov's campaign for the title and the sixth defense of Adesanya: the most anticipated events of November in MMA

Vadim Nemkov will fight Corey Anderson in the light heavyweight final of the Bellator Grand Prix, and Usman Nurmagomedov will fight Patricky Freire for the lightweight belt. Israel Adesanya will defend the UFC title against Alex Pereira, while Omari Akhmedov will face Rob Wilkinson for the PFL title and $1 million in prize money. 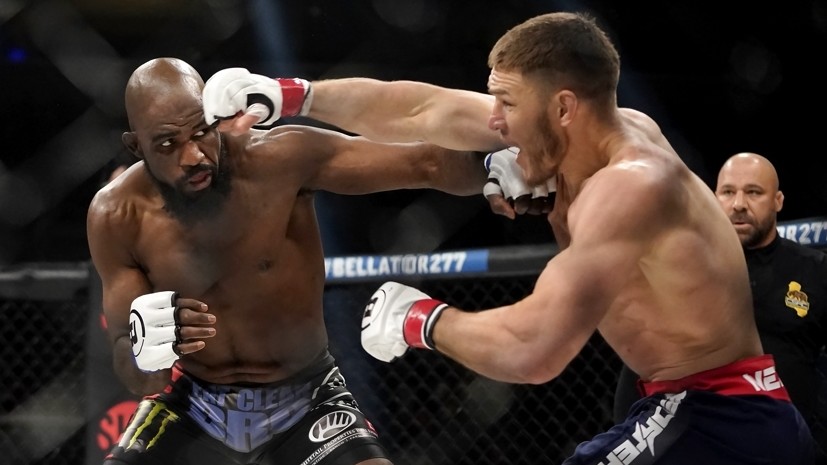 The first major tournament in November will be held in Moscow.

In the main fight of the evening, the fans will have a classic confrontation between a wrestler and a striker, and according to its results, the first finalist of the ACA Lightweight Grand Prix will be determined.

Both are athletes of the highest class, go on long unbeaten streaks and can already successfully prove themselves in the largest foreign leagues.

The only question is whether Eduard Vartanyan will be able to defend against the takedowns of Yusuf Raisov throughout all five rounds.

In percussion technique, he has a more extensive arsenal and, most likely, will have an advantage in this aspect.

No less expected is the fight between the featherweight stars.

Largely because of the brawl they staged live on Match TV.

This episode fueled interest in the battle as much as possible and made it extremely attractive.

Opponents gravitate to the stand and will probably try to get another knockout.

In addition, success may well guarantee them, if not the opportunity to compete for the title, then at least getting into the top 3 rankings.

They are currently ranked fourth and seventh respectively.

A day later, another show of the Ultimate Fighting Championship will take place in Las Vegas.

In general, the card looks rather unremarkable, but the interest of Russian fans of mixed martial arts will certainly attract a duel with the participation of a domestic athlete.

So, the representative of the Eagles MMA will try to rehabilitate himself for the defeat from Tim Elliott and return to the top 15 again.

And for this, Tagir Ulanbekov will need to get the better of Nate Maness, the former rival of his teammate Umar Nurmagomedov.

After a sensitive defeat, the American decided to take a sharp turn in his career and try his hand at flyweight.

And while his prospects look vague.

It is possible that the 178-centimeter fighter will have to pass the main test even before the tournament itself.

After all, meeting the category limit of up to 56.7 kilograms will be extremely difficult.

A week later, the UFC will traditionally hold a major tournament in New York, and one of the most anticipated fights of the year will crown it.

Israel Adesanya ascended the middleweight throne three years ago and has since made five successful belt defenses.

However, in November he will have to face Alex Pereira, who defeated him twice in kickboxing fights.

In 2016, the Brazilian took the upper hand by unanimous decision, and a year later he inflicted the first and so far the only defeat in his career on the Nigerian.

About a year ago, Pereira, in the status of an ex-holder of the Glory kickboxing promotion belt, made his debut in the championship, and even then it became clear that their third meeting with Adesanya was not far off.

In nine months, he won three victories, and in the last battle he knocked out Sean Strickland, the fourth number of the division at that time, which allowed him to receive the title of the first contender.

By the way, on the same show, Israel got the better of Jared Kannonir, but received a huge portion of criticism for a faded performance.

But in the Big Apple, this is definitely not to be expected.

Two drummers will surely demonstrate a bright duel, as a result of which the king in the middle category may well change.

Also in New York will be a fight for the title in the women's minimum weight.

And although Carla Esparza owns the trophy, it is hardly possible to call her the favorite in the battle with Weili Zhang.

In May, the American created a sensation and regained the belt 2612 days after winning it, but her victory over Rose Namajunas was largely an accident.

The girls showed absolutely nothing in the cage, as a result of which the judges had to make a difficult decision.

The Chinese woman is unlikely to be so passive.

Now she is rightly considered one of the most uncompromising female fighters, as evidenced by 18 early victories in 23 battles.

Much more intriguing is the confrontation between Dustin Poirier and Michael Chandler.

The two lightweight stars are eager to get back in the race for the title and face off against newly minted champion Islam Makhachev.

True, Charles Oliveira, who is eager for revenge, can interfere with their plans.

If the Russian is still organizing a duel with Alexander Volkanovski, then the Brazilian may well be put up against the strongest of the two Americans.

And he dealt with both quite recently, and quite easily.

In November, Muslim Magomedov will hold his third defense of the belt.

The Dagestani will try to extend his unbeaten streak to 12 bouts, and Oleg Olenichev will try to stop him.

The 30-year-old fighter could not find his weight category for a long time, but after moving to light heavyweight he became a formidable force.

He did not lose any of the last six fights and in the shortest possible time received the status of the first contender.

The only embarrassing thing is that on the way to this title, Olenichev defeated only one representative of the top 10 - Amirkhan Guliyev, who also does not have the opportunity to boast of victories over the tops.

In addition, Oleg can hardly be called a puncher or a specialist in pain and suffocation.

The last time he won ahead of schedule in September 2020, after which he twice brought the case to a decision of the judges.

And at a distance it will be extremely difficult for him to compete with Magomedov.

One of the most anticipated tournaments of the month will be held in Chicago.

It will be crowned by the long-awaited rematch between Vadim Nemkov and Corey Anderson, which will determine not only the victor of the Light Heavyweight Grand Prix, but also the title holder in this category.

And although the Russian owns the belt and has nine victories in the last ten battles, he cannot be unequivocally called the favorite.

By the first meeting with the American, he was clearly not ready and did not look good in the first two rounds, but the negligence of his opponent gave him a chance to fix everything.

Then the opponents clashed heads at the beginning of the third segment, as a result of which the duel was declared invalid.

In many ways, this fight promises to be decisive in Nemkov's career.

Over the past years, he has been matchmaking in the UFC, and in order to prove his readiness to perform in the largest promotion on the planet, he is obliged to take precedence over her former representative, who did not gain fame there.

Yes, Anderson spent about six years in the championship and was in the top division, but he never received the status of the first contender.

And a defeat from such an opponent can spoil Vadim's resume.

Usman Nurmagomedov will have to pass an equally difficult test, who will try to become the sixth Bellator title holder from Russia.

And although few doubt the presence of colossal talent in the cousin Khabib, it is difficult to say for sure whether he is ready for such a challenge.

So far, although he has won four league victories, he has never met with truly strong opponents.

Moreover, none of them even entered the top 10.

Against their background, Patriki Freire seems to be a fighter of a completely different level.

And whether the domestic lightweight is ready to fight with him is a mystery.

Now Usman is in a very difficult situation.

At one time, even Conor McGregor had to do much more to become the first contender.

And this despite the fact that even then he collected large arenas and attracted great attention from fans and sponsors.

But if in the case of the Irishman, it was said about the patronage from the leadership of the promotion, then the record-breaking ascent to the top of Nurmagomedov is explained by the star status of Khabib.

And if his success allows him to justify the advances given, then a defeat can cast a shadow on both the organization and the Eagle.

Among other things, three more Russians will perform at the show in Chicago, and for two of them this battle will be their debut.

Ex-Eagle FC fighter Imamshafi Aliyev will compete with the little-known Sean Connor Fallon and try to remain undefeated (8-0), and ex-WWFC Ukrainian League champion Khasan Askhabov will fight with Otto Rodriguez, who managed to light up in the LFA.

In turn, Akhmed Magomedov will try to win the second fight in a row under the auspices of the American organization.

He will be opposed by 37-year-old Daniel Weichel, who at one time not only took the M-1 Global title, but also excelled in the Bellator Grand Prix.

A day later, the King of Kung Fu will enter the octagon, who is faced with the task of closing a crushing defeat from Lee Jingliang.

And although it is impossible to call the Portuguese a weak opponent, he is quite convenient for Muslim Salikhov.

Andre Fialho constantly goes forward and likes to trade in the standing position, but at the same time he misses a lot and attacks quite monotonously.

In June, Jake Matthews took full advantage of this.

Not the most skillful in striking technique, the Australian literally drove over the opponent and knocked him out already in the middle of the second round.

And the Russian is quite capable of repeating his success.

At the end of the month, another tournament will take place in New York, and based on its results, the winners of the Professional Fighters League 2022 season will be determined.

Only Omari Akhmedov managed to get to the decisive round, who will compete for the title in the division up to 93 kg and along the way try to become richer by $ 1 million. And on paper, Rob Wilkinson can hardly be called a fighter of his level.

The Australian has never grabbed the stars from the sky, and reached the final largely thanks to a lucky draw.

On the side of the Russian will be not only experience, but also wrestling skills that can bring him success.

Also on the show will perform the former Grand Prix triumphant Magomed Magomedkerimov, who failed to break into the playoffs only on additional indicators.

And although he missed the chance to hit the jackpot and regain his lost title, he is quite capable of improving the record and earning good money.

To do this, you need to deal with 39-year-old Gleison Tibau.

The Brazilian, although still a dangerous opponent, is no longer as good as ten years ago.

If then he fought on equal terms with Khabib Nurmagomedov, then in May he lost to the little-known Jordanian Jarra Hussein Al-Silavi.