“Our loved ones almost died”: what is known about clashes between fans and police at a football match in Argentina

One person died and more than a hundred were injured in clashes between police and fans during an Argentine championship football match between Gimnasia and Boca Juniors. According to preliminary data, about 10 thousand fans could not get into the stands and tried to break through there. Law enforcement forces used rubber bullets and tear gas, which penetrated the stadium bowl. As a result, the match was cancelled. The incident is being investigated. 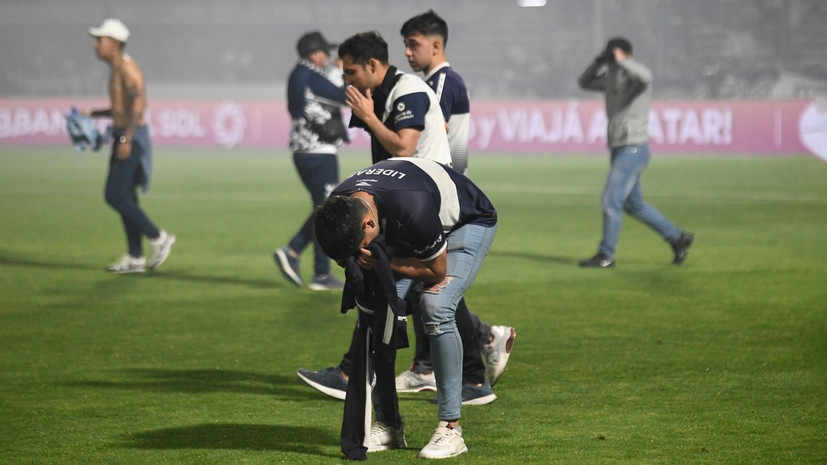 Just a few days after the tragedy at a football match in Indonesia, where more than 120 people died during a stampede, a similar incident occurred in Argentina, and only miraculously there were no multiple casualties.

Before the start of the national championship match between the Gimnasia and Boca Juniors teams, riots broke out among the fans, in connection with which the police again, as in Indonesia, used tear gas.

According to one version, the reason for what happened was the sale of a much larger number of tickets than the stadium named after Juan Carmelo Serillo in La Plata can accommodate.

When all the seats in the arena were full, the stewards blocked the entrance gate, and the fans remaining outside tried to break into the match by force, which led to a clash with law enforcement agencies.

According to media reports, about 10 thousand football fans could not get into the stadium.

At the same time, it is emphasized that only Gimnasia fans were present at the game, since in the province of Buenos Aires, since 2013, guests' fans have been forbidden to come to stadiums due to frequent clashes and fights between different groups.

Despite the fact that the events unfolded outside the stadium, tear gas quickly penetrated inside, which caused panic in the stands.

People covered their faces with their hands and clothes, trying to get out.

The match was stopped by the chief referee Hernan Mastrangelo nine minutes after the start, and the players were hastily taken to the dressing rooms.

They did not resume the game, as the situation remained tense for a long time.

It will be rescheduled for another day.

“Everyone who was on the field suffered from this.

It became impossible to breathe.

The situation was out of control and there were no guarantees of safety,” the referee said.

At least one person was killed in the incident.

The 57-year-old man died on the way to the hospital.

In addition, more than a hundred people were injured.

The operator of one of the local TV channels received several shots with rubber bullets from the police while filming the riots.

The Argentine Football Association, the Professional Football League and both teams expressed their condolences to the relatives of the deceased, and also called for a serious reflection on the sad events.

“AFA strongly condemns what happened today at the Gimnasia stadium and expresses its determination to continue working to eradicate such incidents that cast a shadow on the football festival,” the federation said in a statement.

In turn, "Khimnasia" demanded a thorough investigation and find those responsible for the tragedy.

The club said they were ready to provide all the necessary documents and materials.

“All the protocols established by the law enforcement agencies were observed by us.

There was no oversale of tickets, the behavior of our partners and fans was correct, ”the official message on Twitter says.

For all participants in the match, the incident was a great shock and brought a lot of emotions.

Most of the Gimnasia players had families at the stadium, including children.

“My two-year-old son was choking.

We are terribly worried and worried about everyone who was in the stands.

We had an ordinary football match, and then it turned into this, and the realization came that our relatives almost died, ”said defender Leonardo Morales.

His teammate Franco Soldato, who previously played for Boco Juniors, admitted that during the riots he could not find his family for a long time, and it was the longest 45 minutes in his life.

“I saw the despair of people who were having a hard time... And I felt great relief when I finally found my relatives.

My dad is a doctor, he started helping people in the stands because there were no ambulances... He was there until I asked him to come inside to attend to my wife and sister, who was with a four-month-old baby. - said the striker.

According to the football player, such events cast a shadow on the sport as a whole.

“The dream of every boy who plays ball is a match like today.

But it is worth living through such a night, and all these illusions collapse.

You understand that something else is really important, ”Soldato noted.

The regional security ministry has already said that a thorough investigation into the incident will be carried out, including in relation to the possible sale of tickets in excess of the stadium's capacity.