Negotiations with international federations and the fate of Fan ID: what was discussed at the meeting of the executive committee of the RFU

A regular meeting of the executive committee of the Russian Football Union took place in Moscow, at which several important personnel decisions were made. Maxim Mitrofanov was approved as the General Secretary of the RFU, and Sergey Ovchinnikov and Leonid Slutsky were included in the committee of national teams. At the end of the event, the head of the organization Alexander Dyukov told how work is being done to remove the restrictions imposed by UEFA and FIFA, spoke about the integration of Crimea into domestic competitions and explained whether partial mobilization would affect the players. 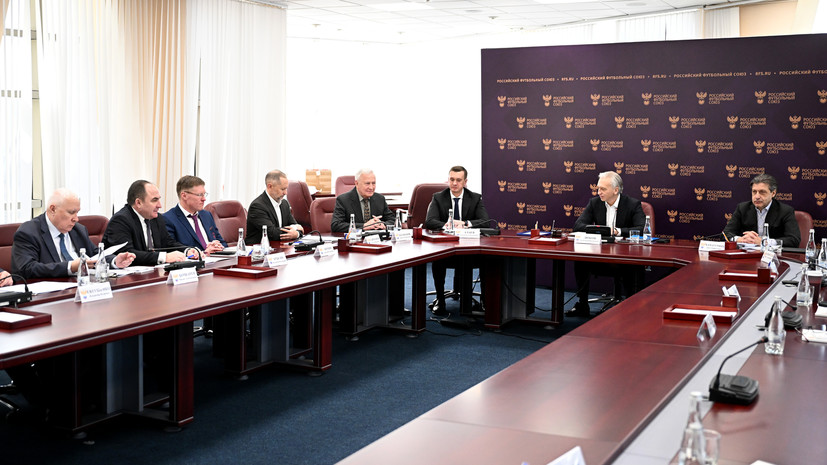 The executive committee of the Russian Football Union, held on Wednesday, October 5, was expected to make several important decisions.

First of all, it concerned personnel issues.

Thus, a new general secretary of the organization was to be appointed.

They predictably became Maxim Mitrofanov, who held this post as acting.

And the president of the RPL Alexander Alaev entered the bureau of the executive committee.

Changes were also made to the composition of six committees.

The greatest changes have taken place in the ethics committee, which has been completely revamped.

And the committee of combined teams was replenished by such well-known specialists as Sergey Ovchinnikov and Leonid Slutsky.

RFU President Alexander Dyukov called cooperation with them a great success and assured that the body would have to carry out a serious amount of work.

“The vertical of national teams is 25 teams.

Of course, we did not just create this institution.

The committee faces a very important task of developing an appropriate methodology and regulations.

This is the development of a systematic approach to calling the players, accompanying them, determining sparring partners, preparing for matches, and so on, ”the functionary explained.

For the first tournament, the decision was made unanimously.

The confrontation will take place on June 11, 2023 at Luzhniki.

On the second, the final verdict is going to be made in April.

At the same time, Dyukov promised that the principle of neutrality would most likely be taken into account so that there would be no reasons for dissatisfaction with individual teams, as happened in the situation with Spartak.

“The idea of ​​organizing a match for the Super Cup in St. Petersburg was discussed for a long time, but I think you will agree that it justified itself.

Another important topic was the issue of partial mobilization and the possible suspension of the competition in connection with it.

The President of the RFU assured that this will not happen.

As for the conscription of football players for military service, he advised to wait for the relevant order of the Ministry of Sports.

Let's wait for the results of the work.

Then we will understand which of the participants can be granted a deferral by decision of the Ministry of Sports.

Football in this regard is on an equal footing with other sports, ”Dyukov emphasized.

He was immediately asked whether the information that a number of RFU employees allegedly left the country so as not to join the army was true.

According to the functionary, some of his subordinates really went on vacation and left Russia, but must return.

At the same time, he did not hide: several people received summons and were mobilized.

According to the government decree, jobs have been saved for them.

In parallel, the Union continues to engage in dialogue with UEFA and FIFA regarding the return of domestic clubs and national teams to international tournaments.

In this part, Dyukov allowed himself cautious optimism after the verdict of the International Boxing Association (IBA) to allow the Russians to participate in competitions under the flag of the country.

In his opinion, this is a good sign and gives hope, including to the players.

We save the dialogue.

We are working to protect the interests of fans and athletes.

A statement of claim and an appeal were filed with CAS.

Unfortunately, they supported FIFA and UEFA.

We do not agree, but in order to continue to defend the interests further, the full text of the court order is required.

After... maybe we'll go to the Swiss Supreme Court.

We understand that a politicized verdict was issued regarding Russia, ”said the President of the RFU.

In the meantime, Dyukov believes, it is necessary not only to negotiate, but also to regularly take part in international matches.

The Russian national team should hold the next meeting on November 19 with Bosnia and Herzegovina in St. Petersburg.

However, her organization was called into question due to the reluctance of a number of rival stars to take part in it.

The head of the RFU promised that the football federation of the Balkan state would give a final answer on October 10.

“We would like to play with the strongest, but even if one of the leaders does not come, a meeting is necessary.

The return process will be gradual, and such games should be played.

Therefore, we are waiting for the 10th, but at the moment we proceed from the fact that the match will take place and we are preparing for it, ”said the functionary.

But nothing should prevent the confrontation with the Iranian team in November from taking place.

According to the head of the RFU, the meeting is likely to be held either in Tehran or Qatar.

The final decision will be made a little later.

Moreover, he did not rule out games with Kazakhstan in the near future.

Another equally important problem facing the union is the issue of Crimea.

The peninsula needs to be integrated into the domestic football system, but, for example, the inclusion of local teams in professional leagues threatens with sanctions.

At the same time, Dyukov stressed that amateur and children's teams representing the region would soon compete in all-Russian competitions.

“At the moment, we are guided by the letters that we received from FIFA and UEFA in 2014.

They made a decision under which Crimea was recognized as a special football zone.

From this we proceed.

An important issue is the development of the game there.

Certain work is being carried out in all areas, ”explained Dyukov.

As for professional football, a real breakthrough could be the creation of a working group in the FNL to license some Crimean clubs.

The functionary called it quite likely that they will be included in the second division of the country, starting next season, and did not rule out the introduction of new restrictions in connection with this.

“Since I took office, we have chosen the path of dialogue.

At the beginning of the year, we were already at the end of the road.

Children's teams from Crimea should have been allowed to take part in all-Russian competitions.

Unfortunately, it was not issued in the form of directive letters.

FIFA and UEFA understand that football in Crimea must develop and action must be taken,” the President stressed.

He promised to carefully study the situation in the territories that have recently become part of Russia.

From relations with FIFA and UEFA, Dyukov moved on to domestic tournaments and highly appreciated the level of football in the current RPL season.

He considered the increased level of intensity of the game, the desire of teams to show open football and confidence in young Russians to be the most important criterion.

“There are a lot of interesting matches going on.

Someone thinks that the level has fallen, someone does not.

It's hard to judge.

To understand this, you need international official matches.

On the one hand, strong legionnaires left, on the other hand, other high-quality foreigners arrived.

I do not like that the gap between the first and second eights is growing more and more.

This is objective, but therefore we correctly decided not to increase the number of teams in the RPL for the time being, ”the functionary said.

At the same time, he did not crown Zenit in advance and noted that the Petersburgers are quite capable of losing their advantage in the remaining 19 rounds.

He called the competent work on the transfer market in recent years, the fruits of which the club is still reaping, the main secret of their success, he called.

Finally, as an additional plus of the current season, he noted the increased level of income.

“From a commercial point of view, the league will receive record revenues - more than 10 billion rubles.

If we add to them the growth of the Russian Cup prize fund, we can talk about quite serious money for the RPL clubs, ”Dyukov rejoiced.

At the same time, Fan-ID remains a serious problem for Premier League teams, the introduction of which was criticized by many fans.

Even the head coach of the Russian national team and Rostov, Valery Karpin, drew attention to the drop in attendance associated with the implementation of the law.

However, Dyukov immediately stressed that it is not worth waiting for the government to amend the law.

“We understand what it was guided by.

The reason was the adoption of additional measures to ensure safety during matches.

I know your attitude to this law.

But the topic of security is a matter for government and law enforcement.

If something happens, they will be held responsible.

Now the situation is favorable, but invisible and very serious work is behind this.

The government believes that the law is needed and should be implemented,” said the head of the RFU.

At the same time, he did not associate the decrease in attendance with the need to issue "fan passports" and noted positive developments in obtaining them.

According to him, football fans practically do not face problems when issuing Fan-IDs, and only two dozen people who were deprived of the right to visit stadiums by court decision received a refusal.

“We are already seeing a positive trend.

The increase is 15 thousand cards per week.

At first there were technical problems, because the system is complex, but now it works almost flawlessly.

There were fears that extradition refusals would follow, but this is also not the case.

The possibility of people receiving cards remotely without visiting the MFC is being discussed.

The deployment of mobile points of the MFC near the arenas can also simplify the process, ”added Dyukov.

Continuing the topic of breaking the law, the head of the federation was asked about the sensational case of Nikolai Larin.

The former director of the Chertanovo football academy was sentenced to three years in a penal colony in a fraud case.

The functionary admitted that he was sorry for the manager, but from a formal point of view, he committed a crime in which he himself confessed.

We know how much has been done to prepare the players, but this does not mean that the norms of the law must be violated.

Larin should have been punished.

As for the timing, I am not an expert in the field of criminal law.

If we talk about the human reaction, the verdict turned out to be tough, ”summed up the president of the RFU.

Finally, just before the end of the press conference, information appeared that Ukraine was included in the application of Spain and Portugal to host the 2030 World Cup.

According to Dyukov, such a move at least looks strange and controversial.

“It is their right.

The application needs to be studied, but if we give an express analysis, at the moment I don’t see any commercial, marketing logic and logistical synergy from such an alliance.

The joint application of Spain and Portugal looked quite harmonious, the accession of a third country to them did not make it stronger.

In addition to politics, I see nothing in this, ”said the head of the RFU.