Khaled Al Balushi: I thought about retiring before the “20” .. And the advice of the parents saved me

Al-Ain team player, the international Khaled Al-Balushi, revealed that he was only one step away from retiring from football before he completed his 20th year, in order to fully devote himself to university studies, but the unlimited support, support, advice and advice he found from his parents was behind his ability to reconcile between 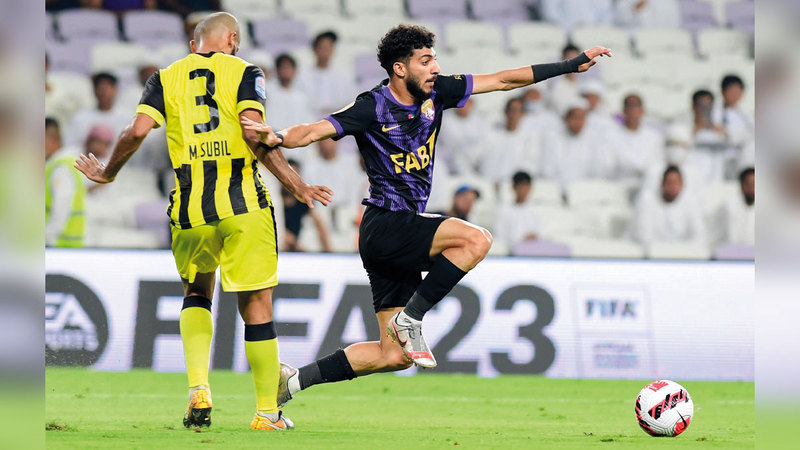 He appeared with the national team for the first time... and is preparing for his 100th match with Al Ain

Khaled Al Balushi: I thought about retiring before the “20” .. And the advice of the parents saved me

Khaled Al Balushi is looking forward to a distinguished participation in Al Ain's next meeting in front of Dibba.

Al-Ain team player, international Khaled Al-Balushi, revealed that he was only one step away from retiring from football before he completed his 20th year, in order to fully devote himself to university studies, but the unlimited support, support, advice and advice he found from his parents was behind his ability to reconcile his education and continue His professional career with "The Leader".

Al-Balushi told "Emirates Today": "I thought carefully about stopping playing football, it is certainly not an easy thing to reach this decision, but my desire to study at university was the main reason behind my thinking about retiring, even before I completed 20 years, I spoke to my parents From them, I found support, backing, advice and the right advice that enabled me to make the decision to continue playing, and saved my professional career.”

Al Balushi appeared for the first time in the national team shirt last month, and was one of the names that contributed to the crowning of Al Ain last season with the ADNOC Professional League and League Cup double.

The Al-Ain team’s confrontation, tomorrow evening, against Dibba, in the fifth round of the ADNOC Professional League, may be like the rest of the matches that await the Al-Ain team seeking to retain the league title, but on the other hand, Khaled Al-Balushi may play his 100th match in all professional tournaments in the “violet” shirt, which is what It is an important number in his professional career, which he started as a player in the junior stages and progressed to the first team.

The reconciliation between completing school levels and continuing the sports career is an obstacle for many, while some choose to sacrifice education in the hope of returning to it in the future. However, the ADNOC Pro League stadiums are filled with a large group of current players who have succeeded in staying in both fields at the same time, which was a motivation The player has Al Ain to act on the advice of his parents, which he is currently reaping.

Al Balooshi confirmed that his work on the advice of his parents reflected positively on him, and said: “I learned from this that everything you want to do will be possible. The honor of being summoned.

Of course, I am working on improving on a daily basis, and I am happy with what I have achieved so far at the age of 23.”

The language of statistics confirms that the Al Ain player has been in continuous development since he received the honor of being called up to the first team under the leadership of former coach, the Croatian Zoran Mamić, as he participated in the 2019-2020 season in three games, and his numbers increased in the 2020-2021 season by 16 games, and participated in the season 2021-2022 in 13 matches, while he appeared in all of the “leader” matches this season.

And about his participation during the current season as an alternative, unlike previous seasons, which was essential in most of them, the international Khaled Al-Balushi confirmed that the decision belongs to the coach of the Ukrainian team Rebrov, and that he is satisfied with himself, and will be ready at any time the coach needs him to participate, pointing out that he is working to benefit from all An opportunity to prove himself, as happened when he got the first opportunity with coach Zoran four years ago.

He pointed out that he continued to benefit from the experiences of a number of foreign stars who played alongside them in the team, previously and currently, and said: "Currently, the team has a group of players with experience with their national teams, such as the Ukrainian international Yarmolenko, the Togolese international Laba Kudjo, and the Moroccan international Sofiane Rahimi, and they are players that I benefit from, in addition to the citizen players as well, which is undoubtedly a good thing.”

It is noteworthy that Al Ain Football Club renewed, last July, the player’s contract for four seasons until 2026, and the decision to renew came against the background of the levels that the player continued to provide with “Violet” in all competitions, which made him coveted by a number of clubs, but the decision to renew a contract Long-term, the team keeps its rookie player, turning Al Balooshi from a player who was on the verge of retiring before the age of 20, to one of the important elements in the team now.

He participated for the first time with Al Ain's first team in the 2019-2020 season, under the leadership of former Croatian coach Zoran.

He contributed to the crowning of the Al-Ain team with the League and League Cup double, last season, and renewed his contract until 2026.