At the wheel of the Renault Austral, the best car of the brand and the most Spanish

Renault launched the Kadjar in 2015, an SUV in the compact segment (Nissan Qashqai, Hyundai Tucson or Peugeot 3008) but it did not achieve the expected success. So much so that the brand wanted... 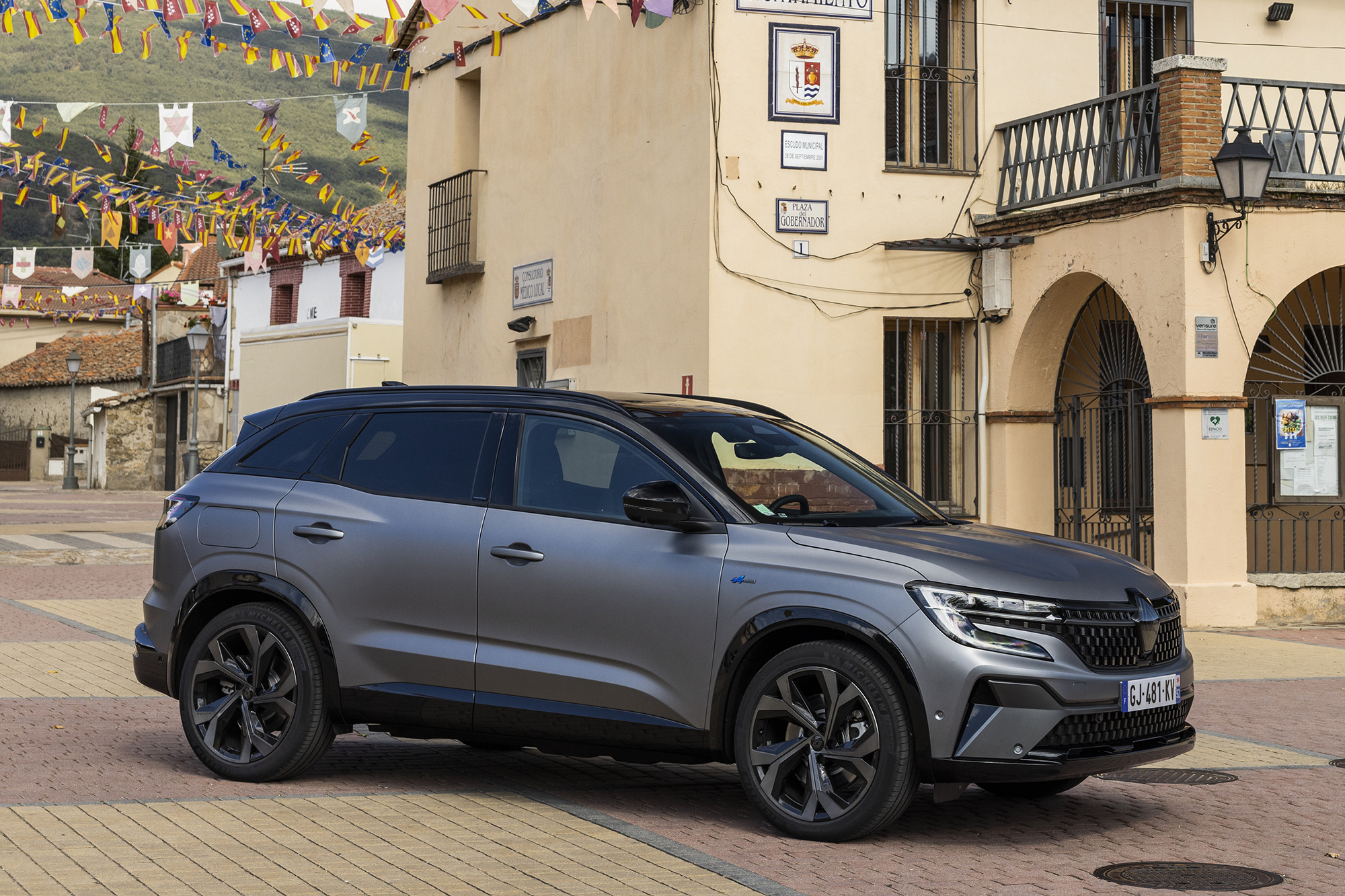 Renault launched the Kadjar in 2015, an SUV in the compact segment (Nissan Qashqai, Hyundai Tucson or Peugeot 3008) but

it did not achieve the expected success.

So much so that the brand wanted to make a clean slate, so its replacement has even changed its name

It is called Austral, it represents an exponential leap in all aspects and, in addition, it is manufactured in Spain, where almost all of its ingredients come from.

"Except the design, almost everything"

In addition to the image it can provide,

this SUV is another step in what Renault has called the reconquest of the C segment.

The movement began with the successful Arkana, an SUV with a coupé format, and continued with the Mégane E-Tech 100% electric and built on a specific base for a battery-powered model.

There will be one of seven seats

The third step is taken by Austral, the

first Renault to use the Alliance's CMF-CD platform for medium and large cars.

For example, the Arkana uses the previous CMF-B.

Among other advantages, the new structure makes it possible to mount more advanced electrified systems or more security assistants.

And in the future, there will be at least a body for seven seats (filling the gap in the Espace and Koleos) and maybe also a coupé type.

The Austral can now be ordered and

The car's design is graceful, with familiar SUV traits such as body guards;

the raised beltline or the large wheels: there are up to 20 inches.

This is the case of those that carry the esprit Alpine variants, a finish that is released for the first time in a Renault and that can be ordered in an exclusive matt gray color that feels like a movie,

even with the two-tone roof.

It is the car that appears in the photos and is distinguished by other sporty details for the bodywork or the interior.

By size, of the largest

The lights are always LED, normal, adaptive or matrix.

And although the Austral will not have four-wheel drive (the Kadjar did offer it), the ground clearance (18 cm

) will allow it to piste with certain guarantees.

In addition, one of the options is a system that improves traction in snow or mud.

it is placed in the upper part of the SUV segment.

Access to the interior is not a problem, the doors open wide and the movement (because of the height of the seats) is quite natural.

The dashboard, as much as it is already known from the Mégane E-Tech, never ceases to surprise for good.

It has a flattened ruffle above and below.

We liked it and it does not prevent us from seeing the information on the instrument panel, digital and customizable in four configurations.

Another large screen (up to 12 inches) is added to this screen, creating a set that has the shape of an inverted L.

And they are completed with a head up display that shows a large amount of data on the windshield.

The best of all is that the multimedia system 'drinks' from Google, which allows us to access its applications (Google Maps, Google Play, etc.) or directly replicate our mobile phone.

It works really well, apart from the quality of the screen and the speed of the processor.

Another of the aspects in which the Austral stands out, and they boast of it in the Palencia factory, is the high quality of the product.

Inside it is evident, both in the materials used and in the settings in general.

At least, in the top-of-the-range versions, since we can count on real wood, leather, Alcantara, quilted fabric, sheathed materials and lacquered trim.

In the rear seats, the dimensions of amplitude place it in the average of the segment with an added value.

The best thing is that the rear seat has reclining backrests in three positions and can be moved up to 16 centimeters lengthwise.

This allows you to play with the space for the passengers or the trunk, which ranges between 500 and 575 liters, which is reduced to 430 or 555 liters in the full hybrid versions due to the space that the extra battery steals.

There are also plenty of pockets for items scattered around the cabin, totaling up to 35 litres.

Because the Austral range already completely dispenses with the diesel option and will only be marketed with electrified gasoline engines and always with an ECO label, although plug-in hybrid variants that many of its rivals do have are not contemplated for now.

On the one hand, there are two light hybrid variants with additional 12-volt electrical architecture and that is offered with 140 or 160 CV,

the first manual or automatic with continuous variator, the next always with this second change.

Renault has approved average consumption for it of just over six liters per 100 km, although due to emissions it will have to pay Registration Tax.

In these models, the electrical part supports the combustion engine, also reducing its consumption, but it cannot move the car on its own.

It is the same scheme used by some Nissan Qashqai.

This is not the case with the great star of the brand, which resorts to an optimized evolution of the E-Tech system.

It has a three-cylinder 1.2 Turbo gasoline engine, another highly improved electric traction engine and a third that acts as a generator.

To this is added a more capable battery (2 kWh and that works at 400 volts) and a multimodal gearbox with one more gear and that offers up to 15 combinations of use between the different propulsions.

This powertrain is offered with

It always starts on electric and, in the city, it is capable of driving

up to 80% of the time on electric, which reduces the consumption by 40%

In addition, it has a regeneration system in four selectable levels through the paddles on the steering wheel.

It is particularly 'anxious', since not even in the smoothest one does it admit sailing, which is possible with the light hybrid.

As the combustion engine also has a high efficiency (41%), the end result is a first-rate relationship between performance and consumption/emissions: going

102 grams of CO2 per kilometer (does not pay registration tax) and an average consumption of 4.5 litres.

"Considering that the real one is 5.5 liters, with a 55-liter tank we would be talking about a range of 1,000 km" pointed out the Renault engineers in the presentation to justify that, with these figures, diesel does not make sense.

At the wheel of the 200 hp version

For our test, which ran for about

300 kilometers on all kinds of roads,

we chose the top-of-the-range version: pure hybrid with 200 hp and the special Esprit Alpine package, both in the attractive matt gray color and in blue.

And in both cases, with two-tone bodywork and a black roof.

The front seats are specific and perhaps, for someone small like me, without the optimal support.

That said, the ergonomics are very good.

The gear lever is a rod placed on the right, in the style of the old Mercedes-Benz, which frees up a lot of space

in the center console, where a comfortable sliding support has been placed on which to rest the arm to access the multifunction screen and the buttons placed under it.

Although most of the procedures can be carried out through the Google assistant, through voice commands, or through the buttons on the steering wheel.

the program that allows you to select the different driving modes: up to six if we have ordered the Extended Grip improved traction system (it costs just over 300 euros).

Our test cars did not have it,

but the so-called 4CONTROL Advanced did.

It is the third generation of the four-wheel steering system that the brand launched in 2007 and that, in this case, allows the rear wheels to be directed

in the same direction as the front wheels (up to 1 degree) when we are on the road, or to direct the rear wheels up to 5 degrees in opposition to the front, to improve maneuverability in the city.

In fact, it is thus achieved that the turning diameter (even with 20-inch wheels) is only 10.1 meters.

That is, less than a Clio as we could see in a specific test.

The driver can adjust the response of this element up to 13 levels.

It seems excessive to us, but there it is and it is important to use it until we find the right parameter: our test vehicles had a very direct calibration and that made the car turn more than desired when cornering, forcing corrections to be made to the steering wheel .

That moron is retouched to our liking, and matter settled.

It is the only drawback to the general behavior of the car, which allows rapid use without detracting from comfort, although it does not have the sportier touch of some rivals.

The offer of the new Austral is structured around three finishes: Equilibre, Techno and Iconic and

for the 200 hp model with Iconiq finish and the Esprit Alpine package.

This is also available with the intermediate finish and represents an additional cost of 1,000 euros (already included in the case discussed).

However, Renault has launched a campaign with a multi-option credit with a fee of 299 for the 200 Cv E-tech with Techno finish.

Among the equipment, the

multiple driving assistants stand out (up to 32, for the 16 with which the Arkana arrived),

all the connectivity provided by Google and details such as the sunroof or a spectacular Harman Kardom sound system.

In addition, a good number of optional packages are offered that, as is usual in the brand,

have very contained prices: between 260 and less than 800 euros

, except for the four-wheel drive or special paints, which are above 1,000. .