4 refereeing interventions deprive the fans of the joy of football

The past four rounds of the ADNOC Professional Football League, especially the fourth round, witnessed strong criticism of some stadium judges, due to the occurrence of some refereeing errors, which led to the objection of some clubs and their protest against the arbitration, while four cases emerged in which the football staff intervened. 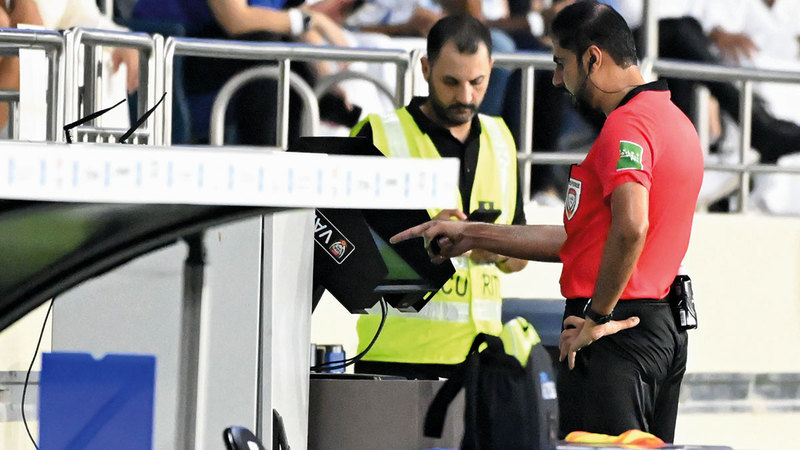 Athletes attributed the matter to the inexperience of some stadium judges

4 refereeing interventions deprive the fans of the joy of football

The past four rounds of the ADNOC Professional Football League, especially the fourth round, witnessed strong criticism of some stadium judges, due to the occurrence of some refereeing errors, which led to some clubs objecting and protesting against arbitration, while four cases emerged in which the refereeing staff interfered in the match. This leads to the prevention of excitement and artistic pleasure, and spoiling the atmosphere of the match, as these cases were represented in the lack of access to the players of the two teams, and the frequent use of the whistle in every small and large during the match, as well as the frequent resort to the video referee technology (mouse), in addition to granting time A lost substitute in some matches for more than six minutes without justification, while athletes confirmed that such interventions by some referees lead to spoiling the fun of matches from a technical point of view, and causing poor technical performance of the teams during the matches, referring this to the involvement of some inexperienced referees. in dealing with matches and exposing them to psychological pressure.

For his part, former Football Association member and sports analyst, Dr. Salim Al Shamsi, confirmed that he had already noticed that some referees resorted to frequent whistle blowing, which leads to curbing the fun and excitement, stressing that the fun of football is by providing opportunities to play and the continuation of the match and not stopping it without reason, Considering that the referee of matches should not stop the game except when absolutely necessary, stressing that this matter is due to the lack of international experience of some stadium judges.

Al-Shamsi indicated that the resort of some referees to the frequent use of the video referee in every small and large case, is caused by the absence of the referee’s personality and his confidence in himself, considering that the presence of the referee near the ball reduces his resort to (the mouse), stressing at the same time that giving an extra time in the match It is also caused by the frequent use of the whistle and resorting to (the mouse) together.

A member of the Vice-Chairman of the Technical Committee of the former professional league, Muhammad Saeed Al-Nuaimi, stressed that any football player realizes that arbitration errors are part of the game, considering that the presence of the video referee (the mouse) is a strong assistant to the referee of the arena in managing the match, stressing the importance of having harmony Between the referee arena and video referee.

Al-Naimi added: “The video referee (the mouse) has become the main concern in the match management process and how he directs the referee in managing the match, since the latter takes his decision in a fraction of a second, especially in cases where there are penalties or goals, as (the mouse) Verify whether the decision is correct or not.

Al-Nuaimi believed that refereeing errors will not disappear or decrease because they are part of the game.

In turn, the former international referee, Abdullah Al-Ajeel, confirmed that the lack of focus and the inclusion of inexperienced referees is behind the poor refereeing performance in some league matches.

The urgent questioned whether there is psychological preparation for referees or not, and are the psychological pressures that some court judges are exposed to behind the decline in arbitration performance?

He added: «There is something abnormal that happens to some referees during their management of matches in the league, so do some of the referees have a fear of falling into an arbitral error, as you notice that there is a lack of harmony between the referee of the arena and the rule of (the mouse), especially in the last round of the league, which I have seen refereeing errors that have never happened before.”

Al-Ajla stressed that there are referees who do not enjoy managing matches, and tension was noticed on them, whether through their use of the whistle, or in the way they deal with the events of the match, as well as their dealings with the players.

1- The referee of the match between Sharjah and Khorfakkan cancels a part kick for Khorfakkan after using the mouse.

3- The referee of the Al-Nasr and Al-Wasl match cancels a penalty kick for Al-Nassr after using the mouse.

4- (The mouse) cancels a goal for Al-Wasl in the Al-Nasr goal.

5- The referee of the match Dibba Al-Fujairah and Ajman uses the “mouse” to calculate the first goal of Ajman against Dibba.

6- The referee of the match Dibba Al-Fujairah and Ajman uses the mouse to calculate a penalty kick for Ajman, from which he scored his second goal.

The interventions of the judges of the 4 stadiums

1- The principle of play is not available to the players of both teams.

2 - Frequent use of the whistle in every small and large during the match.

3- The frequent use of video referee technology (the mouse).

4- Granting an added time in some matches that reaches more than 6 minutes without justification.