Sharjah sings outside the flock.. Pereira is "Dorina's sign"

Sharjah took the lead in the ADNOC Professional League after Al Jazeera stumbled against Bani Yas, becoming the "King" the only team with the full mark in the tournament from four victories, after winning an important victory over its guest Khorfakkan by three clean, while Al Jazeera fell to second place after losing a 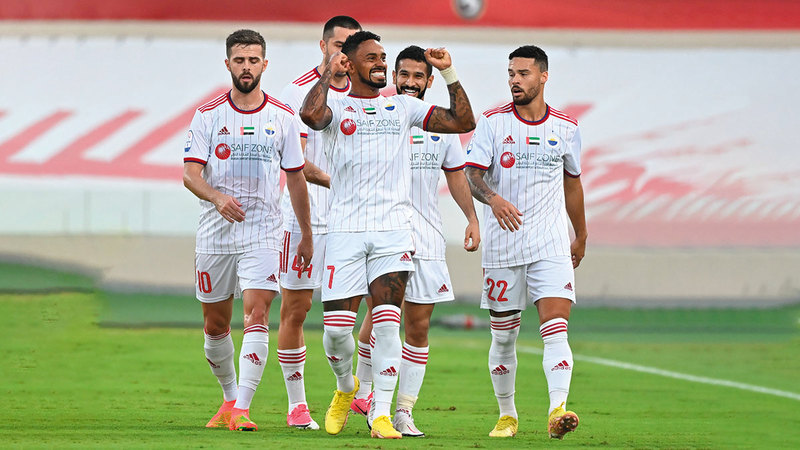 Khaled Obaid: The decision to dismiss the coach of Al-Wahda is strange

Sharjah sings outside the flock.. Pereira is "Dorina's sign"

Sharjah tightened its grip on the lead with the brilliance of Caio Lucas and the rest of the stars.

Sharjah took the lead in the ADNOC Professional League after Al Jazeera stumbled against Baniyas, becoming the "King" the only team with a full mark in the tournament from four victories, after winning an important victory over its guest Khorfakkan by three clean, while Al Jazeera fell to second place after losing the first two points in championship.

Baniyas deserved the point of a tie against Al Jazira despite the numerical shortage in the match that witnessed a bad level of Al Jazira players for the first time this season, and thanks to its important victory over Al Nasr, Al Wasl managed to reach third place in the standings table after achieving an important victory away from home, reaching the point The eighth for the team to appear in the adult box, which is what the “Emperor” is looking for at the end of the league.

Al-Ain regained its luster with three goals against Ittihad Kalba, jumping to fourth place on the table, and continuing its quest to catch up with the "leading" Sharjah team in a season that seems to have become more clear with the passage of rounds, as "Al-Sharqawi King" is the most team that has attracted stars and great deals to be The result is the singles lead of four consecutive victories.

In a sudden failure, Al Dhafra managed to achieve an important victory over Al-Ahly youth, who always won by specializing in this match, but he did not succeed in this round, so Al Dhafra achieved his first victory and three precious points that were enough to leave the bottom area and the last place, which is currently settled by the Khorfakkan team led by The national coach, Abdulaziz Al-Anbari, who became in a difficult situation after collecting only one point from four matches.

The fourth round changed a lot of the features of the ranking table after the Ajman, Al Wahda and Al Dhafra teams succeeded in achieving their first victory in the tournament after four rounds, at a time when victory declined and he did not take advantage of the opportunity to play on his land in order to reconcile his fans, who attended well to confront Al Wasl fans in the match. , But the summit came out yellow in a match and a great summit that brought the two teams together.

"Emirates Today" monitored the audience's opinions with a question via the social networking site "Twitter" about the best player in the Arab Gulf League and the most influential player with his team after four rounds: "We shared the opinion... After four rounds of the ADNOC Professional League, who is the most prominent player in our league?" So far?”, four players have been spotted: Luan Pereira, the Brazilian resident Sharjah player, Moroccan professional Walid Azzaro from the Ajman team, Laba Kudjo (Al Ain), and Ali Mabkhout (Al Jazeera).

The audience participating in the vote, which reached 112 participants, chose Luan Pereira, the Sharjah player, with 39.8%, then Al Ain player Laba Kudjo, 29.6%, Ali Mabkhout, Al Jazira player 17.3%, and then the Moroccan player Walid Azzaro from Ajman 13.3%.

Technical analyst Khaled Obaid confirmed that the fourth round of the league championship revealed the eligibility of the Sharjah team to lead the championship, as he confirmed that it is the most ready team after achieving four consecutive victories in the championship, to be the only team that succeeded in this, noting that the Al-Jazira team did not He presents in this round what he did in the previous three rounds, to lose the first two points in the tournament.

Khaled Obaid told "Emirates Today": "Al-Wasl won an important victory over Al-Nasr because he knew how to deal, read the match well and played on Al-Nasr's defensive problems, but Al-Wasl's victory does not mean that it does not need to strengthen its ranks, especially if the team wants to compete for the league title. , Ajman and Al Wahda returned to the championship by achieving the first victory in the championship to ignite the center region, as for Khorfakkan and Dibba, it seems that the season will be difficult for both teams.”

Obaid praised the Al Dhafra team after the great victory over Al-Ahly youth, stressing that it was the team that benefited most from the pause period to return the team to the path of victories, while Obaid explained that Al-Ahly youth must recalculate well, in addition to Al-Jazira, who did not provide the required level, and added: « This may be because the players have been away from the team for a while due to their presence with the national team, and the decision to dismiss the coach of Al-Wahda is strange and at a difficult time, and the team may be greatly affected.”