The fourth round of the first division revealed artistic scenes that inflamed the feelings of the "amateur" audience, through performance, distinguished results, beautiful goals recorded in overtime, and the return of television transmissions, which is expected to contribute to raising the marketing value of the tournament in which 17 are participating. 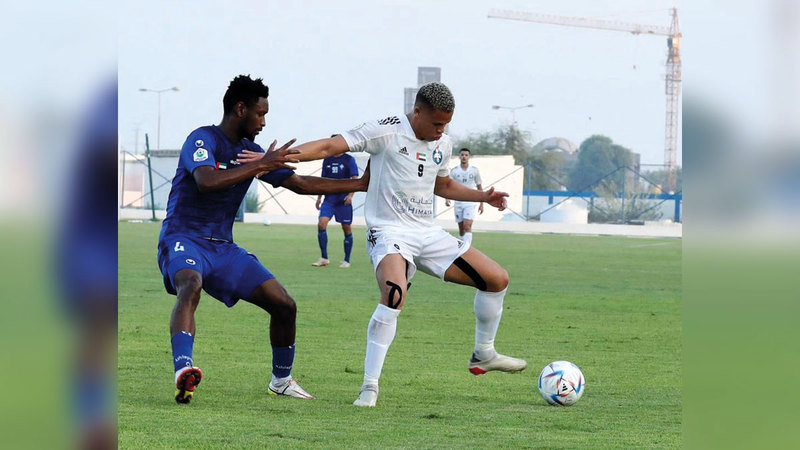 From the Arab match and cooperation in the first division.

The fourth round of the first division revealed artistic scenes that inflamed the feelings of the "amateur" audience, through performance, distinguished results, beautiful goals recorded in overtime, and the return of television transmission, which is expected to contribute to raising the marketing value of the championship, in which 17 teams participate, in addition to the presence of Featured audience in most matches of the tour.

The results of the fourth round, which were held on Friday, Saturday and Sunday, resulted in Fujairah winning over Al-Orouba and Al-Rams on Al-Jazirah Al-Hamra and Baynunah over the "Knights of Hispania" with the same result (2-1), Masfout over Masafi, and Al-Arabi over Al-Taawon with a clean goal, while Al-Dhaid tied with Al Hamriya, with one goal, Hatta beat Gulf FC (4-3), while Dibba Al Hisn beat City, 5-0.

Al-Arabi leads the standings with 10 points, then Dibba Al-Hisn 9, then the Emirates, Al-Jazirah Al-Hamra and Al-Rams 7, Al-Orouba and Masfout 6, Fujairah, Al-Dhaid and “Siti” 5, then Al-Hamriya and Al-Taawon 4, and with a score of 3 points, Masafi and “Gulf FC” come, Hatta, Baynunah, and the Knights of Hispania.

Here are the highlights of the fourth round.

The citizen coach, Dr. Abdullah Al-Misfer, returned to the training front after his absence from the technical area last season, as the Hatta club management contracted with him as a coach for the first team, after the dismissal of the former North Macedonian coach Gojica, which reflects Hatta's aspirations to rise again and play in the ADNOC Professional League.

Everyone is a winner

All teams in the first division succeeded in tasting the result of the victory, after they played 32 matches, and the Fujairah, Hatta and “Baynouna” clubs achieved the result of winning once, while Al-Arabi and Dibba Al-Hisn lead the teams in the number of wins with three victories each.

The television broadcast of the matches between Al-Rams and Al-Jazira Al-Hamra, and Al-Dhaid with Al-Hamriya, topped the front of the fourth round, due to the importance of the transfer in increasing the marketing value of the competition, especially since it is the first time that two matches in the first division have been transferred in two consecutive days.

The Gulf FC team succeeded in providing good technical levels in all the four matches it played, although it lost in three matches. It can be described as the best losing team.

Al-Rams Club continues to present its Mauritanian resident player, Ahmed Al-Wali, in a distinguished manner since the start of the season, as he scored two winning goals against Al-Jazira Al-Hamra, bringing his score to five goals, which is half of what the team scored in its four matches through his movements similar to those of Al-Wasl Lima player.

The results of the fourth round paved the way for Al-Arabi to lead the standings of the championship teams with 10 points, and the sons of Umm Al Quwain benefited the most from the loss of the former leader Al-Jazirah Al-Hamra, and the Emirates team did not participate in the round competitions, in addition to the loss of Al-Uruba in the Fujairah derby.

The fourth round of the First Division League confirmed the great development in the technical level of the championship teams, and their matches with high clubs until the final whistle. Al-Hosn Ahmed Al-Mutawa 91, and Fujairah player Okasha Hamzawi 93.

The Hatta team achieved the first "remontada" in the current season in the first division, after overturning its delay in front of the "Gulf FC" team by 3-1 to win (4-3), a result that changed the standings of the championship teams, and confirmed that Amateur competitions are parallel to professional competitions in many technical aspects.

Fujairah and Al Rams teams succeeded in resolving the results of the derby matches in their favour, after Fujairah beat Al Orouba at the latter’s stadium (2-1) in a match attended by a large crowd. Al Rams also beat its guest Al Jazira Al Hamra with the same result, and Al Dhaid tied with the first candidate to ascend, Al Hamriya team (1 -1) A distinguished result in the third derbies, whose results changed a lot in the features of the standings of the championship teams.

Omani Dibba Al-Hisn player Mohammed Al-Marboui scored his first hat-trick of the season against the City team, which led him to the top scorer in the tournament, and led his team Dibba Al-Hisn to the runner-up position.