With varying success: how Mamedov and Murtazaliev won victories in Bellator, and Oleinik and Borshchev lost in the UFC

On the night of October 2, tournaments of the two largest MMA promotions on the planet were held in the USA. Alexey Oleinik could not oppose anything to Ilir Latifi and suffered his 17th defeat in his career, while Vyacheslav Borshchev lost to Mike Davis at UFC Fight Night 211. In turn, at Bellator 286, Islam Mammadov won a landslide victory over Nick Brown and made an application for getting into top 5 of the lightweight division, and Khalid Murtazaliev knocked out compatriot Khadzhimurat Bestaev. Vladimir Tokov failed to please his fans, losing to JJ Wilson. 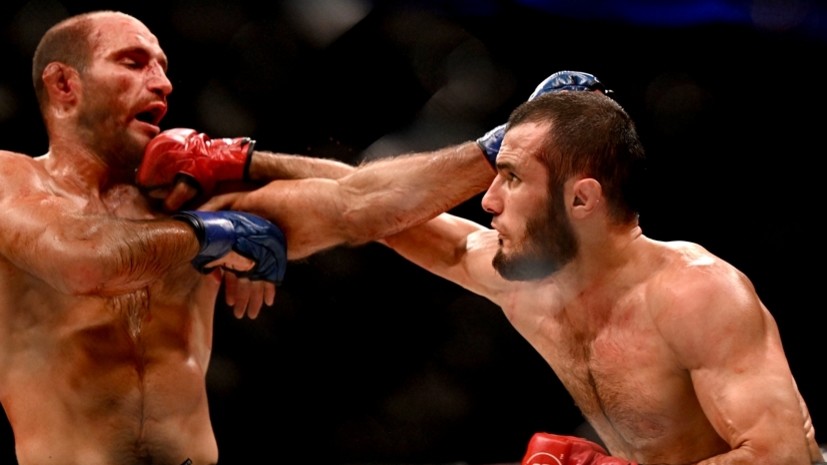 Defeats of Oleinik and Borshchev

Initially, the UFC Fight Night 211 tournament promised to be remembered for the performance of three Russian fighters at once, but due to unforeseen circumstances, their number was reduced to two.

No luck for Maxim Grishin, who hoped to win a second victory in a row and finally gain a foothold in the largest MMA promotion.

The ex-WFCA champion was seen as the favorite of the duel, bookmakers also gave preference to him, but the opponent did not allow him to confirm this in practice.

In recent years, Filipe Lins has solidified his status as one of the unluckiest and at the same time unreliable representatives of the league.

Since November 2020, six fights with his participation have been canceled at once, and in most cases the Brazilian was the culprit.

Among the failed opponents was Azamat Murzakanov, and veteran Ben Rothwell, whose meeting with the Brazilian was canceled three times in a row, suffered the most.

And this time, the winner of the PFL Grand Prix also caused the fight to fail.

The matchmakers hoped to the last that he would be able to enter the octagon, and for this they even moved the duel to the main card, but this did not help.

As a result, Alexey Oleinik was the first among the Russians to enter the cage, for whom the battle with Ilir Latifi was the 67th in his career.

And it turned out extremely badly.

In the first round, the Russian missed a takedown and could neither return to a vertical position nor create serious problems for him on the ground.

But he himself received serious damage in the form of a cut on his right eyebrow.

True, it was opened not as a result of a hit with a fist or an elbow, but a forbidden blow to the head.

The two remaining rounds did not change the situation much.

In each of them, Oleinik allowed the opponent to perform one pass to the legs, and although he spent much less time on the ground, he also could not oppose Latifi in the stance.

According to the actions of Alexei, it was absolutely not clear with what plan he went into battle and due to what he was going to take over.

In percussion technique, he definitely did not surpass Ilir, and he himself refused to provoke the transition to the “zero floor”.

Oleinik had one of the darkest fights during his time in the UFC and suffered a well-deserved defeat.

All three judges sided with Latifi and did not give the Russian a single round - 30:27.

His problems on the ground have been known for a long time.

But it’s one thing when they are shown by a strong grappler and purple belt in Brazilian jiu-jitsu Mark Diakesi, another is former boxer Mike Davis.

Yes, at school the American also paid attention to wrestling, but obviously not as serious.

This is confirmed by the lack of appearances at the NCAA national championships.

However, against the background of the counterpart, Davis looked like a hardened fighter and over and over again transferred him to the ground.

In total, Borshchev found himself on the floor seven times and spent more than half of the fight from below in total (8 minutes 2 seconds).

Moreover, Mike not only controlled Vyacheslav, but threatened him with a knockout.

Already in the first round, the Russian was under a flurry of blows and almost forced the referee to intervene.

Looking at the statistics, one might get the impression that Borshchev looked stronger than Davis in the two remaining rounds, but sometimes the numbers can be deceiving.

Although he had significantly more hits (42:28), but it was the American who was closer to an early victory.

In the second segment, he almost caught the Russian on a hand triangle, and in the third he almost fixed a choke from behind.

In this regard, the decision of one of the judges to give Mike a victory with a minimal advantage (29:28) raises serious questions.

The scores of the other two members of the jury (30:26) are much more in line with what happened in the cage.

Knockout by Murtazaliev and dominance by Mammadov

The series of failures of Russians in the American top promotions was interrupted only at the Bellator 286 tournament, which this time was broadcast at a later time than the UFC show.

Although this could not happen only in the event of an extraordinary situation.

Indeed, within the framework of the preliminary card, two domestic athletes met with each other.

The more titled Khalid Murtazaliev demonstrated his superiority in the class and dealt with Khadzhimurat Bestaev without any problems, simultaneously closing the insulting defeat from Anthony Adams.

In the first round, the fighters decided to compete in kickboxing, and already in the course of this segment, the difference in skill became clearly noticeable.

A minute before the end, Murtazaliev had not only ten more hits (19:9), but also boasted an incredible percentage of accuracy (95%).

Only one of his blows did not reach the target, while Bestaev, although he attacked more often, mostly hit in the air.

As it turned out, if in the standing position the lanky Khadzhimurat at least kept Khalid at a relatively comfortable distance for himself, then in the stalls he could not oppose anything to his compatriot.

It all started with a powerful high-kick that forced Bestaev to the floor, continued with a two-leg pass, and ended in a full mount.

It took Murtazaliev about two minutes to get into a dominant position and, with the help of a hail of blows, provoke a stoppage of the fight.

The confrontation between Vladimir Tokov and JJ Wilson turned out to be much more competitive.

Alternating victories with defeats, the representative of the Fedor Team flatly refused to fight in the standing position and relied on the fight.

And not to say that the plan completely worked.

Although he managed to lay his counterpart on canvas, the quirky New Zealander looked more than impressive even on his back.

During the round, he twice caught the Russian in a triangle, tried to throw a homo payment and, in general, made more attempts to end the battle ahead of schedule.

It would seem that this should have forced Tokov to shift the vector a little and at least try to compete with Wilson in percussion technique.

But in the remaining ten minutes, nothing changed.

Almost the entire fight took place on the floor, where everyone tried to use their strengths.

Vladimir controlled the opponent from above and demonstrated ground and pound skills, while JJ was looking for his luck in submissions.

True, in the second round he did not succeed so well.

As a result, the last segment became decisive, during which Wilson again performed a lightning-fast transition and made his way behind Tokov, but the choke from behind did not pass.

The Russian regained control and did not miss it until the gong, but failed to impress the majority of the judges.

Only one took his side, while the other two preferred the New Zealander.

In theory, a battle with the participation of another domestic fighter could have taken place in the same vein.

Famous for his ability to keep his opponents on the ground, Islam Mammadov met with the black belt in Brazilian jiu-jitsu Nick Brown.

However, the opponents unexpectedly spent most of the fight on their feet, and the Russian had a no less overwhelming advantage than on canvas.

Already after the first round, two unpleasant cuts appeared on Brown's face, and by the end of the third his face was covered in blood.

Mammadov was better in all aspects and allowed the opponent to catch his breath a little only in the clinch at the net.

In percussion technique, he was stronger, and in the fight he did not leave any chances.

In each of the segments, he once transferred the American to the floor and only once allowed him to show off his skills in BJJ, but the submission attempt was unsuccessful.

Islam himself managed to work both in the semi-guard and in the side control position and looked great everywhere.

After such a performance, the judges could not have doubts about the winner.

Mammadov took over by unanimous decision and made an application for getting into the top 5 of the lightweight division.

Before the start of the tournament, he was on the seventh line and, with a successful scenario, may well overtake both Alexander Shablia and Brent Primus.