There was a point of cruelty in Sergio Pérez's victory over Ferrari in Singapore, where Charles Leclerc once again wasted his pole position and Carlos Sainz had enough to hold on... 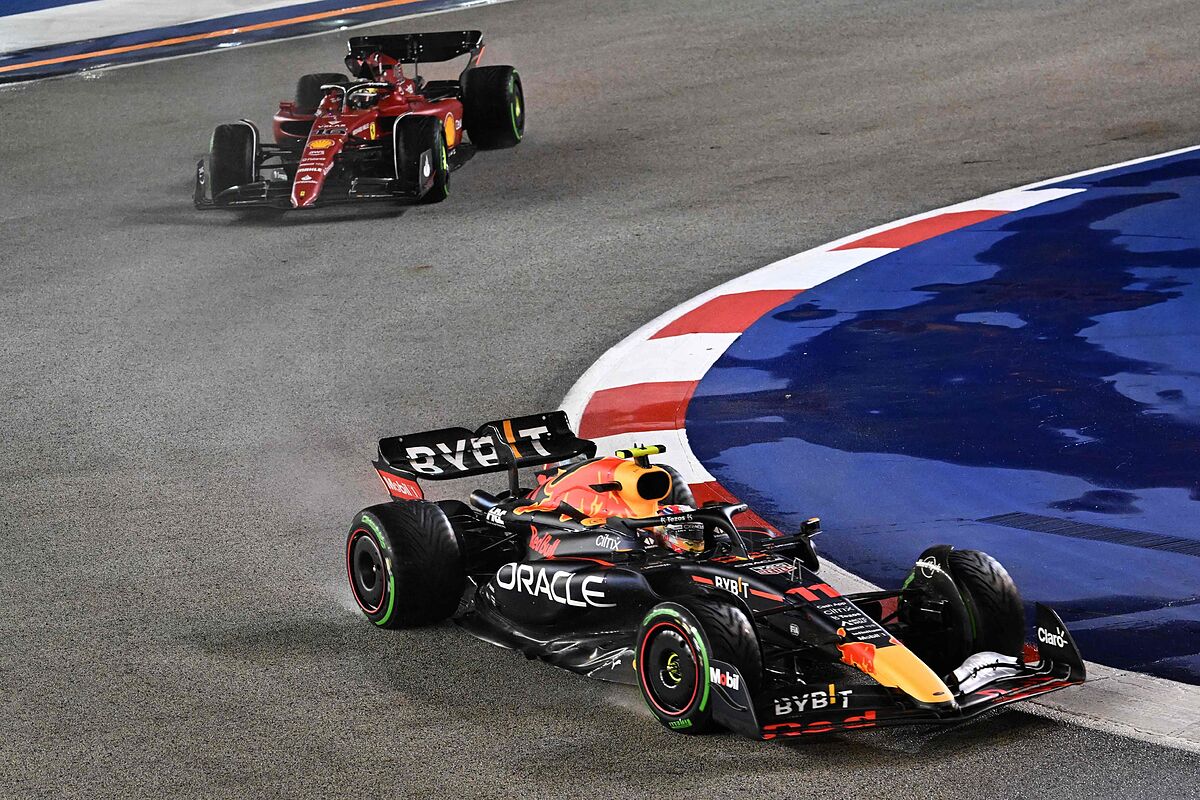 There was a point of cruelty in

's victory over Ferrari in Singapore, where

had enough to hold on to his position on the podium.

After more than two hours, on a wet and treacherous asphalt, the Mexican resolved the situation with unprecedented ease, as if he were

himself , relegated all night to distant positions in the lead.

Neither in the absence of the next champion, nor under the sword of a sanction against Pérez, due to an irregular double maneuver on the exits, did Ferrari know how to win at Marina Bay.

Checo needed to vindicate himself, because since his victory in Monaco he had not complied with what

That is why he attacked Leclerc from the start and bravely crossed every meter of this intricate urban track.

With just under half an hour on the clock, the Monegasque also had the advantage of the DRS, finally activated by the stewards after an eternal wait.

Pérez was on the ropes, the victim of a power delivery failure.

Nor was Sainz going through his best moment, struggling with the Ferrari to contain Norris.

In a couple of laps, however, the situation turned around.

A skid caused Ferrari to lose almost a second to 16 against an increasingly consolidated leader.

Sainz caught his breath for his eighth podium finish of the year.

If he stayed within that range, a hypothetical punishment to the leader would give him victory.

Not even that could the Monegasque, who crossed the finish line at almost seven.

When Checo got off the RB18 exhausted, not even the strictest judge could object to his victory.

The first regrouping took place after the contact between

, which put both out of action.

Only eight laps had passed, so there was no more news than the traditional parade in single file after the

Verstappen, who was sweating ink after

, not only recovered the half minute he had been losing against the leaders, but at the same moment of the restart, he surprised the Aston Martin at turn 5. And after getting rid of

, he began his particular battle against Alonso.

In his wake, he lost two seconds per lap with respect to the head.

Until the Alpine's engine seized and the Spaniard, in his 350th race, was stranded in the loophole at turn 10.

Sainz was never able to compete against Leclerc in his first stint with the intermediates and was already content to keep Hamilton at bay.

He was riding third thanks to his push at the start, when he did not hesitate to take out the Mercedes leader.

Towards lap 18, the Ferrari engineers ordered him to cool the tires due to the wet areas of the asphalt.

The first to dare with dry tires was

, who had started from the

and had nothing to lose.

It was a reckless move that caused him to lose more than three seconds per lap.

The finding for the favorites, that they should still take a little longer.

Clear that the victory would be played in the strategy.

The question was to choose the right moment for the decisive stop.

embedded the front wing of his Williams against the protections of turn 8, the first threat came.

's breakdown , with his engine shattered, rattled nerves during the

But neither team made a move in the

There was panic to be the first.

Finally, on lap 35, Leclerc paraded, with such bad judgment that he was unable to stop the car: 5.3 seconds in the process, more than double that of Pérez and Verstappen, who also placed averages.

Hamilton had already lost his options with an erratic braking against Sainz.

He was even able to cause some severe upset by rejoining ahead of Verstappen, front wing trailing.

Without a moment of respite,

and the work to restore the protections confirmed the evidence: there was no time to complete the 61 laps.

That rush must have affected Pérez, whose irregular maneuver in the restarted race did not go unnoticed by the stewards.

And even more to Verstappen, author of a resounding mistake against Norris.