A bold game from Karpin, successful substitutions for Semak, Malcolm's high class: Zenit defeated Rostov and strengthened its leadership in the RPL

Zenit beat Rostov in the 11th round of the RPL and strengthened their leadership in the table. In the first half, the southerners more often owned the ball and tried to play the ball from the bottom of their own goal, but could not cope with the opponent's high pressure. Malcolm, taking advantage of Viktor Melekhin's mistake, scored a beautiful goal already in the 14th minute. Immediately after the break, Valery Karpin's wards equalized thanks to an accurate shot by Nikolai Komlichenko. However, the successful substitutions of Sergei Semak helped the Petersburgers put the squeeze on the guests. Ivan Sergeev made an assist to Vendel, and Daler Kuzyaev converted one-on-one. 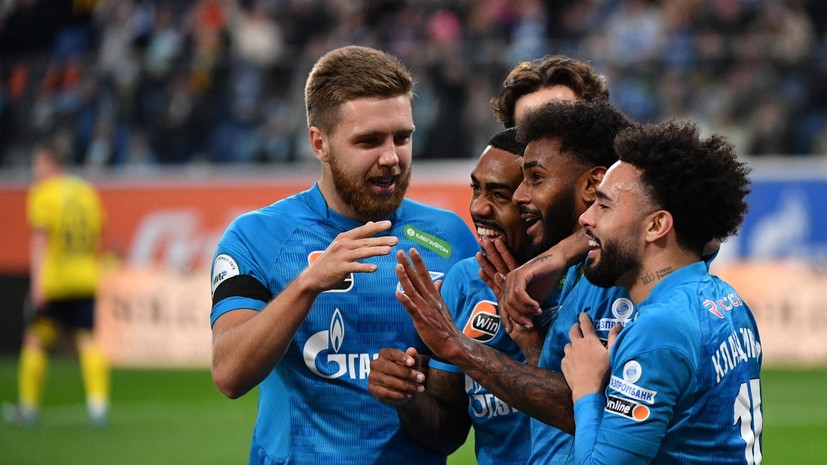 In the summer, few could have imagined that following the results of the first third of the RPL season, Rostov would be the main pursuer of Zenit.

Petersburgers retained almost all of their leaders, while the southerners lost most of the legionnaires in the spring.

However, the wards of Valery Karpin started the championship great and, along with the team of Sergei Semak, still did not know defeat in the national championship.

But the meeting with the main hegemon of domestic football was a real test of strength for them.

The guests had to prove that they are currently able to compete even with him and have matured to fight for medals.

The hosts also had a great opportunity to further strengthen their leadership in the standings, because in case of victory they increased the gap from the second line from four points to six.

It was no less interesting to watch the confrontation between the two most successful domestic coaches of recent years.

A clear advantage turned out to be on the side of Semak, who in eight meetings with Karpin's Rostov won five victories with one draw and two defeats.

At the same time, both teams lost in the Russian Cup this week.

The blue-white-blues allowed themselves to be defeated in Moscow by Spartak, and the yellow-blues lost to Akhmat in Grozny.

However, compared to the derby of the two capitals, two key changes occurred at once in the starting lineup of the hosts.

First, Claudinho, who had recovered from an injury, returned to action.

Secondly, Wilmar Barrios arrived from the location of the Colombian national team.

Perhaps the only intrigue was who would take a place on the edge.

And Semak threw into battle not Ivan Sergeyev, as in recent meetings, but newcomer Mateo Cassierra.

But the guests approached the key confrontation without loss.

This guaranteed the fans an uncompromising struggle from the first to the last minute.

It seemed that Rostov, in confrontation with the leader, could choose a more accurate style and focus primarily on defense.

But the yellow-blues decided not to give up their signature game and constant control.

As a result, they had 57% possession of the ball before the break.

It was even more surprising that Zenit accepted the opponent's idea and did not seek to seize the initiative at all costs.

On the contrary, the Petersburgers calmly gave the ball to the guests.

But the key moment for them was successful pressure.

Wards Semak highly met opponents in the final third of the field and did not allow them to leave the defense.

They took advantage of the fact that Karpin's team tends to take the ball down from their goal, and not throw it with long passes.

Not surprisingly, the young defenders of the southerners were lost under pressure.

It worked already in the 14th minute, when Viktor Melekhin, having played in a tackle, made a pass to Claudinho.

He instantly threw Malcolm into the gap, and the tenth number perfectly figured out the episode.

In someone else's penalty area, he immediately went away from three counterparts and carefully shot into the far.

After that, Zenit finally retreated to its own half and relied on counterattacks.

The defending champions ran forward whenever possible, taking advantage of the huge zones between the lines, and creating chances.

For example, in the added time to the first half, only Sergei Pesyakov, who made a double save, prevented Andrey Mostovoy from increasing the lead in the score.

"Rostov", although more often in possession of the ball, practically did not penetrate into someone else's penalty area and delivered only two inaccurate shots with 13 from the opponent.

True, the guests had reason to be dissatisfied with the judge.

At the 33rd minute, Dejan Lovren, trying to take out, hit Nikolay Komlichenko's foot, but neither Vladimir Moskalev nor his assistants on VAR recorded a foul from the Croat.

And a little later, Komlichenko threw a projectile past Mikhail Kerzhakov and fell, colliding with him.

The referee's whistle was silent this time as well.

The replay showed that the referee was right - the attacker rather feigned.

However, at the very beginning of the second half, the efforts of the guests finally paid off.

Even before the break, they tried to put pressure on the left flank of the opponent's defense, where Andrei Mostovoy did not always have time to help Douglas dos Santos, and in the 47th minute they benefited from this.

Just Mostovoy did not cover Alexander Silyanov's serve, and Komlichenko, ahead of the defender, from the goalkeeper's line sent the ball on target with a rebound from the crossbar.

In parallel, Nikolai reaffirmed that Zenit can be called his favorite team, because he upset her in the fourth match in a row: three in Rostov and one in Dynamo.

Petersburgers reacted to the incident calmly and without unnecessary emotions.

The subsequent game was in many ways reminiscent of what happened in the meeting with Spartak in the RPL a month earlier, when the red-whites took the lead.

Faced with the need to add speed, the hosts did it easily and once again demonstrated that when they turn on 100% and catch the mood, it is almost impossible to stop their rivals in the national championship.

This happened on Sunday at the Gazprom Arena.

Instead, Karpin had to throw into battle mostly young players who were unable to turn the tide of an unsuccessful game.

But Semak had much better reserves.

So, Sergeev, who replaced Cassier at half-time, elegantly played in the wall with Wendel in the 65th minute and helped the Brazilian bring Zenit forward.

Daler Kuzyaev converted one-on-one and set the final score on the scoreboard.

And Gustavo Mantua missed two moments in the end to bring the matter to a rout.

Once again, the legionnaires from St. Petersburg also showed themselves brightly, without which the team is hard to imagine.

According to the Whoscored portal, Malcolm became the best in their composition.

The Brazilian not only scored a beautiful goal and gave a great cutting pass to Kuzyaev, but also completed seven passes under attack.

Wendel in the episode with the second goal subtly understood the situation, beautifully outplaying Pesyakov from an acute angle.

And Barrios was the best on the team in tackles (4).

In summary, the match in St. Petersburg once again confirmed that the fate of the championship is completely in the hands of Zenit.

Blue-white-blue are head and shoulders above all opponents and can only give one of them a title.

But so far they do without recessions and almost do not lose points.