This afternoon, attention is directed to the Dubai Water Canal in the Al Jaddaf area, opposite the Dubai Creek Wildlife Sanctuary, which is witnessing the launch of the Dubai Rowing Local 30-foot Championship (the first round), organized by the Dubai International Marine Club as part of the races calendar in the region. 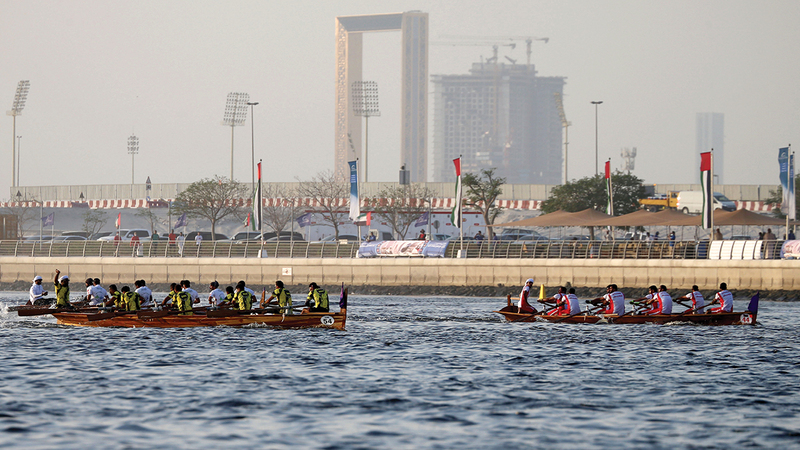 47 boats compete in the first rounds

The event brings together over 400 sailors.

This afternoon, attention turns to the Dubai Water Canal in the Al Jaddaf area, opposite the Dubai Creek Wildlife Sanctuary, which is witnessing the launch of the Dubai Rowing Local 30-foot Championship (the first round), which is organized by the Dubai International Marine Club as part of the racing calendar for the 2022-2023 sports season. .

Today, the heritage marine sports event brings together more than 400 sailors on 47 boats, embodying one of the epics of the past of fathers and grandfathers.

Today's event is attended by the people of the sea from the Gulf Cooperation Council countries, who represent the Kingdom of Bahrain and the Sultanate of Oman through four boats.

The local class race grabs attention through the large participation of 33 boats, which confirmed their participation before the registration door closed the day before yesterday, as they will compete for the first places, while the open class race brings together Gulf boats and institutions 14 boats, which reflects the interest and increase that has occurred since the launch This category last season.

The boats of institutions and companies in the UAE compete, led by boat No. 89 (F3), Dubai Police boats 3 and 33, Dalma Marine boats 7 and 60, Mataf Society of Marine Arts boats 46 and 62, Silver Rock Ceramic 19, Jumeirah 4, Classic Real Estate 8, and their competitors. Among the boats of the Gulf Cooperation Council countries, Bahrain is represented by the boats KHK 54 and Victorious 53, while the Sultanate of Oman competes with the boats 44 and 96.

Qualification for the most expensive tournaments

Today, all boats participating in the first round of the Dubai Rowing Championship 30 feet are seeking to achieve good results among the adults in order to ensure that they obtain the points that qualify them to participate in the Al Maktoum Cup, the most expensive rowing championship, which will be held in its 26th edition on 24 next December.