Fight of actors from "Kadetstva", Shokka's revenge on Zhigan and Dzhigurda's victory over Milonov: the brightest fights with the participation of stars

Actor Alexander Golovin defeated his colleague Kirill Emelyanov, with whom he played together in the series "Kadetstvo". The young man who played the role of Maxim Makarov performed several powerful combinations and forced the opponent to surrender. Earlier, a battle of this format was held by Nikita Dzhigurda, who left no chance for State Duma deputy Vitaly Milonov. And in the most striking duel with the participation of rappers, Shokk turned out to be stronger than Zhigan, thus avenging the humiliation recorded on video. What ended the most memorable confrontation with the participation of Russian stars according to the rules of boxing and MMA - in the material RT. 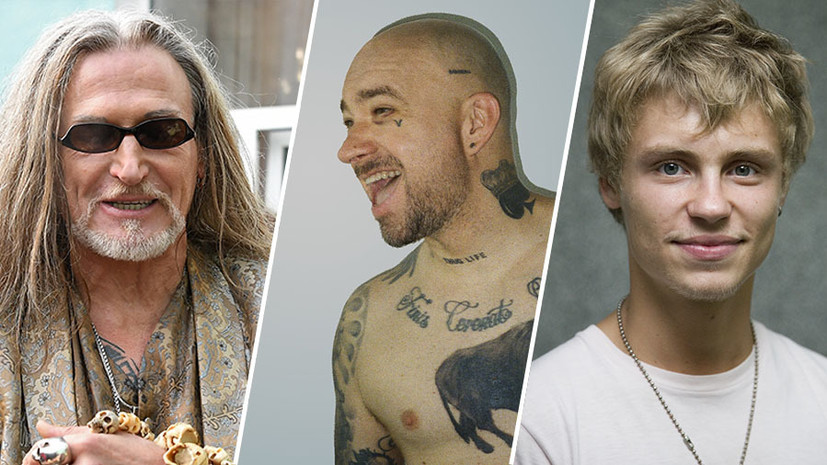 The amazing power of Golovin

Fights between representatives of show business have long been difficult to surprise anyone.

The tradition of so-called pop-MMA originated in the West, and later spread to Russia.

Ordinary people watch with great interest the confrontations in the "cage" of famous actors and singers.

Their broadcasts on the Internet, as a rule, collect hundreds of thousands of views.

One of the most recent events of this kind was the fight between Alexander Golovin and Kirill Emelyanov, who played together in the popular TV series “Kadetstvo” in the second half of the 2000s.

The first played one of the main roles - Maxim Makarov, and the second - the anti-hero Alexei Syrnikov, nicknamed "Nit", who constantly performed ugly acts and clashed with other cadets.

15 years after the filming ended, noticeably matured young people decided to put an end to that story as part of the Our Business promotion, which regularly organizes such meetings.

Moreover, the formal reason was bullying on the set by Yemelyanov in relation to another cult character in the Perepechko saga (Pavel Bessonov).

Cyril was considered the clear favorite.

Firstly, he turned out to be noticeably larger than the opponent - 11 cm taller and heavier by as much as 17 kg.

Secondly, he was extremely confident in himself and, for example, offered to deal with both Golovin and Bessonov in one evening.

However, in the “cage” a complete fiasco awaited him.

With a time limit of three rounds of two minutes, he did not last even one.

A fast and active opponent immediately began to break the distance and deliver powerful blows to the body.

And then, when the "Nit" began to lower his arms, he brought several powerful right side hooks.

Yemelyanov had a cut under his left eye, and the judge gave him time to catch his breath.

However, this did not help.

A couple of tens of seconds before the break, Alexander calmly finished off his opponent, after which he refused to continue and gave up.

Having suffered a painful defeat, the actor paid tribute to the opponent, who was well prepared for the duel, and expressed a desire to meet with someone else from his colleagues in the shop.

The very idea of ​​opposing media personalities in martial arts was implemented in Russia back in the 2000s.

Then Channel One held two seasons of the King of the Ring show, in which many famous people fought according to the rules of boxing.

As a result, in the first case, the trainer Edgard Zapashny became the winner, and in the second, the humorist Nikolai Lukinsky.

And in 2021, he actually contributed to the revival of this kind of fights.

The man challenged TV presenter Vladimir Solovyov and producer Iosif Prigozhin, but in the end he unexpectedly met with State Duma deputy Vitaly Milonov, who did not hesitate and accepted the offer.

Despite the fact that, according to the politician, he was engaged in boxing as a child, he had no chance.

Although he is 13 years younger than his opponent, he was noticeably inferior to him in physical data.

In addition, there was a complete lack of relevant experience.

To prevent Milonov from receiving serious damage to his health, the organizers banned blows to the head and reduced the time of the fight to three rounds of one minute each.

Dzhigurda, who entered the ring in the fur coat of his girlfriend Anastasia Volochkova, in the first two segments frankly played with the opponent, dancing around him, and in the final he switched on and finished off with powerful blows to the body.

However, the deputy was not very upset and admitted that the very fact of participating in the fight was a great achievement for him, since he managed to conduct only three training sessions.

The actor stressed that he could easily knock out his opponent in the opening, but felt sorry for him.

Dzhigurda, despite his age, really liked this format, and he repeatedly opposed opponents of different levels of readiness and skill.

For example, after just a month, he left no chance for journalist Otar Kushanashvili, literally beating him up in less than two minutes.

But it was not possible to cope with the blogger Alexander Shpak.

Nikita himself was knocked out in the second round.

Finally, in the last fight, the actor lost to the son of the famous producer Bari Alibasov by a controversial decision of the judges, although he knocked him down.

Of course, the harsh rap performers could not help but figure out the relationship between themselves in the ring.

So, in one of the most anticipated and interesting fights, Shokk and Zhigan met.

In their case, it was not necessary to further stir up interest in the fight, since young people were in conflict with each other for a long time.

In 2011, Zhigan, in the company of friends, attacked Shokka and his comrades, including Oksimiron.

They were forced to apologize to the camera on their knees.

Ten years later, Schokk got the opportunity to take revenge.

At the same time, few believed in his success.

Zhigan was physically stronger, was actively involved in sports and did not doubt his own victory.

The more unexpected was the outcome of a three-round fight according to the rules of boxing.

Hinter spent it competently and did not allow his opponent to do anything.

The first segment went to reconnaissance, in the second Dmitry seized the initiative, and in the final one he began to carry out powerful combinations.

After one of them, the counterpart even had a mouthguard.

Zhigan looked extremely passive and in fact did not cause any damage to the opponent.

Immediately after the fight, he explained this by breaking two ribs, allegedly received two weeks before entering the ring, and presented x-rays as evidence, but the audience did not believe him and booed.

Shokka, on the other hand, was helped to take over by excellent preparation.

According to him, he not only trained regularly, but also sparred.

However, he did not continue his sports career, although right in the “cage” he was challenged by his colleague D.Masta.

Of no less interest was the confrontation between two more underground hip-hop artists Pavel Ivlev, known as Pasha Technik, and David Akhian with the nickname Uncle Jay Eye.

Despite the fact that it lasted less than a minute, the fans enjoyed it.

The technician, who served two terms in prison and does not lead the most sporty lifestyle, immediately made a successful takedown and went into the mount.

However, the beginning of the end for him was the decision of the judge to raise the men to their feet.

In the stand, Ivlev showed himself not so confident and, having missed two strong lefts, was knocked out.

The former participant of the reality show "Dom-2" clearly showed herself in the promotion "Epic Fighting".

She had two fights within its framework and demonstrated good physical readiness and possession of basic skills of striking technique and especially wrestling.

For example, in her debut fight, she easily forced blogger Irishka Chiki-Piki to surrender by holding a choke hold.

The rival was so disappointed that after the end of the fight she kicked Berkova in the stomach.

The recording of the tournament with Elena's participation has collected more than two million views on the Youtube channel.

But the confrontation with colleague Lola Taylor, on the contrary, turned out to be difficult for her.

In the first segment, Berkova herself almost lost by submission, but in the second she still carried out her favorite choke.

After that, she challenged Volochkova, who again came to support Dzhigurda in a fight with Bari Alibasov Jr., but she refused.

Along the way, the actress on social networks suggested that Alexander Emelianenko and Magomed Ismailov meet in the ring, but it’s hard to imagine the organization of fights with them.

But there may well be a confrontation between the singer Olga Buzova and the Olympic figure skating champion Alina Zagitova.

One of the most famous Russian promoters, Vladimir Khryunov, does not lose hope of holding it before the end of the year.

The fight is planned for December, at which time Zagitova is involved in the ice show.

Perhaps the fight will take place a little earlier.

I really want this to happen, it will be a very bright cherry on the already infinitely beautiful cake of Russian boxing.

Information about the fees will appear a little later, but these are very interesting amounts, ”Legalbet quotes Khryunov.

The failed fight of Narcissus

The duel between singer Pierre Narcisse and humorist Nikolai Lukinsky was also supposed to be very intriguing.

The latter, as already mentioned, won the second season of King of the Ring.

A native of Cameroon also participated in the first, but was more remembered for the defeat from Vladimir Epifantsev in 40 seconds.

However, at a press conference before the fight under the auspices of the Our Business promotion, the African promised to take away the same championship belt from his opponent.

“I respect you very much, my dear.

But I think it's time to take that belt away from you.

I see that wherever you go - to the market or to the stage - you always go with him.

Well, how much can you?!

In Africa, I also look like him, ”the singer addressed Lukinsky.

On June 21, Narcissus died of cardiac arrest after an unsuccessful kidney operation, never having time to re-enter the ring.

At the same time, according to the head of the organization Artur Arutyunyan, just a few days before his death, Pierre, once in the hospital, insisted that he was ready to go into the “cage”.

And later, the ex-wife of pop singer Valery Kalacheva promised to sue Our Business.

Allegedly, they neglected the state of her ex-husband.

She was also unhappy that the video from the press conference was posted on social networks without the permission of her relatives.

Moreover, initially Dzhigurda was supposed to meet with Lukinsky, but due to the latter's refusal, on a short notice, he agreed to fight with the humorist Narcissus.