“We live in these realities and hope for the best”: the features of the winter season were discussed at the forum “Russia is a sports power”

Referendums in the Donbass and in the liberated territories, as well as partial mobilization in the Russian Federation, may affect the position of international federations when deciding to lift sanctions from Russian athletes, said Elena Vyalbe, President of the FLGR, on the final day of the Russia is a Sports Power forum. In turn, the heads of the national figure skating federations Alexander Gorshkov and freestyle and Alexei Kurashov noted that in such difficult times it is important to focus on organizing domestic competitions and creating the best conditions for athletes. And the executive director of the FHR, Dmitry Kurbatov, spoke about plans to hold, among other things, the national hockey championship in the three-on-three format. 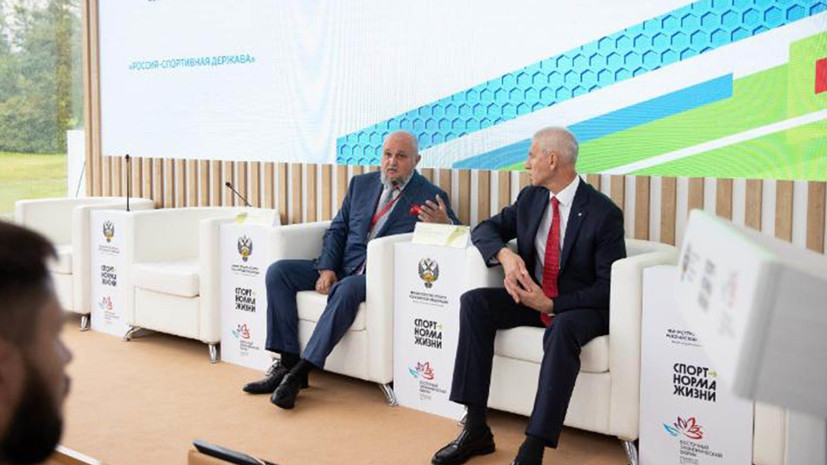 In Kemerovo, the 10th International Forum "Russia - a Sports Power" ended, in which more than 5 thousand people took part.

As part of the business program, more than 50 round tables, sessions and conferences were held, where issues of import substitution in the sports industry, digitalization of the industry, development prospects in the context of sanctions policy and other issues were discussed.

The central session of the final day of the forum was devoted to the upcoming winter season and new approaches to holding competitions.

As Deputy Minister of Sports of the Russian Federation Alexei Morozov noted in his opening speech, the most important thing is to provide athletes with comfortable conditions so that when they come to domestic tournaments, they do not feel the difference from foreign ones.

“They must understand that they are needed and important,” Morozov said.

Elena Vyalbe, President of the Russian Ski Racing Federation, was the first to speak at the session.

She is in Zurich at a meeting of the technical committee of the International Ski Federation (FIS) and joined the discussion via video link.

The three-time Olympic champion noted that there was a working environment at this event and she did not feel any negativity from her Western colleagues.

However, at the same time, according to Vyalbe, “no one really hides” that Russian athletes will not be allowed to the upcoming international competitions.

“We met at all levels, yesterday we had a private conversation with the FIS President.

If before the referendums and mobilization they were still considering the possibility of a neutral status, now these issues have been removed from the agenda.

This situation has greatly complicated everything, but we hope that prudence will prevail, ”explained the head of the FLGR.

In turn, the head of the National Figure Skating Federation, Alexander Gorshkov, said that the successful experience of holding domestic competitions was obtained during the lockdown period, when almost all international tournaments were canceled due to the coronavirus.

“The results of that work were expressed in the high results of our athletes at the 2021 World Championships and the Beijing Olympics.

In the current situation, our federation not only uses this positive experience, but also tries to develop and adapt it to an extraordinary situation in order to maximally neutralize the negative consequences of the exclusion of our athletes from world figure skating,” the head of the FFKKR emphasized.

The basis of the skaters' calendar will be the Russian Grand Prix, six stages of which will be held in the first half of the season on the same dates as the similar ISU tournament.

Jumping tournaments and show programs will be synchronized with the European and World Championships.

This is intentional so that athletes prepare and compete on their usual schedule.

The head of the Russian Freestyle Federation Alexei Kurashov spoke about the need to bring the national calendar closer to the international one.

“The Russian Championship will take place in February, because both the World Championships and the Olympic Games are usually held during these dates.

Of course, this increased the load on the ski resorts, since now everywhere you need to make slopes of the national team level, this is a completely different level.

Now we are working on these details, ”the specialist explained.

The FHR also introduced a number of new competition formats.

According to the executive director of the federation Dmitry Kurbatov, this season it is planned to hold the country's championship in the "three by three" format.

Due to logistical difficulties, the teams will be divided geographically: Siberia, the Urals, the Far East, the Center, the North and the North-West.

The final may be held in Sochi, said the representative of the FHR.

According to him, this type of hockey can be attributed to the mass sport, which attracts wide attention.

Exhibition tournaments that took place at the beginning of the summer, collected more than 85 million unique views on the network.

“This is a very large coverage, which exceeds the performance of classic hockey,” Kurbatov said.

Athletes of the classical teams will not be idle either.

Firstly, the First Channel Cup will be held in December, in which the main teams of Russia, Belarus and Kazakhstan, as well as the Russia 25 young stars team, will take part.

Secondly, the teams will tour with almost the same lineup, except that China will replace the first Russian team.

They will play two matches in several cities.

To date, games in Tula and Minsk have been confirmed, while Moscow, Yaroslavl, Omsk or Novosibirsk are being considered as the third stop.

“There are fears that Kazakhstan will refuse to participate due to external pressure, but in this case we have a plan B,” Kurbatov added.

In addition, three tournaments are provided for junior, youth and women's teams - the Cup of the Future, the Eurasian Cup and the Black Sea Cup.

President of the Russian Snowboard Federation Denis Tikhomirov said that he perceives the suspension from international tournaments as an opportunity to pay more attention to the development of the sport within the country.

“The situation is as it is.

For all its disadvantages, there are also advantages.

In some ways, I’m even glad that we can safely train in our own country, change the format of the competition, come up with something new, ”Tikhomirov admitted.

He noted that he discussed with the Governor of Kuzbass Sergey Tsivilev the possibility of creating a new interesting tournament for snowboarders on Sheregesh, in which professionals and amateurs could take part at the same time.

President of the Russian Biathlon Union Viktor Maigurov in his speech emphasized that all athletes are sympathetic to the current situation.

“There was not a single question about changing sports citizenship.

Moreover, the athlete, who for several years represented another country, has returned and will again perform under the citizenship of Russia, ”Maygurov said.

According to the head of the RRF, the national teams have no problems with equipment either: many companies have expressed a desire to continue cooperation.

Some will provide athletes with equipment free of charge under existing personal contracts, others for a “very moderate” fee.

The only difficulty the team faces, according to Maigurov, is acquiring quality ammunition for weapons that used to be supplied from Germany.

“We are now trying to resolve this issue with our manufacturers.

We live in these realities and hope for the best, ”the functionary emphasized.

Sports 2022-09-30T16:47:57.476Z
“We live in these realities and hope for the best”: the features of the winter season were discussed at the forum “Russia is a sports power”
Sports 2022-09-06T18:41:42.836Z
The Olympics in Paris, alternative tournaments and the protection of the rights of Russians: what sports topics were covered on the fields of the EEF
Sports 2022-09-29T07:30:11.716Z
“At first it was more painful”: Stepanova about the feeling of injustice, the desire to prove herself and media activity
ADS
Sports 2022-09-28T10:16:52.836Z
“I would work and definitely not think about the transition”: Bogaliy on changing citizenship, mobilizing athletes and biathlon problems
News/Politics 2022-10-11T18:46:04.081Z
Germany hopes to pass the winter safely.. Europeans are heading to Algeria and discussing emergency measures to confront the energy crisis
Life/Entertain 2022-07-27T11:06:14.095Z
Creating classic works is a step further than life
Sports 2022-09-04T11:11:21.482Z
International Forum on Urban Emerging Sports Industry and Urban Renewal of CIFTIS held to discuss the prospect of sports industry
News/Politics 2022-10-12T05:34:38.420Z
Ukraine braces for harsh winter after bombing of energy infrastructure
Sports 2022-09-08T15:06:09.242Z
"Let's continue the fight against dirt in hockey": the VHL revised the period of Maltsev's disqualification for a rude reception on Tankov