“September Index”: Brazil is “the champion of the 2022 World Cup”

The international pause for the month of September, which the football teams took advantage of, especially the participation in the 2022 World Cup, has ended, to determine their readiness, less than two months before the start of the “world football wedding.” Perhaps the most prominent technical conclusions in the “September Index” are that Highlight the strength of 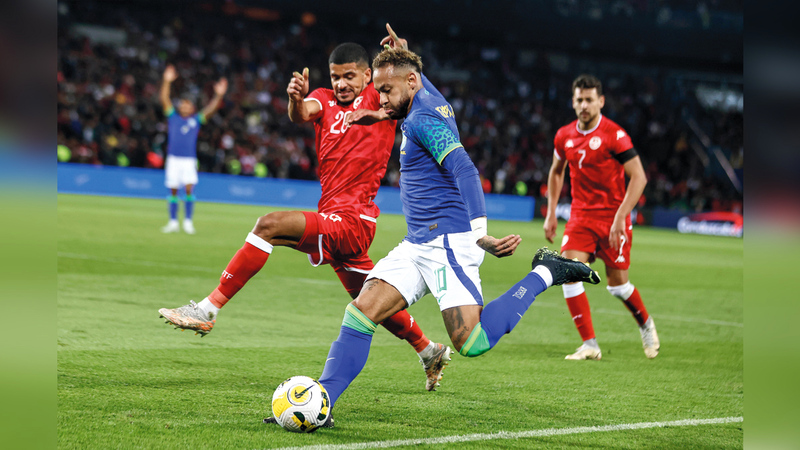 An unreassuring level for most of the big European teams

“September Index”: Brazil is “the champion of the 2022 World Cup”

Neymar appeared at an outstanding level in Brazil's two friendlies against Ghana and Tunisia.

The international hiatus for the month of September, which the football teams took advantage of, especially the participation in the 2022 World Cup, has ended, to determine their readiness, less than two months before the start of the “world football wedding.”

Perhaps the most prominent technical conclusions in the “September Index” highlighted the strength of the Brazilian team led by coach Tite, as the team is at the top of the most prominent candidates for winning the World Cup and restoring the glories of “samba”, after a long period of frustrating participation since the last coronation of Brazil in Korea and Japan 2002 .

The Argentine national team also appeared at a good level, although it did not play strong matches.

Whereas in Europe, the big teams appeared at different levels, as they participated in September in the European Nations League, which is a preparatory tournament.

The Brazilian national team currently has at least two stars in each position, so it is said that “samba” is going to Qatar with two teams, one of which is no less powerful than the other. Tillis, Militao, Lodi, and Danilo.

In the defensive center there are two first-class stars Casemiro and Fabinho, while in the attack there is an unprecedented abundance of a group of international names, led by Saint-Germain playmaker Neymar, as well as Real Madrid strikers Vinicius and Rodrygo, Barcelona star Rafinha, Man United star Anthony, and Tottenham striker Richarlson.

This strength in various lines was confirmed by Brazil's 3-0 victory over Ghana, and 5-1 over Tunisia in the September friendlies.

Interestingly, the most prominent stars that Brazil bet on shortly before the start of the World Cup are currently shining greatly with their clubs, such as Neymar, Vinicius and Richarlison.

While against Tunisia, possession was 65%, 572 passes with 89% accuracy, and 18 shots, including 10 between the woods, and this resulted in five goals.

On the other hand, Argentine coach Scaloni was very happy with the offer made by his first star and playmaker Lionel Messi in the nations of Honduras and Jamaica, where he scored four from Argentina's hexagonal, and appeared at a good physical level, which promises "Tango" supporters a strong participation in the next World Cup.

Great criticism of Germany and England

The general picture for the big European teams is not reassuring. The World Cup holder, France, lost from Denmark 2-0, and narrowly beat Austria 2-0, and the first attacking star, Mbappe, did not present the level expected of him.

While a number of German and England supporters demanded the dismissal of coaches Hansi Flick and Southgate due to the lackluster level of the two teams, and the instability of a fixed lineup, as well as calling up names that do not participate with their clubs, and caused fatal defensive mistakes, such as Maguire with England.

The same is true for Spain, where coach Luis Enrique is betting on Asensio, who has played only a few minutes this season with Real, and Torres, who sits long on the Barcelona bench, and others, and received an unexpected loss from Switzerland 2-1, while winning with an orphan goal against Portugal in end of the match.

On the other hand, a new crisis arose for Ronaldo, this time with his fans in Portugal, who now view him as a "dependent" on the team, and demanded that he leave his place for young names.

Ronaldo did not score any goal in friendlies against the Czech Republic and Spain.