Yesterday, the national football team concluded its 10-day camp in Austria, during which it played two friendly matches against two great Latin teams, Paraguay and lost 1-0, and the second and final match against Venezuela, which they lost 4-0. Venezuela friendly revealed 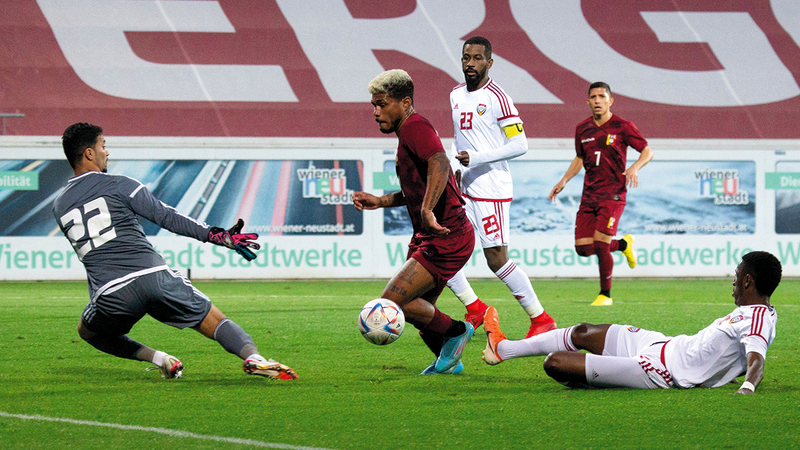 You need an intervention from Arruabarina, the most prominent of which are defensive problems

Yesterday, the national football team concluded its 10-day camp in Austria, during which it played two friendly matches against two great Latin teams, Paraguay and lost 1-0, and the second and final match against Venezuela, which they lost 4-0.

Venezuela's friendly revealed five clear technical gaps, which need the intervention of the coach of "Al-Abyad" Arruabarina in order to address them before the approach of the upcoming benefits, especially the Gulf Cup 25 and the 2023 Asian Cup finals.

Added to all this is the way coach Aruabarina dealt with the match, which was not as required, because by virtue of his great knowledge of Venezuelan football, the team could have come out with minimal losses, despite the great technical differences between the two teams, and the match showed the great impact left by the absence of His international striker Ali Mabkhout, who did not participate in the match, despite his participation in the previous match against Paraguay, during which the national team played one of its most beautiful matches, and seemed a strong match for a big team like Paraguay.

Regardless of the outcome of the match, and despite the big loss, and the team conceding four goals, "Al-Abyad" benefited greatly from this experience, after coach Arruabarina gave 16 players the opportunity to participate, through five substitutions made by the coach in the second half, as such Friendly experiences reveal the positive and negative points to the technical staff in order to remedy them and not to repeat them.

The national team will play two friendlies next November, the strongest of which will be against Argentina on November 13, and the second against Kazakhstan on the 19th.

1- There are many defensive problems and individual errors.

2- Absence of homogeneity and divergence of the team lines.

4- Arruabarina's handling of the Venezuela match was not appropriate.

5- A clear impact on the absence of striker Ali Mabkhout from the match.