Valieva's caution, Trusova's mistakes and Kondratyuk's performance: what do you remember about the first day of open rentals

Kamila Valieva and Alexandra Trusova neatly performed their short programs and did not unnecessarily complicate them. This decision was explained by both injuries. Sofia Samodelkina and Elizaveta Tuktamysheva successfully performed the triple Axel. In pairs, Evgenia Tarasova / Vladimir Morozov delighted the audience with a bright performance. And among men, Mark Kondratyuk was most remembered. What was the first day of open rentals of the Russian national figure skating team - in the RT material. 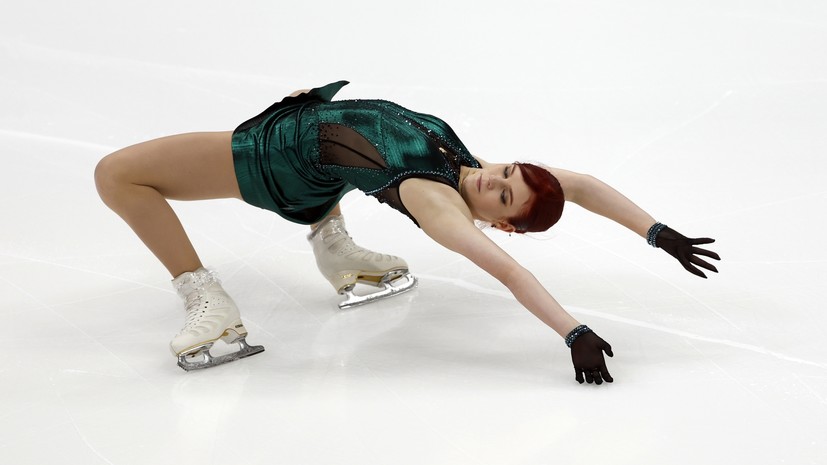 The holiday, of course, was a success: the open skates of the national team skaters were served to the public in the best traditions of the show, and they only benefited from this.

Everything you can imagine was included in the script: an unconventional performance for sports competitions, well-placed stage lighting, and a waterfall of toys from the stands onto the ice in the female part of the event, clearly orchestrated by fan group activists, and even Alina Zagitova along with Maxim Maxaim Trankov as the host, which immediately evoked clear associations with the Ice Age.

But here's the paradox: most of the pair productions, if you do not take into account the technical component, most likely would not have been able to withstand any competition from the TV show.

From a sports point of view, this is probably normal: any competitive program, and a short one to a greater extent, is built primarily in such a way that it is convenient to enter all the technical elements into it.

In addition, the skates, which are held a month before the first major starts (in the old days - the stages of the Grand Prix, now - the Russian Grand Prix), do not imply total readiness.

Accordingly, they sometimes look boring without ultra-c and a perfect fit into the music.

It happened this time as well.

Should it be otherwise?

Probably, yes, after all, since two sports couples (Evgenia Tarasova / Vladimir Morozov and Anastasia Mishina / Alexander Gallyamov), two single skaters (Kamila Valieva and Alexandra Trusova) and Mark Kondratyuk started the season in the status of winners of the Beijing Olympics.

And such significant titles oblige to a little more than the usual rental.

I especially wanted to get vivid impressions from the stars of female ice - Camila and Alexandra.

Russian women's ice has long accustomed fans to the duel format, and if we use similar concepts in relation to the skates in Megasport, the championship definitely remains with Valieva, despite the fact that the skater performed a rather average set of jumps according to current concepts: a double axel, a triple flip and a triple lutz cascade - triple sheepskin coat.

Camila explained the reason for the technical weakening of the program in the mixed zone, citing damage.

“While I have an injury, because of which I can’t fall from quads.

It doesn't bother me, but if I fall badly, it can come back.

I will not rush things when I recover - forward and with a song, ”she explained to reporters.

The new short program of the figure skater, staged by Daniil Gleikhengauz to the music from the film "Interstellar", Camila's most devoted fans managed to dub it brilliant, although in fact it rather evokes a parallel with the programs of the outstanding French dance couple Gabriela Papadakis / Guillaume Sizeron, who over the past years have been reproached for some style uniformity.

Like, no matter what they skate and no matter how they change the music, the “output” turns out to be the same dance, which is repeated from year to year.

"Interstellar" by Valieva, with more than solid and recognizable work by Gleikhengauz the director, really left a feeling of "déjà vu", but the reason for this effect actually lies on the surface.

It consists, in my opinion, in the fact that Camila is not just a figure skater, but an athlete, absolutely fantastically gifted by nature.

No one else has such "singing" hands, such ballet plasticity, such soft and at the same time explosive muscle strength, ease of jumping.

All this produces such a powerful effect on the ice that it leaves no chance for the production to come to the fore, as Yulia Lipnitskaya did with her Olympic Schindler's List in Sochi, or Zagitova with Don Quixote in Pyeongchang.

Camila herself is paramount in any of the programs.

Trusova has a slightly different story.

Mistakes in jumps (the same set as Camila's, but with a blot in the cascade), the skater also explained by injury.

“I must say that I am now in savings mode, I have a back injury.

I hardly skated, but I decided to perform because the fans are waiting for me, ”she said.

Trusova's new production of I Put A Spell On You cannot be called a masterpiece, and this is not only because Sasha is still far from an acceptable physical form.

If there was another skater in her place, one could safely put a note in a notebook: “I didn’t remember.”

It was not easy to get rid of the feeling that the Olympic 2022 vice-champion likes everything that happens around her much more than what she does on the ice herself.

If I were to make a top three for the women's short prize, then in addition to Valieva, I would put Sofya Samodelkina and Lisa Tuktamysheva on the virtual pedestal.

Both were included in the ultra-c program in the form of a triple axel, but if for Lisa this is a habit jump that she loves and does in any condition, then Samodelkina decided to put the axel at the last moment and coped with it, despite the new body, a new coaching staff and a very raw, but rather winning program Can't Help Falling in Love performed by Diana Ankudinova.

After the rental, Sophia admitted that the axel to some extent caused the mistakes that followed - the inner jubilation after a successfully completed difficult jump turned out to be too strong.

The prize for the most memorable and stylish production was definitely worth giving to Kondratyuk.

It is generally accepted that in men's single skating any program is fully perceived only when it is performed without errors, but the jazz production, which Nikita Mikhailov did for Mark, “sat down” on the skater so accurately that, regardless of the jumps, it looked like a self-sufficient work of ice art .

The programs of a number of figure skaters could be put in the same row (surprisingly, in the staging plan, men turned out to be clearly brighter than girls), but Kondratyuk has a very special factor on his side, which, in fact, distinguishes him from all those with whom he competes: Mark in his rentals he is absolutely free internally.

He does not work on the ice, rather he creates, enjoying the process.

It is this inner freedom that makes his skating unique.

Evgenia Tarasova / Vladimir Morozov remembered the same quality, albeit not in such a bright manifestation, in pair skating: having won silver medals at the Olympic Games in Beijing, the athletes seemed to exhale, let go of themselves inwardly and shone with new colors, despite their very advanced age in comparison with those who have to fight.

But this is a completely separate story, to which we will definitely return.