The Russian national football team completed training in Novogorsk and went to Bishkek for a friendly match with the Kyrgyz team. Ivan Lomaev did not fly with the team, since the coaching staff considered it sufficient to have three goalkeepers for one meeting. As the team's mentor Valery Karpin noted, this time he did not load his charges with theory and hopes that the players understood his ideas and will be able to implement them on the field. 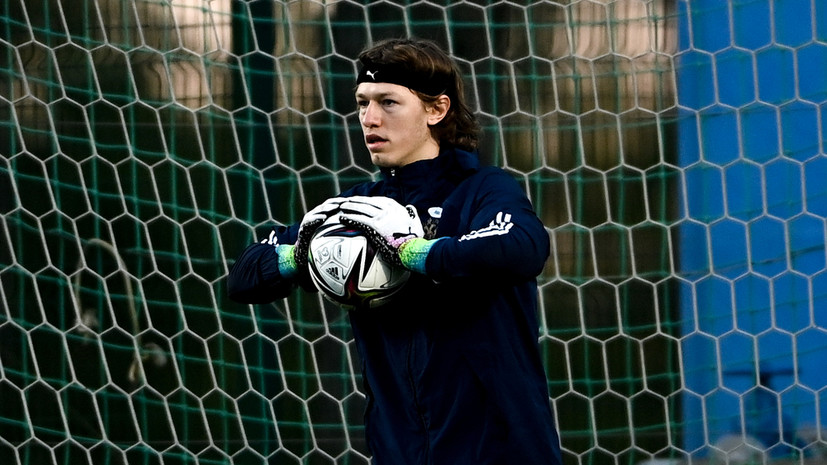 The Russian national football team completed work at the base in Novogorsk and flew to Bishkek on Thursday evening.

There is no goalkeeper Ivan Lomaev in the delegation.

Moreover, judging by the words of a specialist, in Kyrgyzstan, the dream of the goalkeeper of Zenit, who, at the age of 35, has never worn a T-shirt of the Russian national team in an official match, can come true.

“I wanted to meet Misha.

He is not always number one in the club.

If it comes out, then it works reliably.

With his career, he deserved a call to the national team, ”Kafanov said.

As for Lomaev, for the goalkeeper of "Wings of the Soviets" this camp was more of an introductory one.

At the same time, the goalkeeping coach speaks of him very warmly, although he scolds him for his recklessness.

“He is an adventurer, so I wanted to see him personally.

We spent a lot of time at the screens, where we discussed controversial issues with him.

I explained to him what I would like to remove in his game, in which episodes he takes too much risk.

I think he has a great future.

With us, he would not have done it, since this is spoken out in advance.

Lomaev is not afraid to act high, to rush into the fight.

Not everyone does it.

Ivan is a bright goalkeeper.

And his mistakes are memorable, and he saves in such episodes where not everyone can cope, ”Kafanov emphasized.

Under the close attention of the coaching staff are other RPL goalkeepers.

The specialist is especially pleased with the appearance of four young goalkeepers at once.

However, according to him, while they have not grown up to the national team and must gain experience in their clubs.

The coaches trust him, but the football player still makes many mistakes.

Understand, young goalkeepers still have to concede their goals.

Through this they become better.

It's growing, but more needs to be added.

I talked with Guilherme, he helps like a father, ”Kafanov admitted.

It should also be noted the special attitude of the coach to the naturalized Brazilian.

He is not in the team now, but as soon as the Lokomotiv footballer starts to enter the field more often, he will immediately be in the national team.

Even if the first and second number will be someone else.

Guilherme seems to create the very positive work environment that athletes need when preparing for matches.

This is necessary both for the team and for the goalkeeping department.

A wonderful person and a strong goalkeeper.

If we talk about the level of skill, he can play at a high level for a long time.

However, I don’t know how he feels now after the operation, ”added Kafanov.

In addition, listening to a specialist, it becomes clear what qualities a goalkeeper must have in order to get into the national team.

Of course, he must be reliable at the gate and not take unnecessary risks, as Lomaev is doing now.

But there is another important aspect that Kafanov constantly draws attention to: football has changed a lot lately, and the tasks of the goalkeeper have also become different.

He should now be able to handle the ball like a fielder, act as the last defender and start his team's attacks.

According to the expert, this trend has been outlined in Europe for a long time.

Now she has come to Russia - with a slight delay.

The coach sees the greatest potential among domestic goalkeepers in Safonov.

In his opinion, Matvey, with due diligence and desire, can grow to the level of Igor Akinfeev.

It is interesting that the goalkeeper of Krasnodar, when he was told about the words of the mentor, was very surprised.

At the same time, the player emphasized the important role of Kafanov in his growth as a goalkeeper.

“I only hear from you that I am number one in the national team.

First of all, I feel confident and just train... Kafanov is a big man.

He can help with advice not only on the field, but also in life.

There are things that you don’t even think about, but he pays attention to them.

The theory shows the mistakes of each goalkeeper during matches.

It can be seen that he not only works at the club, but also thinks about the national team.

I don't understand where he finds so much time, because it's a huge job.

I am glad that he is training me, ”Safonov told reporters.

As for the whole team, Valery Karpin admitted that he was pleased with how the training went.

And now it remains to be hoped that the players understood the ideas of the coach and will be able to implement them on the field in the match with Kyrgyzstan.

“Everyone is in a good mood, the guys treat the situation the way they should.

The environment is friendly.

Of course, in a couple of days you can’t manage to play something, but you can offer the players an idea and suggest how to implement it.

To work out perfectly, to bring it to automatism, of course not.

We have one lesson devoted to defense, and the second to attack.

Another thing is that the level of athletes allows them to grasp everything on the fly.

And then put it into practice, ”the coach explained.

The team's newcomers, who this time are as many as 12, are also making a good impression so far.

But, as the head coach points out, it is more important to prove yourself in a friendly match.

“I can train too.

But the most important thing is that they will show on Saturday.

Then we will evaluate, ”Karpin emphasized.

At the same time, according to the specialist, this time he did not heavily load the wards with theory and analyze the game of the Kyrgyz team.

The main task is to impose your football on the opponent.

“We don’t want to push off the opponent.

This is our desire and I think it is right now.

There is no pressure because of the result.

Therefore, first of all, you need to hone your actions, ”said Karpin.

At the same time, the mentor stressed that the national team, even in the current situation, should play control matches.

Entering the field in them is the main motivation for football players.

Agree with the coach and the players.

According to Nikolai Komlichenko, he wants to become the best striker in the country.

That's what all professionals think.

No one will relax - everyone wants to get into the national team, to be on the list of the strongest.

This is the motivation, ”said the forward.

Daler Kuzyaev, in turn, noted the importance of holding matches not only for football players, but also for the country.

“We need to show that there is a national team.

She gets ready and trains.

For young guys, this is an experience that will be useful to them in tournaments when we are allowed to play official matches, ”added the midfielder.

A separate topic that was touched upon throughout the collection was Karpin's technique.

In a friendly match, the coach scored two goals against the Medialeague team Our Guys (2:3), and repeatedly scored against Safonov in the classroom.

So journalists even began to worry about the level of current players.

“Valery Georgievich hits very well - his dribble shot into the far corner is hard to take.

He's worked out for him.

Can at any time, without warm-up, in cold weather, approach the ball and hit the target accurately.

It is unlikely that any of the collections will be able to break through nine out of ten times.

This is a Soviet school,” Kafanov said.

At the same time, according to Karpin, it is quite possible to train such a blow, the main thing is to have a great desire.

“Even Lenin said: “You can’t teach, you can learn.”

And it doesn't matter at what age.

I can show you how to hit, but it needs to be practiced all the time, not just a couple of times.

And it is desirable to train not in the Russian national team, but in childhood, ”the specialist added.

The mentor also expressed his opinion about the execution of the penalty, when Safonov jokingly called his kick weak.

“Why do you need a strong one?

To hit the sparrows?

The main thing is to get the ball in the goal, ”Karpin explained.

At the same time, the team coach treats his sports form with irony.

When asked if he would be able to play in the Medialiga, he replied: “I can stand three minutes on the field.”

So for now, in general, everything goes on as usual.

And the coaching staff of the Russian national team is trying to look for positive aspects in the situation.

Earlier, before the matches, according to Kafanov, two or three days were always missing to play some combinations.

Now there is such an opportunity.