Al-Mansoori: The Asian gold is my next ambition... and Mirza is a leader that will not be repeated

The cyclist of the national team, the holder of the first gold medal for the UAE in the history of the Islamic Solidarity Course, Ahmed Al-Mansoori, confirmed his aspiration to win a gold medal in the Asian Championship, and revealed his journey with the cycling game and the suffering he went through until he reached this position, and the role of the national team leader Youssef Mirza in 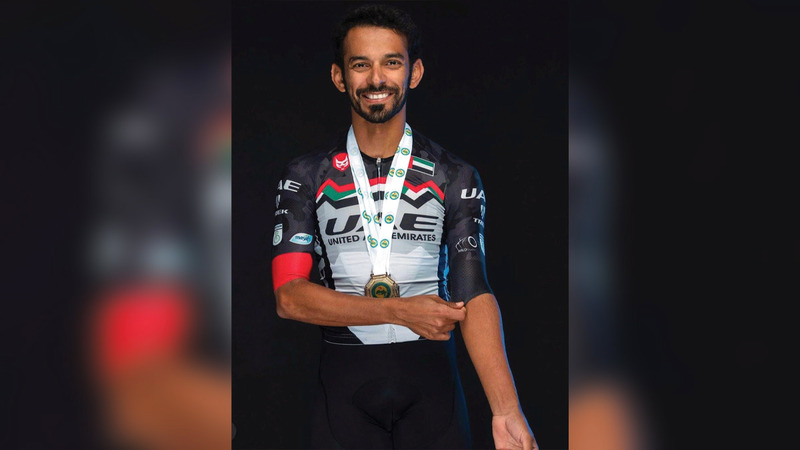 Al-Mansoori: The Asian gold is my next ambition... and Mirza is a leader that will not be repeated

The national team cyclist, the holder of the first gold medal for the UAE in the history of the Islamic Solidarity Course, Ahmed Al-Mansoori, confirmed his aspiration to win a gold medal in the Asian Championship, and revealed his journey with the cycling game and the suffering he went through until he reached this position, and the role of team leader Youssef Mirza in the team’s achievements He pointed out that he would have ended his cycling career because of studying in the 2007-2008 season, had it not been for the support and attention he found from those close to him.

And about his journey with the game of bicycles and the difficulties he constantly faces, Al-Mansoori told «Emirates Today»: "I faced many problems at the beginning of my career in the game, and I almost stopped in the 2007-2008 season, but some of those close to me and Youssef Mirza gave me moral support in order not to stop And my move from Al Arabi Club to Al Nasr Club was a big step in my staying so far in the game.”

He added: “No matter how much I talk, I cannot forget what Yusuf Mirza gave me, whether it was moral, material or technical support and everything.

He really deserves what he has reached now and deserves more. Even before joining the Emirates Pro team, he was interested in the small details that we may not care about, such as sleeping early or the quality of food and focus in training.

There is time for talking and time for training, all of which made Youssef Mirza a legend after a journey of great struggle and suffering since his childhood, and I hope that young players will learn from him.”

Regarding the obstacles he faces, Al-Mansoori said: “The problem is certainly the lack of time to rest and the difficulty of equilibrium between work, college and training, between work in the morning period and after afternoon university, then training at night, and it may end at midnight.

Certainly, university and work were not late for me, but the matter requires great effort and flexibility in the full-time procedures, which is the same problem that caused my brother Muhammad Al-Mansoori to move away.”

Regarding his ambitions in the coming period, he stressed: “I won the gold of the Islamic Solidarity Tournament, but it was a preparation for the Asian Championship. I hope to win the gold in Asia, like Youssef Mirza, in the scratch race, and the gold in ammonium, with Youssef Mirza, which is certainly a right for us after the achievements that have been made in the last period".

He continued, "I bought my bike from my own money, but the constant support and our joy in raising the state flag in various tournaments gave me great motivation, and I am completely satisfied with what I have achieved, and I am proud of the first gold medal in the Islamic Solidarity Course."

On the secret of the cycling team’s brilliance in the recent period, Al-Mansoori said: “The Cycling Federation was keen on our participation in various races, and in the presence of this union headed by Mansour Bouassiba, we achieved unprecedented results and increased our participation, we did not leave any championships now, and this did not happen before, And the results were what we got.”

He continued: “There is another reason for Youssef Mirza, this player who cares about us perhaps more than his brothers, we are an individual game and it is normal for the player to look at himself, but with Youssef the situation is different. And he was not late for any player, and a special message for every young player. Look at Youssef. What he achieved did not come by chance, but rather there was suffering that no player could bear part of.”