Masterpieces of Makarov and Spertsyan, the victory of Akhmat with ten men and a penalty kick twice in Khimki: what did the 8th round of the RPL remember

Krasnodar beat Sochi and moved up to third place in the standings, while Eduard Spertsyan caught up with Quincy Promes in the list of top scorers. Akhmat and Rostov managed to get the better of Lokomotiv and Torpedo on the road, and the former spent about an hour in the minority, while the latter were forced to interrupt penalties twice in stoppage time. Dynamo and CSKA won difficult victories over Ural and Wings of the Soviets, thanks to goals from Igor Diveev and Denis Makarov. What did the eighth round of the RPL remember - in the material RT. 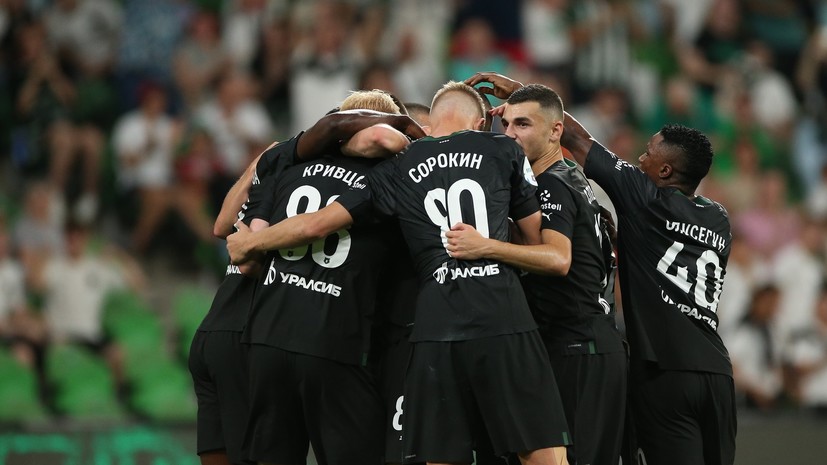 The striker, who had practically never played in the elite division before, scored 19 goals for the modest Ufa and moved to Akhmat in the summer.

In the current draw, Vladimir Sychevoi, who played in the Crimean championship a few years ago, may well repeat his path.

The striker clearly made himself known already in the second round match against Ural, when he scored a hat-trick, coming on as a substitute at half-time.

Then he took a break for more than a month (in fairness, he was not allowed on the field at all in away matches with Rostov and Krasnodar), after which he scored three goals in seven days.

First, he hit the gates of Lokomotiv, then upset Akhmat in the Russian Cup and, finally, helped the team beat Khimki.

Thus, Sychevy has six goals in seven matches in all competitions, and in the race of scorers of the championship he is second only to Quincy Promes, Eduard Spertsyan and Christian Noboa.

Two qualities help Vladimir regularly distinguish himself - the choice of position in someone else's penalty area and high distance speed.

It was in fast breaks that he scored most of his goals, since Orenburg relies on counterattacks.

But the main secret of the striker's success is a chic implementation.

He surpassed an expected goals (xG) of 2.29, more than double, although he never took a penalty.

For example, in the confrontation with Ural, he had to score only once, but scored a hat-trick.

In other meetings, the striker also squeezed the maximum out of his moments.

However, in the course of the season, such indicators tend to smooth out.

The high performance of the players of modest teams testifies to another factor - a decrease in the level of defenders who cannot cope even with not the most formidable attackers.

At the same time, it is not at all a fact that Sychevoi, even if he becomes the best sniper, will join the grand.

This is confirmed by the example of Agalarov, who has not yet become the main one even in Akhmat.

In the spring, Krasnodar suffered the most from the mass departure of legionnaires, but despite this, they finished the season with dignity, taking fourth place.

And in the current southerners, having returned several foreigners, they are fighting for the title.

In the first two rounds, the team scored only one point, breaking the world with the newcomer and devastatingly losing to the grandee.

However, Alexander Storozhuk quickly brought the wards to their senses and in the next six matches they scored five victories with one draw - away from Dynamo.

It is important that the team practically does not allow losses inherent in it before in confrontations with opponents inferior in class and beats equal ones.

In the last round, Krasnodar defeated Sochi in the southern derby.

At the same time, the "bulls" do not change themselves and continue to demonstrate bold attacking football.

Traditional problems in defense and gaps between the lines during counterattacks of opponents have not gone away either, but the incredible play of Matvey Safonov, the leader in the RPL in terms of the number of saves (42), helps to disguise them.

As a result, he even managed to hold three matches in the national championship to zero.

Other performers also stand out.

Eduard Spertsyan becomes the main armor-piercing weapon of the southerners and deservedly leads the scorers race along with Promes with seven goals.

He is second only to the Dutchman in terms of the average number of key passes (2.9).

The young Olakunle Olusegun not only takes second place in the team in the “goal + pass” system (it was his productive actions that helped to get the better of Sochi), but also turns into one of the best dribblers of the championship (3.7 successful attempts per game) .

Finally, Alexander Chernikov does a huge amount of work in the support zone and is in the top 5 of the tournament in terms of the number of interceptions (2.6).

But for Fakel, the season is not easy.

The team, along with Ural and Torpedo, still does not know victories and is fighting for survival.

In the eighth round, Voronezh suffered an away defeat from Paris Nizhny Novgorod.

Perhaps the only feature that the team stands out in addition to the incredible atmosphere at the home stadium is the ability to lose points.

Wards of Oleg Vasilenko opened the scoring in five matches of the RPL, but scored only one in them - in the debut confrontation with Krasnodar.

At the same time, many experts note that football players lose concentration too often.

This leads, among other things, to a violation of the rules in their own penalty area.

This season, Voronezh has already been awarded five penalties, four of which have been converted.

There are questions to the coaching staff.

The team is not enough for the second half, which may indicate not the best functional readiness.

After a break, a rookie in the elite division often falls apart and loses.

It is no coincidence that he conceded 14 goals out of 19, starting from the 46th minute.

The Incredible Return of Shelia

In addition to Pari NN, Akhmat showed willpower in the reporting round.

Grozny managed to beat Lokomotiv on the road, spending more than an hour in the minority.

Moreover, the role of both a hero and an anti-hero in the team was played by Mohamed Konate.

For 28 minutes spent on the field, he managed to open an account, having distinguished himself in the third league match in a row, and earn two yellow cards.

However, even with ten men remaining and conceding the return ball from a rather controversial penalty kick, the guests in the second half acted reliably and selflessly.

The railroad workers, although they had an overwhelming advantage, did not create many dangerous moments.

And when it seemed that the ball should fly into the goal, Giorgi Shelia stood in his way.

The story of the return of an experienced goalkeeper turned out to be amazing.

Even in the round before last, he conceded three goals from CSKA and was replaced at half-time.

After that, the football player came into conflict with Andrey Talalaev and was sent to the double.

But the coach and the ward managed to reach a consensus, and Georgi helped Grozny to score three points in Moscow, making eight saves.

Luck accompanied the team in the other half.

At the 62nd minute, a rare counterattack ended with an amazing goal from the club academy graduate Lecha Sadulaev.

But the red-greens again disappointed their own fans.

After the defeat of Khimki and Orenburg, things seemed to go smoothly for them.

However, following the Muscovites sensationally lost in the Cup of the country "Pari NN", and now lost in the championship.

So far, under the leadership of Josef Zinnbauer, they have won only two victories in nine meetings.

However, the head coach has remained at his post.

But his assistant Marvin Compper, who led the team after the departure of Markus Gisdol, was fired.

Forced victories of Dynamo and CSKA

If Lokomotiv made another misfire, then two other metropolitan giants, CSKA and Dynamo, scored extremely difficult victories over opponents inferior in class.

CSKA gave a fight in Samara "Wings of the Soviets".

Under the pouring rain on the sodden heavy lawn, the hosts held back the favorite for almost 80 minutes.

In some episodes, the team was rescued by Ivan Lomaev, who recorded six saves in his asset, in others, luck turned away from the guests.

Moreover, the judge Artem Lyubimov, after watching VAR, did not see a violation of the rules in the penalty box after the contact of Glenn Bale with Jesus Medina.

However, in the end, the red-blues still crushed the opponent.

A successful draw of the standard position helped them to achieve success.

Igor Diveev converted a corner kick into a goal.

And Dynamo unexpectedly ran into problems in the home confrontation with Ural.

Given the misfires in the meetings with Fakel (3:3) and Pari NN (2:2), another loss of points in a match with a team from the bottom half of the table would become symptomatic.

The first half did not bode well for the fans.

Ekaterinburgers answered the goal of Konstantin Tyukavin with the ball of Eric Bikfalvi.

But the white-and-blues found their own “magic wand” in the face of Denis Makarov.

The midfielder from the zone near the right corner of the penalty area struck a stunning shot into the far nine from his left foot.

However, the most difficult victory was given to Rostov, who snatched three points in the away match with Torpedo only in the 99th minute.

And even then, the controversial decisions of the judge Yan Bobrovsky helped the wards of Valery Karpin to succeed.

Already in the added time to the second half, he risked appointing a penalty for a foul by Oleg Kozhemyakin.

But Yegor Baburin, who had a great meeting, parried a shot from Yegor Golenkov to his right corner.

The referee asked for a kill because the goalkeeper left the goal line ahead of time.

On the second attempt, Baburin again performed a miracle, reflecting a shot from Nikolai Komlichenko right in the center.

But Bobrovsky recorded a similar violation.

And only on the third attempt Maxim Osipenko managed to outplay the goalkeeper.

It is not surprising that the capital club was extremely dissatisfied with the work of the referee, and the team's head coach Nikolai Savichev even said that "I have not seen such lawlessness."

However, the side of Bobrovsky after the final whistle was unexpectedly taken by Baburin, who admitted that he really moved out of the line before the blows.

The southerners, however, can only rejoice at the difficult victory, which allowed them to catch up with Spartak in the standings.

And in the next round the teams will meet each other in Rostov-on-Don.

In the meantime, the yellow-blue, along with Zenit, remain the only teams that do not know defeat in the current RPL season.