Yesterday, the star of the cycling team, Yusuf Mirza, won two gold and silver medals in the Asian Track Cup, which is currently being hosted by Thailand, where he succeeded in winning the silver medal in the elimination race of the championship, then followed that by winning a gold medal in the points race, to raise the UAE tally to MEDA 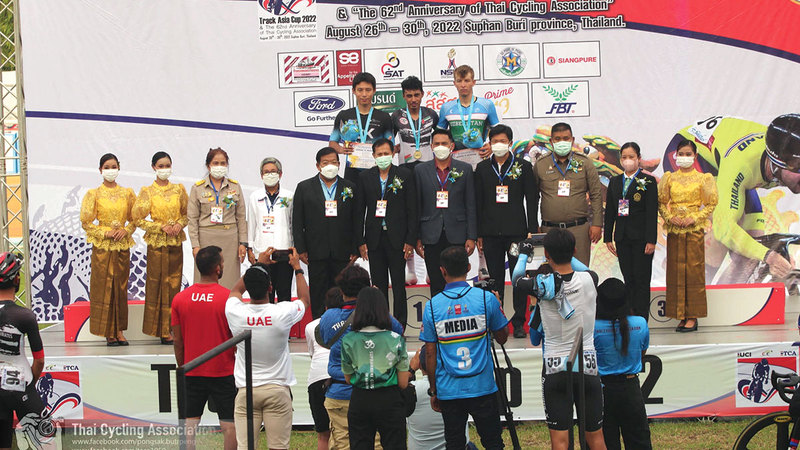 The team concludes its participation in the Thailand Games tomorrow

Yusuf Mirza during the coronation yesterday in the Asian Championship.

Yesterday, the star of the cycling team, Yusuf Mirza, won two gold and silver medals in the Asian Track Cup, which is currently being hosted by Thailand. The largest Asian championship on the continent.

Youssef Mirza was able to compensate for the fall he suffered on the first day of the tournament, as he lost the opportunity to win a medal he was close to, to return to the podium yesterday, during the third day, through the wide door with gold and silver.

Mirza won the elimination and points races in the specialty, after he had previously demonstrated his abilities in these races.

Mirza continued his recent series of successes, after winning the gold medal in the same race in the Islamic Solidarity Tournament, which was hosted by Turkey during the first half of this month.

The team will finish its participation in the tournament tomorrow, and there is still an opportunity for the team’s champions to win new medals.

It is noteworthy that the UAE is the only Arab country to participate in the continental event.

After the race, the champion Youssef Mirza confirmed in a press statement his happiness with the Asian achievement, explaining that this would not have happened without the concerted efforts and assistance of all members and players of the team in the race that witnessed the participation of Ahmed Al-Mansoori.

He said that the UAE national team is moving steadily to achieve all aspirations and raise the UAE flag in various international forums.

Youssef Mirza appreciated the great support provided to the national team by the Football Association headed by Mansour Bouassiba, head of the National Teams Committee, saying that this contributed to many achievements during the current year.

On the other hand, Mansour Bouassiba was keen to communicate with the team in Thailand, and congratulated Youssef Mirza for the achievement achieved in the tournament so far, noting that this was a natural result of what the cycling team had done, after a good preparation for all tournaments.

Bouaseba said: “We have always been keen in the board of directors to make our first goal is the national teams and their preparation since we took over the task of the board of directors of the federation, and indeed we started from the second year to reap the achievements from the Salalah Tour to the Arab Championship in Egypt, the Asian Championship, the Arab Cup for Track, and the Solidarity Championship And all of them are championships that witnessed achievements and medals in a historic year that has not been achieved before in cycling.”

He added: "Youssef Mirza did not succeed alone in achieving achievements, but rather it is the work battalion of our national team, with the presence of Abdullah Sweidan, the coach, Ahmed Mayouf, the bicycle technician, and the stars of the adult team led by Youssef and the presence of the heroes Ahmed Al-Mansoori, Saif Mayouf, Khaled Al-Kaabi, Jaber Al-Mansoori, Muhammad Al-Mansoori, Walid Al-Naqbi, and all the players who raised the state flag in various tournaments.”

Mansour Bouassiba continued: “Everyone is working on the heart of one man in the Cycling Federation, and it is natural that this is the actual result of what has been achieved this year. I thank everyone who contributed to this achievement, especially the General Sports Authority and the National Olympic Committee, for their continued support of the Federation until We got where we are.”

• 4 of the cycling stars represent the national team in the continental championship, and they are: Youssef Mirza, Ahmed Al-Mansoori, Khaled Mayouf and Saif Al-Kaabi.