Old guard: six players who made their debut for the Russian national team after 30 years

Over the years of the existence of the Russian national team, many football players defended its colors. But if most of them debuted at a relatively early age, then some got a chance to prove themselves after 30 years. The last such player was defender Sergei Terekhov, who entered the field in the qualifying matches for the 2022 World Cup in Qatar. Who else received a debut call to the national team in their forties - in the RT material. 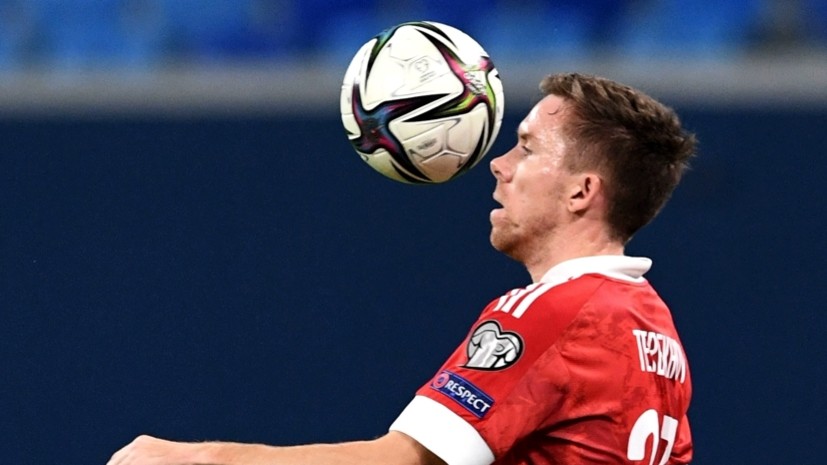 The Brazilian goalkeeper of Lokomotiv became the first naturalized football player in history to play for the Russian national team in an official match.

In March 2016, he replaced Stanislav Krytsyuk in a friendly match against Lithuania and kept a clean sheet.

Although initially Marinato Guilherme was not going to play for a once foreign country.

A year earlier, he admitted to the Brazilian media that he does not see himself in another national team, and receives a passport solely to bypass the limit on foreign players.

In subsequent years, he regularly came to the location of the national team.

At first, he conceded the fight for post No. 1 to Igor Akinfeev, but over time he got a chance to prove himself.

Guilherme looked great in the Nations League, where he never conceded in two matches, after which he entered the field in all meetings of the Euro 2020 qualification.

And, most likely, he would have taken a place at the gate in the final part of the championship, if not for the ill-fated game with Serbia.

Marinato missed five times in half and was replaced by Soslan Dzhanaev, and Stanislav Cherchesov criticized the goalkeeper at a press conference: “I never helped out.

That's why they changed it."

One unsuccessful game cost Guilherme to get to the championship of the continent.

He lost the confidence of the coaching staff and missed the start of the 2022 World Cup qualification, and then the control meetings before the Euro and the tournament itself.

And this is taking into account the fact that in the spring he was in excellent shape and became one of the creators of Lokomotiv's breakthrough from eighth to third place in the RPL table.

The coaching staff explained the non-call with the intention to give the athlete time to conduct “introspection and reassessment”, but the process dragged on.

Under Cherchesov, the goalkeeper never got into the application again, and returned to the clip only after the arrival of Valery Karpin.

At a slightly more mature age, Guilherme's colleague played the first match for the national team.

Sergei Ryzhikov has always been considered one of the most reliable Russian goalkeepers, but could not compete with the younger and more stellar Igor Akinfeev, Vyacheslav Malafeev and Vladimir Gabulov.

And this despite the fact that in 2008-2009 he twice helped Rubin win RPL gold, and he himself was the leader in the percentage of “dry” matches.

“Ryzhikov is not knocking on the doors of the national team: he has already knocked them off the hinges, and now he is completely breaking through the window!

Not to notice such a goalkeeper is absurd, ”said the ex-defender of Spartak Evgeny Lovchev.

Apparently, the lack of confidence in the two-time champion of Russia was also amazed in neighboring states.

In January 2011, there were rumors about interest in him from the Kazakhstan Football Federation, but the goalkeeper himself said that he dreams of playing for the Russian team.

Coincidence or not, but it was after this that he was finally given the opportunity to put on the uniform of the national team.

Ryzhikov went to the base in a friendly match with Qatar, but already in the fourth minute he made a mistake and was forced to pull the ball out of the net.

Submission from the flank went exactly behind the back of the goalkeeper, he stepped back, but did not reach the ball and allowed Mohammed Kasol to forward it into an empty net.

During the break, Sergei lost to Malafeev instead and subsequently never again entered the field for the national team.

In October 2021, Sergey Terekhov got into the main squad of the Russian national team for the game with Slovakia.

At the same time, unlike the same Ryzhikov, he could not boast of either the gold medals of the national championship or the victory over Barcelona in the Champions League.

The defender spent the first half of his career inexpressively, wandering around the clubs of the Baltika and Volgar level.

Everything changed when the football player, in transit through Dynamo, which was vegetating at that time in the FNL, ended up in Orenburg, and then in Sochi.

Cooperation with Vladimir Fedotov helped him achieve significant progress and become first a major player in one of the leaders of the RPL, and then a candidate for the national team.

At the same time, it cannot be denied that the appearance of Terekhov in the national team was forced and was provoked by a lack of performers in the left-back position.

At that moment, 38-year-old Yuri Zhirkov was without a club, Ilya Samoshnikov and Vyacheslav Karavaev were injured, and Fedor Kudryashov had not practiced playing on the defensive flank for a long time.

Sergei was one of Karpin's last hopes in the key meeting of the 2022 World Cup qualification with Slovakia and did not lose face.

In total, he spent 80 minutes on the field before giving way to the Antalyaspor defender.

Subsequently, he took part in the defeat of Cyprus and could well have helped his partners in the play-off with Poland, if not for the removal of Russia.

Relatively late, the former goalkeeper of Spartak also received a chance to demonstrate his skills in the national team.

Although in the case of Artyom Rebrov, it cannot be said that his challenge seemed a matter of course.

Until 2014, he served as an understudy for Andriy Dikan at the club, and after the departure of the Ukrainian, he was not always super reliable.

Nevertheless, already in September he began to be regularly involved in training camps, and in November 2015 he entered the field.

And immediately in the match with Croatia, even if it had the status of a friendly.

However, the debut turned out to be even more disastrous than that of Ryzhikov.

Rebrov also spent one half, but conceded three goals.

And although Artyom was hardly to blame for at least one of them, he was never involved in the team again.

Perhaps he himself is partly responsible for this.

In one of the interviews, he openly stated that he did not want to "come and sit in reserve."

I start from them, ”Cherchesov noted.

Despite the fact that by the time Ari was called out, two naturalized Brazilians were already playing for Russia, this event caused a huge resonance.

The invitation of an age-old forward by football standards was criticized by Andrei Talalaev, Anatoly Byshovets and Alexander Mostovoy, and Roman Pavlyuchenko publicly refused to watch matches with his participation.

Apparently, he could not forgive him for his behavior in the final of the Russian Cup in 2017.

Then the Lokomotiv striker participated in a mass brawl and delivered several blows to the Ural players, receiving a red card for this.

Even his flattering remarks about the country and the statement that being called up to the national team was “the dream of his life” did not help Ari to change public opinion.

Cherchesov did not listen to his colleagues and in November 2018 invited the player to the location of the team.

True, he did not stay there long.

The forward twice came on as a substitute, but failed to score goals, and the team lost both times with a total score of 0:5.

At first, they could not oppose anything to Germany in the test meeting, and then they lost to Sweden in the League of Nations.

Subsequently, Ari repeatedly expressed hope for a return, but injuries intervened, due to which he missed a total of 367 days over the past three years.

It cost him a place not only in the national team, but also in Krasnodar.

Another Rubin player had to wait the longest time for his chance.

For the first time he appeared in the application for the match of the Russian national team in October 2009, and entered the field in the game of the national team after almost six years.

In September 2015, Oleg Kuzmin replaced the injured Zhirkov and became the oldest debutant of the national team in the 21st century.

“What can I say - unexpectedly ... We flew from Macedonia today at seven in the morning, and I just opened my eyes ... To be honest, I thought that at the age of 34 they were no longer called up to the national team.

It's nice, ”Kuzmin admitted to the Championship.

Unlike most colleagues, the defender immediately proved that the trust was not in vain.

First, he successfully replaced Zhirkov in the Euro 2016 qualifying meeting with Sweden, and then spent a total of 153 minutes in confrontations with Moldova and Montenegro.

Moreover, he also scored against the Balkan team.

Igor Denisov performed the most accurate throw into the penalty area, and Kuzmin sent the ball into the net in a volley fall.

Oleg was the first Rubin player to score for the national team, and the RFU included his goal in the list of the best that year.

Against the backdrop of such performances, Kuzmin's entry into the application for the European Championship seemed to be a settled matter.

At that time, Mario Fernandez had not yet received a Russian passport, and the main competitors in the right-back position were Roman Shishkin and Vladislav Ignatiev.

But problems with the knee joint prevented the age-old defender from fulfilling his dream.

He hoped to the last that the pain would pass, but at the end of May he realized that he could not do without an operation.

And he did not hide it from the coaching staff, but personally called Slutsky.

It makes no sense to go to the European Championship on one leg.

It is necessary to refuse, ”Kuzmin told Sport-Express.

As a result, the recovery dragged on for more than six months, after which the 35-year-old Kuzmin was no longer considered as a candidate for the country's first team.

Finally, the chances of a return evaporated in July 2017.

Fernandez, who received citizenship, was first invited to the training camp, and later became one of the leaders of the team.