"Before I was not prepared. It's like that, it wasn't. He trained very well, maybe he was in good shape, but when he competed he always screwed up. I didn't know how to control my nerves.... 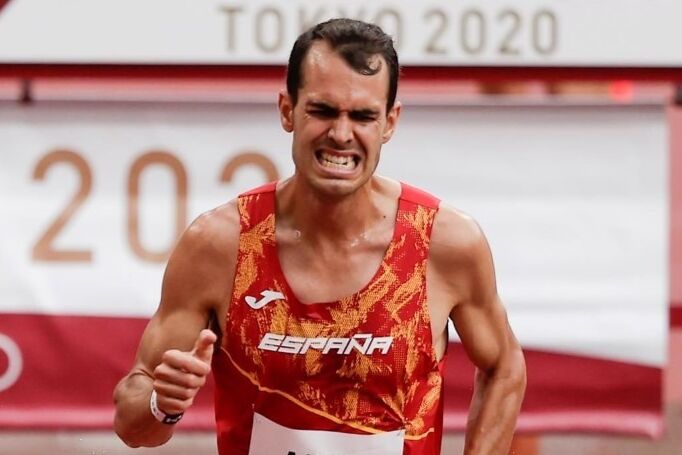 "Before I wasn't prepared. It's like that, I wasn't. I trained very well, maybe I was in good shape, but when I competed I always screwed up. I didn't know how to control my nerves. I remember that in the 2017 Spanish Championship, in Barcelona, ​​I arrived With a minimum for the London World Cup, I had to get into the top three and I sank, I finished last. Maybe if I had worked with a professional then, things would have turned out better for me earlier. But I didn't and I needed more time to get there." , recognizes

, sincere, about his strange progression.

He was in a junior European as a teenager and then did not debut with the national team until recently, in 2018, when he was already 26 years old.

Since then he has not missed an appointment, but this season is really his: at the age of 30 he was ninth in the 3,000 obstacles at the Eugene World Championship -the first European- and this Friday at the Munich European Championship (9:00 p.m., Teledeporte) He is one of the favorites for the medal.

Along with him, two other Spaniards,

, an army of Italians and other candidates such as the French

He is a late athlete, although his biography is marked by another fact: his mother

From Burgos, being in his twenties, he moved to León to train in the group of coach José Enrique Villacorta, including Martos himself, but as soon as he learned of the ailment he returned to the family home.

"And I'm still there, I live with my mother, I want to be close to her to help in any way I can. I feel very comfortable. I don't know if I take care of her or she takes care of me," explains Arce, who in the last weeks he has trained with his whole family nearby.

Returning from the World Cup in Eugene, the obstacle courser found that none of his teammates were on the slopes of the University of Burgos, that they had all gone on vacation and so that he would not be alone, the tartan was filled with uncles, cousins... even his mother accompanied him in a wheelchair.

"It was a huge motivation shot. I'm very familiar. In fact, my sister has come to Munich for my final and that pushes me a lot. My mother has not been able to come because it is very difficult for her to travel, we have to mobilize the whole family , but I will keep it very much in mind," says Arce, who values ​​his time doubly thanks to that close bond with his family.

Last Christmas, for example, he spent concentrating on the Sierra Nevada High Performance Center (CAR) and in Kenya: a distance that was pain, a distance that is now an incentive.

"It is very difficult for me not to be with my family, but it also gives me strength: now I know that before the European Championship I did everything I could to arrive prepared," the hurdler explained in a telephone conversation with EL MUNDO.

The London Games, from the park

A child footballer like so many, like almost everyone, he was a central defender for Burgos until he opted for athletics, for obstacles, a specialty that fit perfectly with his height, 1.90 meters.

For years he stagnated just one step behind the elite, behind the explosion of compatriots like

, but now his time has come.

Such a fan of the Games that in 2012 he traveled to London to see if he could get tickets and ended up watching the finals on his mobile sitting on a bench in Hyde Park, his Olympic debut in Tokyo was a gift.

This Friday he wants more.

It is no longer enough to be: you have to get on the podium.

"The truth is that I feel very good, I feel great, this is my moment or so I feel. Anything can happen, of course, I can finish last, but I see myself winning, I'm not afraid of anyone. This European is a dream that I have had for a long time", concludes Arce who, changed, full of confidence, mature at 30 years old, concludes: "I feel this final is the culmination of my career. It is a golden opportunity and I have to take advantage of it. If not I do it, nobody knows what will happen tomorrow. It is already, it is now".