Juan Ayuso, the boy who surpasses Pogacar in precocity and who feels more pride than pressure

He answers the journalist's phone call from his home in Andorra while he prepares his suitcase to travel to Utrecht, where the Vuelta a España starts on Friday. Juan... 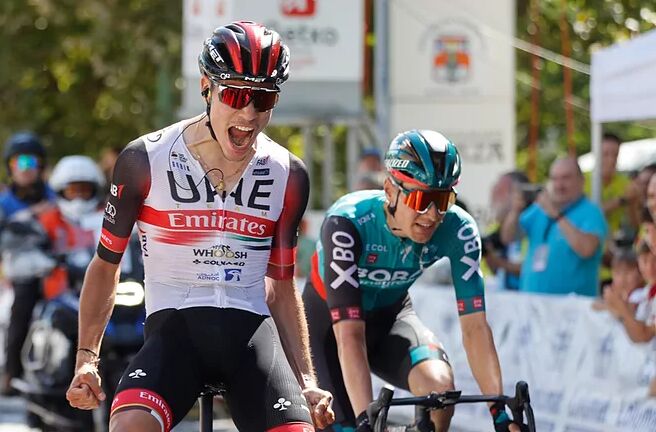 He answers the journalist's phone call from his home in Andorra while he prepares his suitcase to travel to Utrecht, where the Vuelta a España starts on Friday.

says that he is delighted with his debut in the round, but that he cannot give more details because it is due to the discipline of the UAE press officer, who refers to the presentation of the squad in that city of the Netherlands .

“More than pressure, I feel motivated.

I like that people are aware of me, therefore it is a pride more than a pressure.

I am glad that they expect me to achieve great things, “said the 19-year-old boy in the Dutch city.

The new jewel of Spanish cycling is already taking center stage due to its precocity in entering the elite.

“The great champions are unstoppable.

Talent cannot stop”, they say from the surroundings of the corridor.

The technicians of the Emirates formation have accelerated the

growth strategy of the prodigious boy

At the beginning of the course, they decided that in 2022 he would not play any of the three big rounds, but the excellent results of this campaign have precipitated events.

Ayuso, born in Barcelona in 2002, but raised in Jávea, amazed on July 31 at the Getxo Circuit, where he won his first victory as a professional.

) in a reduced sprint thanks to his power in ramp finishes.

A versatile guy in climbing and time trials.

He is very good and they know that in the UAE, that's why, just six days after winning in Getxo, they

renewed his contract until 2028

Nobody in that group has signed such an extensive agreement.

He goes to the Vuelta without pressure, as

's assistant and with the freedom to chase stages, like

«Of course I will work for Almeida.

We are a team and this is my first Vuelta, I come to learn and get the best of myself.

My approach is to go day by day.

I want to finish with a good taste in my mouth », he clarified on Wednesday.

With his debut he surpasses Pogacar

, a teammate and leader in the Arab team, who debuted in the Spanish round in 2019 with just turned 20 years old.

The precocity record is held by the Spanish

Ayuso and Pogacar share a privileged physique, as explained by

, UAE coach, in an interview on Eurosport: «I have worked with Juan Ayuso and I think he has everything to be a world figure.

He has impressive physiological parameters, like those of Pogacar, complete cyclist qualities.

He has great determination and

You talk to him and it's as if you were talking to a professional with years of experience.

He could almost schedule training sessions for professional cyclists himself.

San Millán pointed out that one of the keys to Ayuso's amazing progression is his passion for cycling: «I talk to him every day.

If you tell him to do four hours, he does four hours and a minute in case he has stopped at a traffic light.

He is the most professional thing I have ever seen, but you

have to stop him because he doesn't want to stop

According to the stress tests carried out by the UAE specialists, Ayuso moves 6.2 watts/kg, the same power generated by Pogacar.

From his beginnings, the Spaniard stood out for his

and for his interest in the application of the latest technologies in improving the sport.

Since cadet he used potentiometer.

In youth he already had a coach and a nutritionist.