Miguel Ángel López, the gold that was born from failure: "They told me: 'Leave it, it's finished'"

"Don't remind me, I'm crying again. Look, I've been in this for years, look, I've trained walkers and never one had hugged me in the middle of the race", acknowledges José... 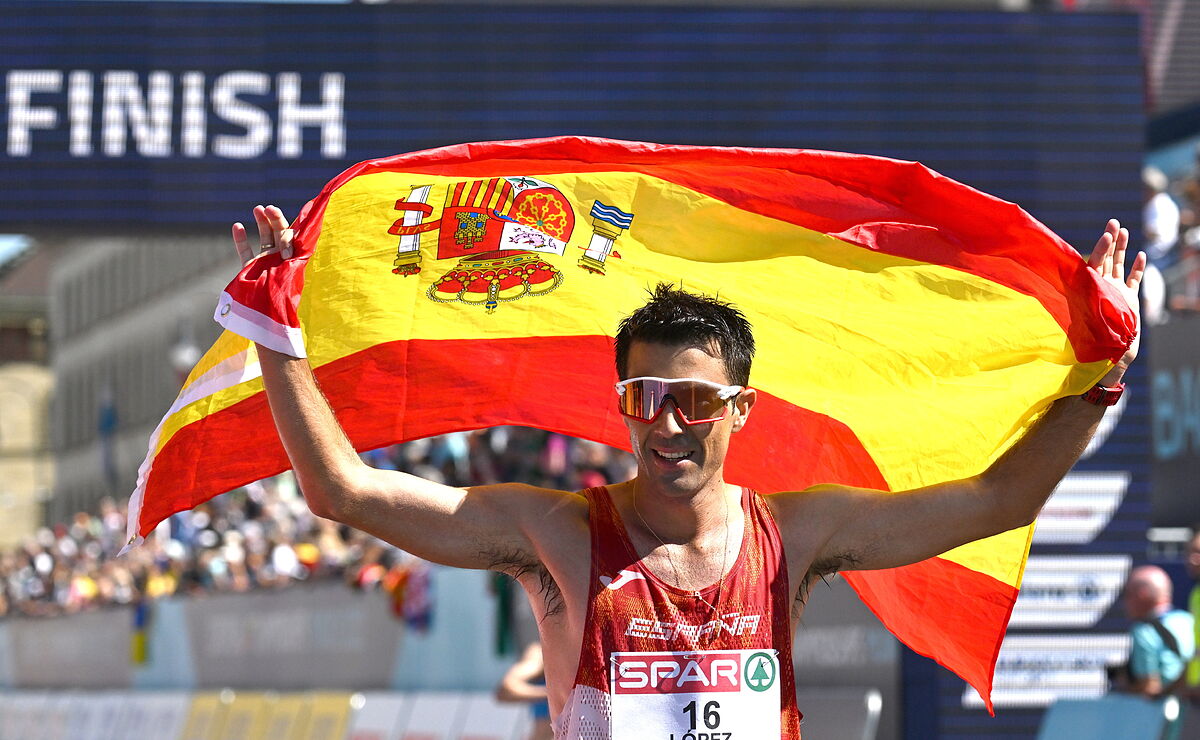 "Don't remind me that I'm crying again. Look, I've been at this for years, look, I've trained walkers and one had never hugged me in the middle of the race," José Antonio Carrillo acknowledges to EL MUNDO about one of the most emotional moments there was and there will be in the European in Munich.

Despite being in the middle of his career, he needed to thank his coach for trusting him when hardly anyone else did.

"Even Miguel himself doubted himself. I have had to be on top of him, support him, support him and support him. I have always said that he is the best in the world and that he would prove it again. But all this time there were people, many people, who told me: 'Carrillo, leave it, Miguel is finished'", says the coach who also directs Álvaro Martín, the main Spanish asset for the 20 kilometers on Saturday.

The story of Miguel Ángel López actually began with a failure.

Exaggerated talent, perhaps the greatest that Spain has had, in his beginnings as a professional, being in his twenties, he won everything that could be won and launched himself for the challenge of all time: hanging two medals in some Games, in his case, those of Rio 2016. In athletics perhaps there has never been a clearer Olympic success.

His gold in the 20 kilometers was a fact and in the 50 kilometers he won a medal, that's for sure.

"Before the 20 kilometers a judge came to tell me to watch out because the catwalk to the podium was wet, the photographers told me where I had to stand for the celebration... At the start I saw Miguel with a disfigured face and I already knew that something was not going well," recalls Carrillo and, indeed, something, everything, did not go well.

The pressure distressed López, stopped him, destroyed him and he could not even be a finalist;

days later, in the 50 kilometres, he even retired.

It was a defeat so painful that it haunted him for several years.

His confidence was nil.

He was in the lead and in the first attack of the rivals, at 14 or 15 kilometers, he let himself go.

At last year's Tokyo Games he even pulled the plug early on to finish thirty-first.

Fortunately, the solution was underway.

Before the Olympic disaster in Japan, the psychologist Juan Torres, from the San Antonio Catholic University of Murcia (UCAM), had already started working with him.

"He had to learn to suffer, to fight. When he started out, with his gift, everything came out relatively easy for him. But when things got more difficult, he had to do that learning," Torres analyzes in conversation with this newspaper about a process that began with a very specific step: he needed to get away from athletics.

The bad results were affecting him in his personal life and he required some time, some distance.

"Because of his willpower. Even after Tokyo he came back a few days later wanting to train. I wouldn't have been able to," says Flores, who agrees with the coach, Carrillo, on that.

"In his situation, perhaps someone else would have left him, but Miguel has a lot of willpower. This medal is thanks to that," proclaims Carrillo, who yesterday during the test did not suffer as much as usual.

Miguel Ángel López's gold was indisputable, as were his gold medals a decade ago.

At the dawn of the test, at kilometer 5, he left the peloton and his opponents did not see him until the finish line.

, double bronze in the recent World Cup in Eugene, was the only one who tried to follow him, but he ended up fainting.

The only thing left behind was for the German

to fight for the podium with pity for Bermúdez, who finished fourth.

It was the only downside for Carrillo, also his coach.

Although before a hug, the hug of Miguel Ángel López, the resurrected champion, had already made him the happiest man in the world.