"Nunez' headbutt" cost Liverpool dearly .. a loss of two points and an absence of 3 matches

Liverpool coach Jurgen Klopp considered that the new Uruguayan striker Darwin Nunez failed his colleagues, but he will learn from the incident of his expulsion against Crystal Palace the day before yesterday. 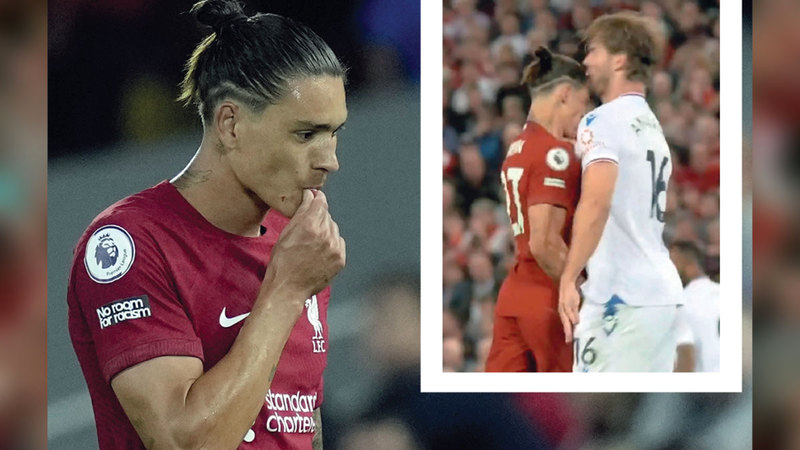 Jurgen Klopp criticizes him and says he let his teammates down

"Nunez' headbutt" cost Liverpool dearly .. a loss of two points and an absence of 3 matches

Nunez will not participate in the upcoming match against Man United on the 22nd of this month.

Liverpool coach Jurgen Klopp considered that the new Uruguayan striker Darwin Nunez had failed his colleagues, but he would learn from his expulsion against Crystal Palace the day before yesterday.

Nunez was playing his first Premier League match in the ranks of Liverpool, who moved to him from Benfica, and his first at Anfield, but he lived a disastrous evening after the referee sent him off in the 58th minute for head-butting Danish Crystal Palace defender Joachim Andersen, to complete the last half hour with 10 players and save him Colombian striker Luis Dias from the loss by drawing 1-1, but the team lost two important points, especially after the draw in the previous round against Fulham, and the player will miss at least three matches due to the direct expulsion resulting from an assault.

Nunez became the second Liverpool player to be sent off while playing his first match at Anfield after Joe Cole against Arsenal in 2010.

Klopp commented on the expulsion, saying in a press statement: "Darwin knows that he has let his colleagues down.

Of course, the incident deserved a red card, he was provoked, but he shouldn't have responded that way."

"It's not a reaction we want to see," he added.

He should know that he will face physical battles of this kind because the central defense does this.”

Nunez will miss three matches for his team, most notably the following against arch-rivals Manchester United next Monday at Old Trafford, in addition to the confrontations with Newcastle and Bournemouth, but Klopp considered that Nunez will benefit from his suspension "by doing physical training not to punish him but to make him more ready."

Nunez was previously sent off once in his career in his first season with Spanish club Almeria in 2019.

On the other hand, former Liverpool defender Jamie Carragher, who works as a commentator for Sky Sports, expressed his fear that Nunez will wait several weeks to get a second chance.

If he had stayed on the pitch, I'm sure Liverpool would have come out victorious."

Liverpool had also fallen into a 2-2 draw in its opening match against the newly returned second-tier Fulham, only two points from two games, while last season's champions City won the full mark by beating West Ham 2-0 and Bournemouth 4-0.