“I won’t let anyone yell nasty things at me”: how Medvedev argued with a fan after leaving the Masters in Montreal

Daniil Medvedev, after leaving the Masters in Montreal, came into conflict with a fan who called him a "loser". The Russian could not restrain himself, approached the offender and advised him to "turn on his brains." A little later, the tennis player admitted that the young man could not really explain his behavior, because he did not speak English well, but insults also rained down from his father. In this situation, the domestic athlete was supported by his rival Nick Kyrgios, who called the fan's act disgusting. 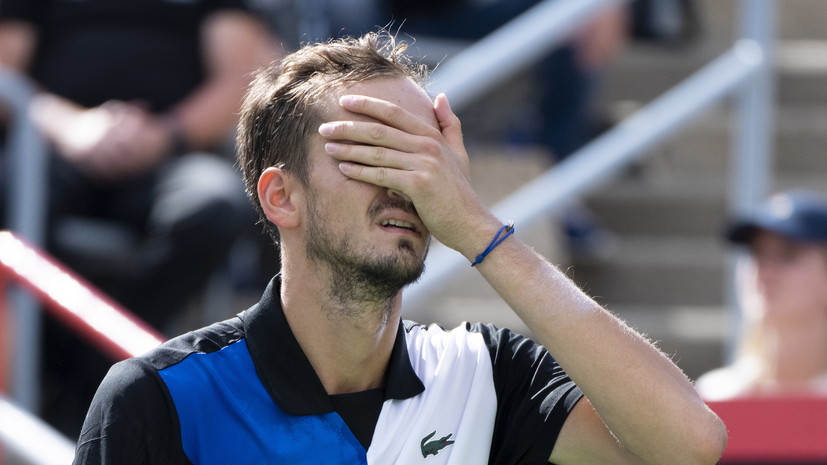 The North American series of hard tournaments led by the US Open began rather ambiguously for Daniil Medvedev.

Returning to service after the forced pass of Wimbledon, the Russian immediately won in Los Cabos.

However, one should not overestimate the importance of success in Mexico, because in addition to the native of Moscow, from the tennis players included in the top 10 of the world ranking, only the ninth number Felix Auger-Aliassime showed up for the competition.

It is not surprising that the favorite easily broke the resistance of Rinka Hidzikata, Richardas Berankis, Miomir Kecmanovic and Cameron Norrie, who were inferior in the class.

A misfire in Montreal turned out to be much more revealing, where Medvedev lost to Nick Kyrgios in the first match in three sets.

At the end of the confrontation, the tennis player came into conflict with one of the fans.

The incident occurred when the athlete was already leaving the arena.

At the exit, a crowd of fans was waiting for him.

One of them shouted "loser" at his back.

A domestic athlete does not always cope with emotions even after victories, not to mention defeats.

He did not restrain himself in this situation.

Hearing a call to him from a young man, he abruptly turned around and headed towards him.

There was an impression that the first racket of the planet could even hit the offender, but he managed with the advice to “turn on the brains”.

After talking calmly with the man for about a minute, Medvedev, accompanied by stewards, went further to the applause of those present.

A day later, after a short rest and recovering from the offensive departure, Medvedev explained what exactly happened at that moment.

According to him, he tried to find out the motives of his behavior from the screamer, but it was difficult to do this, because he could hardly speak English.

“People asked him to apologize.

But it does not matter.

I will not let anyone shout nasty things at me, I will not remain silent and will not pass by.

The thing that bothered me the most was his father.

When I approached his son, he also began to say nasty things to me.

When I have children, I will raise them differently.

Raise a child, and don’t tell me nasty things, ”said the tennis player in an interview with L’Equipe.

At the same time, he admitted that he had not previously encountered such a thing in real life, but exclusively on social networks.

According to the athlete, it is understandable that such situations arise with the growth of popularity.

Kiryos also supported the opponent, who called the fan's act disgusting and stressed that fans are obliged to treat the first racket of the planet with respect, no matter what game he shows.

By the way, Medvedev himself, after losing to the Frenchman, did not complain about the behavior of the audience, as he did, for example, during the Australian Open final with Rafael Nadal.

According to him, those present behaved quite decently and were divided approximately equally in their preferences, and after success in the first set at the tie-break they even applauded him in unison.

However, if the incident with the fan is unlikely to unbalance the Russian two weeks before the US Open, where he will defend the title, and will remain in history as an unfortunate misunderstanding, then a failure in the confrontation with Kiryos can undermine his self-confidence.

Moreover, the starting party did not portend problems to the Muscovite.

The opponents confidently took their serve, and the set naturally ended in a tie-break, where the Frenchman could not cope with his nerves and lost.

It seemed that the first racket of the planet should easily bring things to victory.

But in the future, his game completely went wrong.

He immediately allowed the opponent to make a break and return.

By and large, the domestic athlete did not cope with the powerful first serve of Kiryos, allowing him to win 82% of the points on it and taking only 26% at the reception.

Unpleasantly surprised by the large number of blots.

Medvedev made 24 unforced errors against Nick's 17.

There were especially many of them in the decisive game, when Daniil actually gave his opponent his own serve twice.

At the same time, the Russian himself did not make a single break.

So Medvedev for the first time since March 2021 completed his performance in the tournament on hard after the starting meeting.

In addition to the early departure, he faced another problem.

Now the Muscovite is seriously at risk on the eve of the US Open to concede leadership in the ATP rankings to Rafael Nadal, who has returned to action.

This will happen if the Spaniard wins the Masters in Cincinnati, and the Russian covers the racket before the quarterfinals.

However, experts do not see tragedy in his defeat in Montreal.

So, the president of the Russian Tennis Federation (FTR), Shamil Tarpishchev, complained that the Muscovite was unlucky with the draw: he immediately got a strong opponent, with whom the chances of winning the confrontation were approximately equal.

Therefore, the loss to Kiryos should be taken calmly and not to draw far-reaching conclusions from it.

Honored coach of Russia Viktor Yanchuk agreed with Tarpishchev and stressed that the athlete has two more weeks to adequately prepare for the main event - the US Open, and this time should be enough for him.

“Over the remaining days, he will get in shape just in time to reach the main American tournament at its peak.

After this match, you just need to draw some conclusions, improve your game somewhere and move on.

If Medvedev is the first number, this does not mean that he must win all the matches in a row, because there is competition, and it is very serious, ”the Championship quotes the specialist.

Davis Cup finalist Andrey Chesnokov also noted that Medvedev lacked a bit of luck, and at the moment he should rest and continue to work on the eve of the Masters in Cincinnati and the US Open.

“There is nothing wrong with defeat, Medvedev will play another tournament, there, most likely, a more comfortable opponent will come across.

There is still time to prepare for the US Open, ”TASS quoted Chesnokov as saying.

However, the tennis player himself took the failure calmly.

Moreover, according to the Russian, he played with dignity against Kiryos, although he failed.

And most importantly, Daniil assured: before two important competitions, he is completely confident in himself.

“Of course, I want to try to win as many games as possible here, to strengthen the winning spirit in the run-up to the US Open.

But we will consider each separately.

The draw, according to my feelings, is very, very tight.

Sometimes it happens that someone retires, or is tired from the season, or is not in the best shape.

Here, I look at the tournament grid and think: “Wow ... here every game - even in the first round - is an ordeal,” the ATP official website quotes the athlete.

In Cincinnati, before the quarterfinals, he can only meet with one tennis player from the top ten - Andrei Rublev.

In the first match, he is able to pass the 24th racket of the planet Botik van de Zandshulp.

However, in addition to his compatriot, Denis Shapovalov, Grigor Dimitrov, Fabio Fognini, and even the offender Kiryos were in the same part of the grid with him.

Therefore, breaking into the top eight and maintaining leadership in the ranking will not be so easy.