Alexis Sanchez, Chile's "wonderful child" on the relaunch with OM

Olympique de Marseille announced on Wednesday the signing of striker Alexis Sanchez. At 33, the Chilean probably has his best years behind him but can still offer OM a glimpse of… 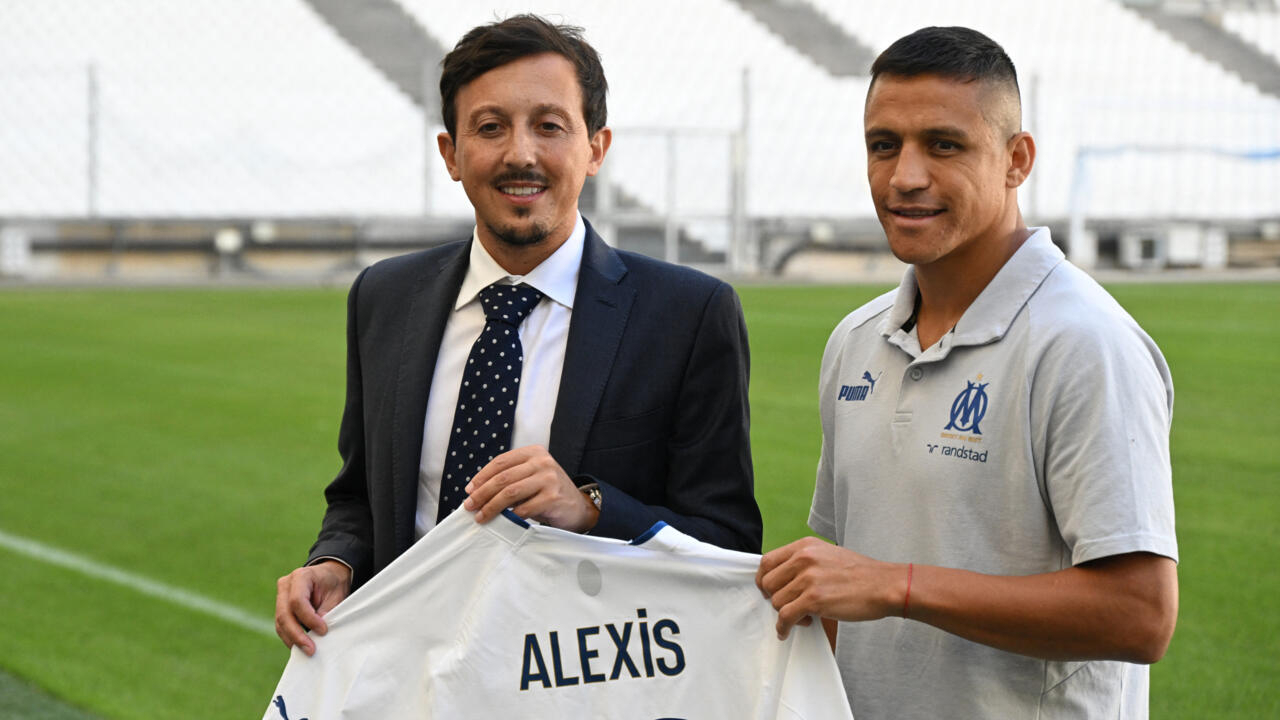 From the rutted grounds of Tocopilla to the Old Port of Marseille, via the Emirates Stadium of Arsenal and the podium of the Estadio Nacional in Santiago de Chile: at 33, Alexis Sanchez has already known everything in football.

But struggling for a few years, he has not given up on lifting trophies and challenging himself in football, as evidenced by his signing for OM on Wednesday August 10.

"I hope to be able to give them all that on the pitch," explained Alexis Sanchez during a press briefing during which he was officially presented.

"I always try to fight for titles, it's a personal challenge to win a title here, it was the same at Inter, they hadn't won for 11 years."

Free of any contract, the Chilean international striker with 143 caps who won 17 trophies in his career signed up after the success of his medical examination.

An Inter Milan that he has just left free by terminating his contract.

He revived there after several complicated years at Manchester United, with an Italian championship, a Cup and a Supercup won.

Admittedly, he was not in the foreground, helmed by the pair Lautaro – Lukaku, but his statistics of 9 goals and 4 assists in 38 matches made him the best luxury substitute last year in Serie A.

From poverty to Europe

At 33, the Chilean is no longer quite the same player, this "Nino Maravilla" who enchanted European football in the first half of the 2010s. A "child prodigy" whose story resembles a football fairy tale.

Little Alexis was born and raised in Tocopilla, in northern Chile, a "city of hell" with massive poverty.

"In Tocopilla, the vast majority of the inhabitants are poor and illiterate. Before Alexis Sanchez made his fortune in football, it was our only social class. Now we have two: the poor and Alexis Sanchez", summarizes Cristian Calmonte, a local social worker, in a SoFoot report published in 2014.

The penultimate of a family where each child has a different father, Sanchez was abandoned by his father shortly after birth and raised by his uncle.

The future Chilean star survives by selling buckets of water in cemeteries and washing cars.

Football offers him a way out.

After being rejected by the big Chilean clubs in detection, he started at the age of 16 in the Cobreola club, in Calama, located in the Atacama desert.

Under this dodger, at 2,300 meters above sea level, it catches the eye of Udinese.

Each time, he gives satisfaction and wins titles.

The player ended up shining in Italy during his three seasons at Udinese.

He finishes the last halo of the title of best player in Serie A, with 12 goals and 10 assists in 31 games.

Courted by all the greats of Europe, Alexis Sanchez chose FC Barcelona - "the best club in the world", according to his statements at the time.

Under the aegis of Pep Guardiola, he played his first Champions League campaign which ended in the semi-finals, thus becoming the first Chilean player to reach this stage of the competition.

He spent three seasons there and scored 39 goals in 88 games, supporting Lionel Messi on the attacking front.

He then left to discover the Premier League at Arsenal, the real peak of his sporting career.

He scored 80 times in four seasons.

Alongside his club career, the striker wears the "Roja", the Chilean selection.

With his friend Gary Medel, he is the most capped player in the history of the selection with 148 caps.

And it's far from over.

Along with the defender and Arturo Vidal, Alexis Sanchez embodies Chile's golden generation that broke the country's glass ceiling.

Indeed, the three men have played in the biggest European clubs.

Their selection, under the leadership of Marcelo Bielsa and Jorge Sampaoli – two of the coaches who have had the most impact on OM recently – embodied a force that counts in South America in the 2010s. Qualified for the 2010 World Cup and 2014, the Chileans won a trophy for the first time in 2015 against Messi's Argentina at the Copa America, at home in the Estadio Nacional de Santiago.

Then a second against the same opponents, the following year during the Copa America of the centenary.

After this historic double, however, the time has come to decline.

Chile fails to qualify for the World Cup in Russia, then for the one in Qatar.

The forfeiture coincides with that of Alexis Sanchez.

In the winter of 2018, Alexis Sanchez left Arsenal to join Manchester United, becoming the highest paid player in the Premier League (440,000 euros per week).

But recruiting is a total flop.

Until his exit door at Inter Milan.

Alexis Sanchez, at home at OM?

By recruiting the Chilean, Marseille president Pablo Longoria can be satisfied – the club which has been chasing a "great striker" for years without ever really achieving its goals.

Alexis Sanchez has everything to fulfill this role, despite his 1 meter 68.

"Scorer, passer, fast, agile and able to play in all positions in the offensive sector, also very present in the pressing and in the 'one-on-one', the Chilean international is a world-class player", s' is congratulated the Marseille club.

The arrival of Sanchez should allow OM to have "a leap in level" and to "change dimension" to be more competitive, estimated in front of the press Pablo Longoria.

He does not rule out "continuing the adventure" with the player beyond the year of the contract offered to him if he holds "the competitive level that everyone wants".

The fans, for their part, are already conquered.

Witness the rockstar welcome offered to Alexis Sanchez upon his arrival at the airport: a warm, very South American atmosphere.

Something to make the Chilean feel at home.