The line for Valieva's autograph, Zagitova's skating in pairs and Kostornaya's operation: what is being discussed in the world of figure skating

Kamila Valieva finished performing in the Scarlet Flower show and returned to Moscow, where she trained at the Moscow Urban Forum congress. A huge queue gathered for the autograph session of the figure skater, and not everyone was able to get the coveted signature. Alina Zagitova almost flew into a lantern during an ice performance, and also visited a hockey match, where she made a starting throw-in. Evgeni Plushenko was injured during a meeting of the Football Media League, and Alyona Kostornaya will undergo surgery due to an old hip injury. What is discussed in the world of figure skating - in the material RT. 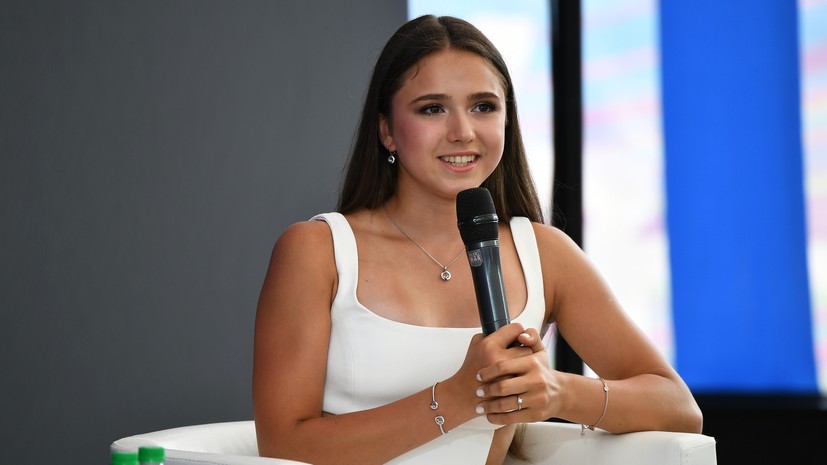 Kamila Valieva completed her performance in the show "The Scarlet Flower" in Sochi and went to Moscow to prepare for the test skates, which will take place in September.

In total, the skater took part in 18 performances.

According to her confession, it was difficult for her to learn the pair elements, but the interaction with other skaters on the ice, which is not in single skating, turned out to be interesting and exciting.

The Olympic champion believes that the new experience will help her in sports.

“At the moment, it was extremely important for me to see, understand, feel that my skating is necessary and interesting for many people.

And the realization that they are waiting for and loving me will warm me for a very long time and, I hope, help and support in the coming season, ”Valiyeva said in an interview with AiF.

She admitted that she was looking forward to the competition.

According to Camila, it's a shame that it won't be possible to compete in international tournaments this year, but the main rivals, the strongest and titled ones, are still in Russia.

“And sport is about competition between the best and the best.

Therefore, the new season will no doubt be interesting, and the fight will be exciting, ”the 16-year-old athlete emphasized.

And how popular and interesting Valiev's viewers could be seen on Sunday at the Moscow Urban Forum.

In the capital's Manezh, Kamila held exercises for everyone, which attracted hundreds of people.

Then an autograph session took place, for which a huge queue gathered, stretching for several tens of meters.

Despite the fact that the athlete spent more than an hour doing this lesson, not everyone was able to wait for the coveted signature and photo with their favorite skater.

Emotions and memories of Zagitova

Meanwhile, in the "Scarlet Flower" Valieva was replaced by Alina Zagitova.

She will also perform with Dmitry Solovyov, as Kamila previously did.

In the first show, the athletes performed several difficult lifts.

The Olympic champion admitted that before the debut they had only a few trainings in Moscow, but she is still not afraid to skate in pairs, since Dmitry helps her in everything.

“He is a super partner.

If I do something wrong, Dmitry sometimes tells me in support, twists me like a professional, ”Sport24 quotes Zagitova.

The athlete also said that she was glad to return to the show and experience "unreal emotions" again.

The figure skater delighted the audience with branded spins, as well as a clean double axel.

However, according to Alina, for the first time, not everything turned out as planned, and she herself was very nervous before going on the ice.

In addition, the dimensions of the site made their own adjustments to the rental.

“You can roll on a large one, which significantly saves energy.

And here it is necessary to stay within the framework of a compact arena.

Today there were a couple of moments when I almost flew into some kind of lantern.

It’s good that this didn’t happen ... On ice of this size, everything needs to be controlled.

But this is also a good experience, ”the figure skater emphasized.

Nevertheless, the audience was delighted with the performance of the Olympic champion and filled her with flowers and gifts.

Taking the opportunity, Zagitova also attended the match of the Sochi Hockey Open tournament between Sochi and Avangard and even performed the starting face-off.

She admitted that thanks to this she experienced a real surge of adrenaline.

In addition to the game, the skater visited the studio to shoot a program for the competition's YouTube channel.

There she spoke about her love for hockey and the Ak Bars team, and admitted that she was not very good at fighting, "like any girl."

“But it’s spectacular, it looks.

So this is one of the key moments in hockey, its integral part, ”said the world champion.

She also remembered how upset she was because of the defeat of the Russian team in the final of the 2022 Olympic Games.

“Indeed, I was very emotional at the Olympics.

This is probably the first time I've cried.

I was really sorry for our guys, but such is the sport.

They did not lose, but took second place.

For me, this is so, ”said Zagitova.

Evgeni Plushenko made his debut for the BrokeBoys team in the Football Media League.

He spent two friendly matches, and in one of them he was injured.

“The groin twitched a little.

I have had several surgeries.

Everything will be okay.

I want to play and train.

The team is good, the guys are interesting.

The main thing is to put yourself in order.

I don’t want to offend anyone, hockey and figure skating are complex sports.

But football, by intensity, is a hell of a sport.

Great respect for all the players, ”Sport-Express quotes the two-time Olympic champion.

He also shared his impressions of the culture of behavior on the field in media football, which, according to him, is characterized by conflicts and provocations.

Yes, but I wouldn't.

I don't attack anyone in my life.

I have always had a position in sports that the opponent must be respected and defeated by deed: in figure skating - by jumping, and here you need to take the upper hand not with mud, but with the game, ”said Plushenko.

Eugene also recalled that among his friends there are several outstanding football players, including the world champion in the Italian national team Alessandro Del Piero.

“We were talking just the other day.

He sent me photos.

There is also Sasha Kerzhakov, with whom we are also friends and communicate, Sasha Mostovoy, also my close friend, our legendary player, ”Plushenko shared.

Alena Kostornaya said that in the coming days she will have an operation due to a long-standing hip injury.

Therefore, the athlete will miss the test skates, which are scheduled for the end of September.

“In CSKA, I trained regularly, but I didn’t skate - I didn’t go out on the ice almost from the arrival from the training camp in Novogorsk.

There was an old hip injury, which for a long time did not make itself felt, but at one point it “shot” so much that she went for an examination, ”TASS quotes the figure skater.

Despite this, the ex-European champion expects to perform in the upcoming season.

New programs have already been staged, and, according to Alena, they are “very beautiful, interesting.”

“These are familiar stories, I have never heard such music from anyone.

I hope that everything will turn out well, ”Kostornaya noted.

The figure skater was supported by colleagues in the workshop, who expressed confidence that she would be able to successfully recover from the operation and return to the ice.

So, Alexei Yagudin recalled the stories of Tatyana Totmianina and Elena Berezhnaya, who continued their careers after serious injuries, Evgeni Plushenko, who underwent many operations.

The Salt Lake City Olympic champion himself was once forced to undergo a hip replacement surgery.

“The realities of big sport are such that a rare traveler following this path comes to the finish line with an empty bag of injuries.

I think, first of all, you should not sympathize, but cheer up Alena.

A person who wants to win and works hard for it will always achieve his goals, ”said Yagudin.

Tatyana Tarasova, in turn, said that this injury had been tormenting Kostornaya for a long time, and surgical intervention was necessary to save her career.

“She is not in an acute period now, but it is very difficult and it is impossible to skate without surgery.

A week of good training - the leg "flies".

Of course, you need to do an operation, because the doctors insist, ”the coach emphasized.

Last month, she visited Eteri Tutberidze's group, and last week she visited Plushenko's Angels, where she watched the work of Sofya Muravyova, Veronika Zhilina, Alexander Plushenko and other athletes of the academy.

For younger mentors, the attention of the illustrious coach is always pleasant, and her advice is accepted with gratitude and admiration.

So, Plushenko himself published a joint photo with Tarasova on social networks and stated that her attention was priceless.

“Tatyana Anatolyevna, thank you for your magic.

I am very touched.

I am always waiting for you, ”wrote the two-time Olympic champion.

His wife Yana Rudkovskaya called the morning of the visit "legendary sports" and noted that all the participants were extremely satisfied.

And her eye is definitely a diamond!

— wrote Rudkovskaya in the social network.

Tarasova, in turn, noticed that she liked Evgeny's approach to work, although she admitted that so far he was losing in comparison with the more experienced Tutberidze.

“I would like such outstanding athletes to go into coaching.

I am very, very glad to see Zhenya in this role.

I wish him only success, he has wonderful children who can skate with success, ”Match TV specialist quotes.

Now the eminent mentor plans to visit the training of Alexander Zhulin's wards.

It seemed that Stanislav Konstantinov, who ended her career, also switched to coaching.

However, the figure skater herself denied this information and stated that so far she had only taken a break from competitive activities.

At the same time, she really does gliding, spinning with children and dreams of someday recruiting her own group of athletes and bringing them from zero to the highest level.

“We work mainly with children from the regions.

They come to the training camp and absorb every word, they want, they burn - it's amazing.

I myself ride with them, I show everything myself, I even jump slowly.

I had an injury, I didn't skate for a long time.

The first time she went out on the ice and said: “My good kids, don’t judge me if I suddenly fall off the cog.

I haven’t skated for a long time, ”said the athlete in an interview with Sport24.

She also admitted that she worked with a psychologist, because in recent years in sports she was very dissatisfied with herself.

“I began to take care of myself - to start with, feed, put to bed on time, do not scold, do not engage in self-digging excessively, do not cheat.

I let go of anxiety about money, about the future, about sports, and so began to see myself beautiful in some ordinary moments!

I like it, it’s beautiful for me - I won’t go and wrap myself up, hide, ”the figure skater shared.

According to Stanislava, having abandoned debilitating diets, she recovered greatly - immediately by ten kilograms.

It was a difficult period, as it was difficult for her to accept herself.

“Then, at some point, I just forced myself to let go and never come back to it again.

After that, she began to post candid pictures on social networks, but not in order to attract someone's attention, but simply because she herself likes it.

“I always have a very positive attitude to this - not only on my part, but also on the part of everyone,” Stanislava concluded.