His Highness Sheikh Ahmed bin Mohammed bin Rashid Al Maktoum, President of the National Olympic Committee, stressed “the importance of leaving positive imprints in all sports forums in which the flag rises and rises in front of various countries of the world, thanks to the determination of the people of the country and their will that does not know the impossible, and their sincere affiliation.” 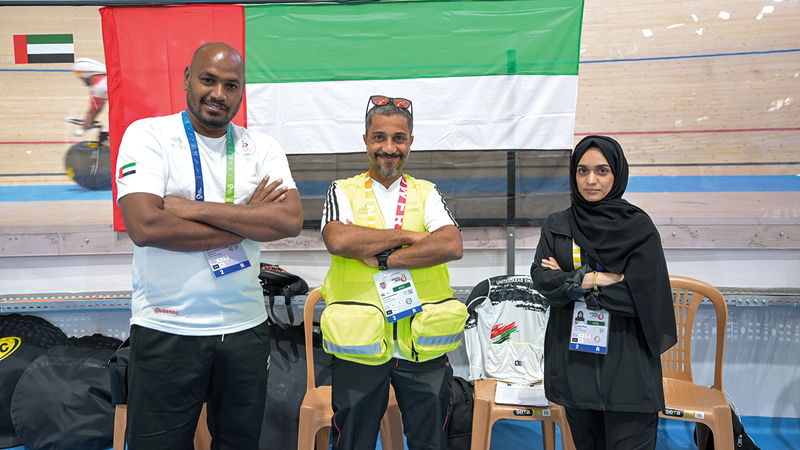 His Highness Sheikh Ahmed bin Mohammed bin Rashid Al Maktoum, President of the National Olympic Committee, “stressed the importance of leaving positive imprints in all sports forums in which the flag rises and rises in front of various countries of the world, thanks to the determination of the people of the country and their will that does not know the impossible, and their loyal affiliation that they derive From a rational leadership that struck the most wonderful examples of giving and giving, for the sake of the name of the Emirates, its prestigious position and its good reputation.”

His Highness pointed out that “participation in sports forums is a practical translation of the continuous efforts and endeavors of the sports federations in the journey of representing the country, in addition to being the main criterion by which we stand at the levels of our athletes when they meet their fellow athletes from all participating countries, as many benefits are evident during these benefits. Among the technical aspects in which performance is evaluated, reports are prepared and plans are drawn up to enhance the march of UAE sport.”

His Highness valued the honorable results achieved by the sports delegation participating in the Islamic Solidarity Games in Konya so far in the games competitions that were held before the official launch of the session through the UAE national cycling team, calling on all participating athletes to continue their efforts and achieve more medals that enhance the UAE’s position in the table General arrangement of the course.

His Highness added that "the people of the Emirates are always on time, especially in major sporting events and forums that require determination and sincerity, to highlight the bright side and honorable success in each participation, which represents the epitome of hard work and several achievements written by successive generations that carried the flag and raised the flag high on the podiums." His Highness pointed out that "the moment of achievement remains immortal in the conscience of every athlete after his success in performing his lofty mission, and representing his country well."

His Highness noted the importance of implementing all practices on the part of the sports delegation participating in the tournament, which are in line with the "Fifty Principles", specifically the sixth principle, which states that "the consolidation of the global reputation of the UAE is a national mission for all institutions."

From this point of view, the National Olympic Committee is keen with all sports federations in every right to achieve this vision in a way that contributes to achieving the desired goals and objectives.

The men’s cycling team finished the Scratch race, the first of the aluminum races in the 10 km track competitions at the Fifth Islamic Solidarity Games in Konya, Turkey, where Ahmed Al-Mansoori came third in the race, which was held at Konya Track, which witnessed the participation of 19 cyclists, while cyclist Yusuf Mirza came in the center Fifth.

The duo of the national team also participated in the speed race within the aluminum races for a distance of 10 km, and Ahmed Al-Mansoori came in second place with 76 points, while Youssef Mirza ranked third with 68 points.

Sheikha Issa came in 14th place in the women's scratch race in the 7.5 km aluminum track competition, and she also achieved the same position in the 7.5 km sprint with 28 points.

The nine games in which the UAE participates in the tournament include: archery, bow and arrow, bow and arrow for people of determination, karate, judo, taekwondo, fencing, weightlifting, swimming, and cycling.

■ The Taekwondo team enters the atmosphere of the competition today, with the participation of Ali Mohamed, Meshary Mohamed, and Fatima Issa.

■ The UAE will participate in nine games within the tournament, which officially opens today, and will continue until the 18th of this month, with the participation of 6000 athletes from 56 countries.

53 athletes representing the UAE in the tournament

Today, the activities of the Islamic Solidarity Games, hosted by the Turkish city of Konya, will officially open today, with the participation of 6000 athletes from 56 countries competing in 24 sports, through 483 competitions, and the UAE will participate in it with 53 athletes competing in nine different individual sports, and its activities will be held on 13 A site attended by 2,000 volunteers, the opening ceremony will be held at 8:00 pm Konya time 9:00 pm Emirates time at the Konya Metropolitan Stadium, which has a capacity of 42,000 spectators, and hosts the opening and closing ceremonies and the final match of football competitions.

The Vice-Chairman of the Medical Committee, Dr. Abdullah Al-Rahoumi, stressed the importance of following up the health status of all athletes, ensuring the safety of their treatment plan, supervising the medications they use, if any, and making sure that they do not contain any doping substances.

Al Rahoumi explained that "the medical staff, which includes therapist Sheikha Al Shamsi, and therapist Iappan Manikavasagam, follow a clear treatment plan and rehabilitation program for athletes, during competitions and training, to ensure their readiness during competitions," noting that the medical committee of the participating teams attends the medical meetings of the Islamic Solidarity Games, To ensure that precautionary measures are taken to prevent infection with the “Covid-19” virus and other various health problems and sports injuries.