“It’s stupid to accuse him of betrayal”: why Russia did not support criticism of Daniil Medvedev because of life in France

State Duma deputy Roman Teryushkov, after Daniil Medvedev's victory at the tournament in Los Cabos, said that the athlete should be called "a French tennis player of Russian origin." He also suggested that Medvedev had the citizenship of this country. In response, FTR President Shamil Tarpishchev advised the official not to mind his own business, and Olympic champion Yevgeny Kafelnikov called for proof of the player's obtaining a second citizenship. In turn, the honored coach Viktor Yanchuk recalled that Maria Sharapova constantly lived in the United States, but this did not stop her from defending the honor of her Motherland, and according to Svetlana Zhurova, talented domestic tennis players have no choice but to go abroad. 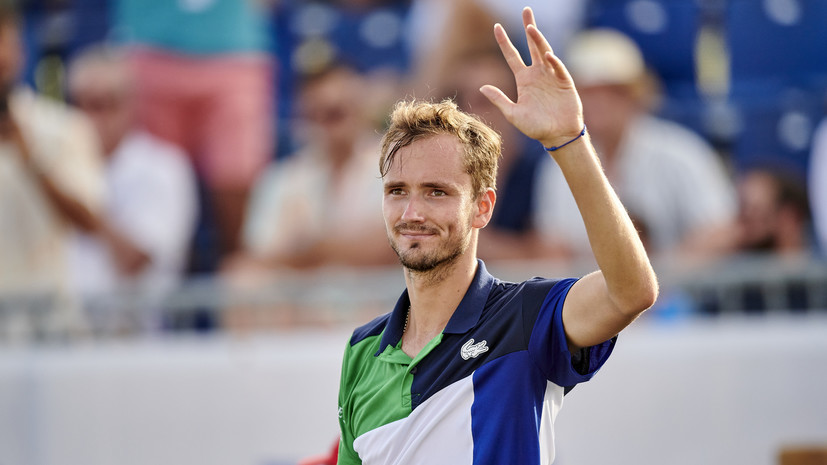 The topic of the place of residence of the leading domestic tennis players often became an occasion for discussion.

So, Maria Sharapova, when she was still on the court, was periodically criticized for the fact that she is constantly in the United States and even speaks English with her personal trainer.

Similar claims are now being made against Daniil Medvedev.

The corresponding reproach to the first racket of the planet was expressed by State Duma deputy Roman Teryushkov.

Although he congratulated the athlete on winning the tournament in Los Cabos, he said that it was not entirely correct to call him a Russian player.

“If he lives in France and probably has the citizenship of a country officially defined by Moscow as unfriendly, then it would probably be more correct to write “a French tennis player of Russian origin,” the deputy noted in his Telegram channel.

Also, in his opinion, Medvedev ceased to be of interest to most of the country's population after he agreed to play under the flag of the International Tennis Federation (ITF).

The attack of the deputy was not ignored by the head of the Russian Tennis Federation (FTR) Shamil Tarpishchev.

The functionary responded harshly to Teryushkov and advised him not to mind his own business.

He recalled that the strongest players regularly travel around the world - this is an absolutely normal and generally accepted practice.

“Medvedev studied in Moscow under the guidance of Ekaterina Kryuchkova.

Yes, his sister works in Paris, he lived there, and that's fine.

At different times, our guys trained all over Europe: in Germany, Spain, France.

Because it makes it easier to move.

Athletes perform 36 weeks a year, live in the hardest schedule, constantly on the road.

From the point of view of logistics, it is easier, and now even more so.

We have been in tennis all our lives, and if someone knows how to build a system better, let him say.

We are not idiots after all.

And I have no doubt that all our athletes are patriots of their country, ”R-Sport quotes Tarpischev.

A little later, Teryushkov specified his claims to the player.

He once again lamented how he easily renounced the national tricolor and now represents on the court rather than Russia, but himself.

As an example, the deputy cited swimmer Yevgeny Rylov and gymnast Yevgeny Kulyak, who refused to take this step, despite the sanctions.

“I am very glad that Daniel knows how to play tennis well, that he is the first racket of the world, as a person he can be proud of himself.

But we are talking about patriotic education.

The athlete first of all personifies the country, and it is unacceptable to change the flag of your state.

I think 90% of the population of our country will agree with me, ”he said on the air of Match TV.

It is worth noting that Daniel lived in Moscow until 2014 and graduated from high school here and entered the university.

He combined his studies with regular training.

Moving to France was largely a forced step.

For his sake, the athlete's parents even had to sell the apartment.

“We are always trying to find the best teachers in everything.

And when they already plunged into tennis, began to go to tournaments, including the Grand Slam under 18, the idea ripened that they had to leave somewhere.

It is desirable to Europe, so that there is a big city, an airport, a good climate, ”Olga Medvedeva recalled in an interview with Sport-Express.

The family considered Finland, Sweden and Canada as options, but for various reasons these countries did not fit.

The choice in favor of France was explained by the fact that the elder sister of the tennis player Elena, after graduating from Moscow State University, in 2010 entered the master's program at the University of Nice.

At the same time, the parents met coach Gilles Servara, who is still working with the first racket of the planet.

As a result, after a long wait, the Medvedevs received a visa that allowed them to stay in the country for a long time.

“While they were preparing and learning the language, they sold their Moscow apartment, buying it in a house under construction in France.

They specially chose a cheap one, with a convenient exit to the highway.

They thought - if they do not give a visa, at least let it be cheap.

We will hand over, ”the parents recalled.

However, Medvedev, according to them, never settled down in a new place and did not even try to make friends.

Yes, and Daniel himself admitted that he was in the country only for the sake of a career.

“I miss everything in France.

People have a completely different mentality.

I don't feel at home there.

But when I return to Russia, I feel comfortable.

Most of all I like the good weather there.

If we take the conveniences of life, everything is more developed and made for people.

But at the same time, I can say that I live there only because of tennis, ”he said in an interview with VTB.

Speaking of Teryushkov’s claims against the first racket of the world that he agreed to play under the ITF flag, the athlete from the very beginning expressed dissatisfaction with this measure, but stressed that he was forced to do so in order to continue performing.

“Our task is to develop tennis in our countries and around the world, and for this you need to play.

At the moment, the only way to continue is to perform under the flag of the organization, and I will follow this rule ... I am waiting for the moment when I can return the flag, ”R-Sport quotes Medvedev.

He did not speak out on the topic of changing sports citizenship by Russians, while Andrei Rublev and Daria Kasatkina considered this step acceptable.

"All the top players live and train in different countries"

In the world of tennis, the deputy's attacks on Medvedev were criticized.

So, Olympic champion Yevgeny Kafelnikov suggested that the official present evidence, relevant documents, if he considers Daniel to be the owner of French citizenship.

“And so his words can be called nothing more than an empty shaking of the air.

All leading players live and train in different countries.

This is absolutely normal practice.

Therefore, such claims from Teryushkov are complete nonsense.

It’s just stupid to accuse Daniil of some kind of betrayal, ”Kafelnikov emphasized in a comment to RT.

The honored coach of Russia Viktor Yanchuk took his side, who recalled that Sharapova had lived in the United States throughout her career, but this did not prevent her from winning victories under the flag of Russia and glorifying the country in the world.

“I see no reason to criticize Medvedev either.

Another thing is if he made some controversial political statements or criticized the actions of the country's authorities.

I don't remember Daniel commenting on the topic of politics at least once, and I don't think he will.

A person lives by tennis - that's enough for him.

He stands for our country and brings her points.

Moreover, Medvedev moved to France a long time ago, when relations between the countries were completely different.

And all the deputies were silent.

Do not artificially build a wall.

You need to encourage your athletes and maintain relationships with them, ”the specialist expressed the opinion.

She stressed that at the moment, talented children in Russia have no choice but to go abroad if they want to play tennis at a professional level.

“This happens, firstly, due to the fact that in winter it is impossible for us to play on open courts.

Many were forced to leave for other countries.

Secondly, tennis from the very first stages is not an amateur sport.

To score points, you need to participate in international competitions from the age of 11.

Only after that they will pay attention to you, sponsors will appear.

In Russia, tennis is practically not funded by the state, if you do not take into account children's and youth sports.

Such a system in this form has existed in the country for a long time, and it is stupid to blame the guys for fleeing to the West.

Otherwise, we simply would not have tennis and all the victories, ”the deputy noted.

At the same time, she, like Yanchuk, recalled that Medvedev did not make a single controversial political statement - on the contrary, in all situations he took the side of Russia.

“You can remember how, during the Olympics, Medvedev responded harshly to a provocative question from a journalist about doping and repelled an attack from his side.

Daniil regularly received negative comments from the stands even before the start of the special operation in Ukraine, but he never denied his homeland, ”Zhurova added.