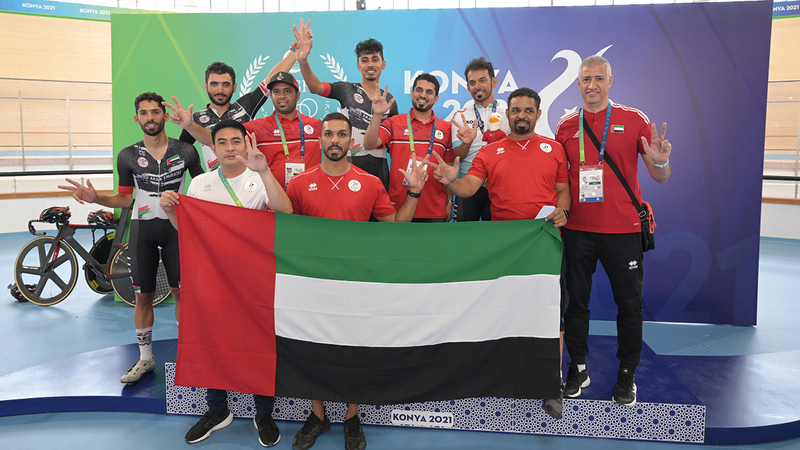 Ahmed Al-Mansoori, the UAE national cycling team player, won the first gold medal for the UAE in the history of its participation in the Islamic Solidarity Games in the Track Scratch competition, as part of the activities of the fifth edition of the Islamic Solidarity Games held from the 9th to the 18th of this month, in Konya, Turkey, with the participation of 6000 athletes from 56 countries competing in 24 sports through 483 competitions.

The UAE won 13 colored medals in all its participation in the Islamic Solidarity Games since the first edition of the session in 2005 until the last edition in Baku 2017, with 4 silver medals and 9 bronze medals, for the cycling team to score the first gold medal in the event.

Al-Mansoori came first, ahead of his Iranian counterpart Behnam Arian, who won second place, while Kazakhstani cyclist Yusr Zumkan won bronze in third place in the competition, which witnessed the participation of 19 cyclists in the men's category, while 16 players participated in the women's category.

Al-Mansoori dedicated the golden achievement to the leadership and people of the United Arab Emirates;

For his part, Mansour Bouaseba, President of the Cycling Federation, presented the historic achievement in the fifth cycle to the wise leadership, stressing that Ahmed Al-Mansoori promised to achieve this medal before the cycle and fulfilled.

He valued the support of the National Olympic Committee for the Cycling Federation, noting that what was achieved is the result of the perseverance of all cyclists, the technical and administrative staff and members of the Federation's board of directors, promising more medals.