Al-Zaabi after introducing the new coach: Al-Wahda is determined to win the League and the Cup

The head of the football company in Al Wahda Club, Rashid Al Zaabi, confirmed his club's determination to be the champion of the President's Cup and the League Championship next season. Al Zaabi said during a press conference yesterday, to present the Portuguese coach, Carlos Carvalhal: "Unity remains in the eyes of everyone a permanent competitor. on me 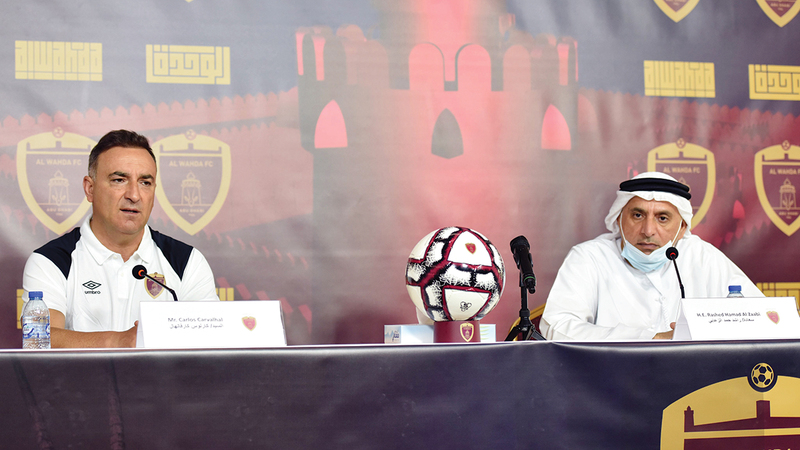 He announced 3 reasons for choosing Carvalhal to lead "Al Annabi"

Al-Zaabi after introducing the new coach: Al-Wahda is determined to win the League and the Cup

The head of the football company in Al Wahda Club, Rashid Al Zaabi, confirmed his club's determination to be the champion of the President's Cup and the League Championship next season.

Al-Zaabi said during a press conference yesterday, to present the Portuguese coach, Carlos Carvalhal: “Unity remains in the eyes of everyone a permanent competitor for all championships, and this is what happened in the past seasons, specifically in the last two seasons, but there are some things that prevented the team from standing on the podiums.” coronation.”

He added: “The team’s focus at the beginning of the preparations for the new season focuses primarily on the President’s Cup, which is an important tournament for the sports system in the club in general and for the fans in particular. Including the league championship, which we seek to win next season, bearing in mind that this will be the ambition of many league teams, and this is a legitimate right for all.”

On the reasons for choosing Carlos Carvalhal to coach Al Wahda next season, Al Zaabi said: “His choice came after a careful and extensive study of a group of foreign coaches, and there was a set of advantages that came in favor of the Portuguese coach, most notably his experiences and successes with the clubs he worked with in the past, and the presence of More than one Portuguese player in Al-Wahda squad has previously worked with the coach, in addition to his knowledge of Emirati football due to his previous experience working with Al-Ahly youth before. And this made us completely convinced of the contract with Carlos Carvalhal.”

And on whether the football company plans to contract with national players after the foreigners’ file has been resolved, he said: “We are confident in our group of citizens, and if a citizen player is available who may add to the team technically, we will not hesitate to contract him, and to be more realistic, we will not hesitate to sign him.” There are distinguished players whose contracts with their clubs have expired that we can attract at the present time, and the distinguished players are linked to contracts with their clubs and cannot be easily neglected, so we thought, after coordination with the coach, to call all resident players who were loaned last season, to other clubs to put them under technical evaluation Waiting for the coach’s technical opinion on them.”

Al Wahda Club agreed with its Saudi counterpart, the Jeddah Union, to play a friendly match between the two teams on August 12, during the camp that will bring the two teams together in Austria.

The unit had started preparations for the new season the day before yesterday with the participation of all the players, as the players are scheduled to take a two-day vacation on the occasion of Eid Al-Adha before continuing the preparations in the internal camp and before traveling to Austria on June 19 and continuing until August 14.

The new coach of Al Wahda, Carlos Carvalhal, expressed his great admiration for the reception and the way it worked within Al Wahda Club. He said in a press statement: “I got a good impression of the club on the first day of my work with the team. This was evident through my conversation with them and through the training session that we held last Wednesday.”

He added: “What I can promise everyone, whether the administration and the fans, is to work as hard as possible to reach the goals set, and to perform perfect football, and also to be frank with everyone, I cannot promise to win championships, because this depends on the size and ability of the work that we will do.” Especially during the preparatory period for the new season.

He pointed out: “I have studied the Al-Wahda team in more than 20 matches, and there are some things that we have stood on, most notably the attempt to improve the quality of work within the team and make it work in a coordinated manner between its three lines, and this is what Al-Annabi was missing in some matches, and when we reach the image of consistency that I want her to win matches and that brings us closer to winning trophies.”

On how to deal with the attacking trio of Tigali, Omar Khribin and Joao Pedro, Carvalhal said: “There is no doubt that any coach will be lucky to have this trio in his squad, and if they were not here, I would have requested a contract with them. These players and others can help the team score goals because My style depends on scoring in every game and not conceding goals.”

"The choice of Carvalhal came after a careful and extensive study of a group of foreign coaches."