Author of a masterful coup, the Belgian Wout van Aert flew over the fourth stage of the Tour de France, Tuesday in Calais, and consolidated his yellow leader's jersey on the eve of attacking the cobblestones... 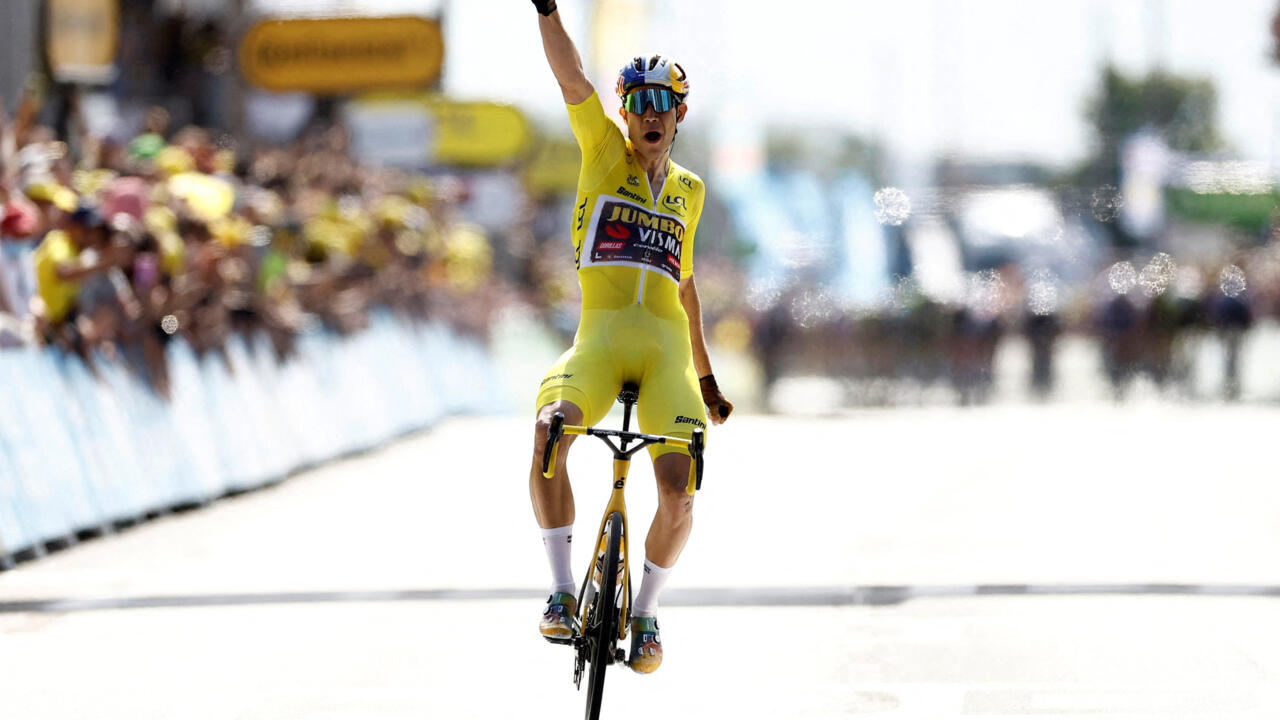 Wout Van Aert waves his fist as the winner at the finish of the fourth stage of the Tour de France 2022. July 5, 2022. REUTERS - CHRISTIAN HARTMANN

Author of a masterful coup, the Belgian Wout van Aert flew over the fourth stage of the Tour de France, Tuesday in Calais, and consolidated his yellow leader's jersey on the eve of attacking the cobblestones of Paris-Roubaix.

I didn't want to take any risks in the sprint, better to arrive alone

The Belgian, an all-terrain runner, had finished second in the first three stages, in Denmark, in the time trial and then in the two sprints.

To sign his seventh stage victory in the Tour, van Aert (27) made the best use of the collective strength of his team in Cap Blanc-Nez, the last hill of the route.

Eleven kilometers from the finish, no one was able to follow him on this spectacular ramp above the chalky cliffs, without any shelter.

The Frenchman took third place in the stage just behind Belgian Jasper Philipsen, who briefly thought he had won.

He had not seen the van Aert plane take off.

With the team, we checked off this stage with the firm intention of toughening up the race at this precise location

In the massive sprints, our automatisms with Wout are not yet fully developed.

Coming alone was the best way for him to win

Launched by his teammates (van Hooydonck, Benoot), van Aert cleaned up in a few steep hectometres.

"I did what I could to follow but I couldn't," admitted Briton Adam Yates, who was the last to keep in touch with Dane Jonas Vingegaard, van Aert's teammate.

The episode, sudden and brutal, shed light on the forces of the moment within the two teams which have several leaders to destabilize the holder, the Slovenian Tadej Pogacar.

When we heard over the radio that there was damage, I went full throttle to the top then looked behind me, saw Jonas with Adam Yates, he didn't have to ride .

, ”said van Aert to explain his dizzying finish and his resistance to the peloton launched after him (ten seconds for nine kilometers, 26 for five kilometers, eight on arrival).

With the related bonuses, the Belgian increased his lead to 25 seconds over his compatriot Yves Lampaert before the cobblestone stage, in theory to his advantage.

As proof, the second place in the last Paris-Roubaix of WVA, three times world champion in cyclo-cross at the start of his career.

However, the Jumbo team assured that it would favor its riders in the general classification.

Wout will be at their service

”, repeated on many occasions the Dutch formation which seeks to combine several ambitions, the green jersey for van Aert and also the yellow jersey.

It's a day of great tension that awaits us

", recognizes Vincent Lavenu, the boss of the AG2R Citroën team whose leader, the Australian Ben O'Connor (fourth in the Tour 2021), is a neophyte of the pavers.

If Tadej Pogacar only ran Paris-Roubaix in juniors (13th in 2016), he appeared very comfortable in early April on admittedly less aggressive cobblestones during the Tour of Flanders.

In the opinion of his opponents, this type of stage is far from playing against the Slovenian who displays great technical ease.

Less, of course, than the incredible van Aert.