The return of Tutberidze, a declaration of love for Zagitova and Kostornaya's dresses: what is being discussed in the world of figure skating

Eteri Tutberidze returned to Moscow after a vacation in the United States and resumed work with her wards. Alexandra Trusova scored a double in a comic match with CSKA players. Designer Alena Kuklycheva spoke about Alena Kostornaya's dresses for the new season. At the training camp in Sochi, 81-year-old Tamara Moskvina showed students how to jump rope correctly. And the defender of the Japanese national team, Sei Muroya, confessed his love to Alina Zagitova. What is discussed in the world of figure skating - in the material RT. 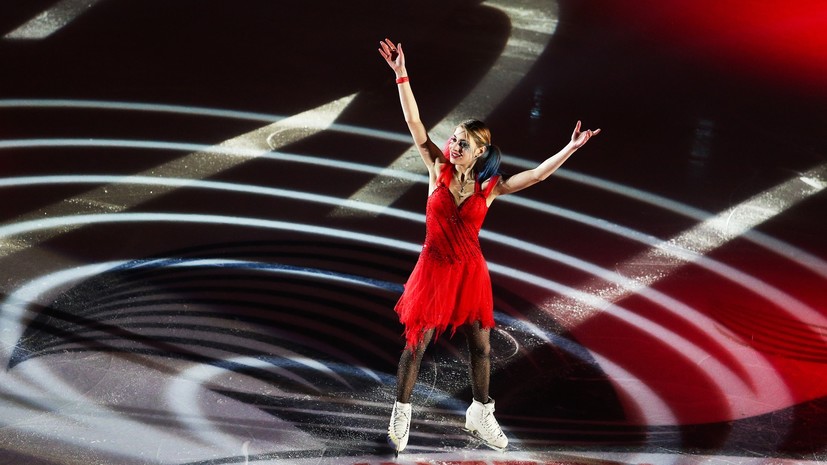 Perhaps the main event of the past week in the world of figure skating was the return of Eteri Tutberidze from the USA.

The honored coach of Russia was late on vacation, and against this background, rumors began to appear that she could allegedly stay overseas forever.

Even denials from Tatyana Tarasova and Renat Laishev could not extinguish the fire that had flared up.

At some point, the famous coach seemed to have lost her nerve from the incessant questions, to one of which she reacted quite sharply.

“Are you generally touched by the mind, or what?

Did she say she would stay there?

Someone came up with this.

She never intended to stay, shame on you.

Stop expressing your thoughts out loud, we know how you can denigrate a person, ”Tarasova said.

The point was set on Thursday, June 30, when Tutberidze flew to Moscow.

And already on Friday, she started working at the training camp of her group in Novogorsk.

“Eteri Georgievna is now with the girls, they are all training together.

Any rumors about her are nonsense.

With the return of Tutberidze, her skaters began setting up programs for next season.

So, for the new short Kamila Valieva, the music from the movie "Interstellar" was chosen.

“There is a message waiting for you inside the program,” choreographer Daniil Gleikhengauz wrote on the social network.

The chosen composition caused a positive response among experts.

For example, coach and choreographer Betina Popova noted that she is suitable for figure skating.

“Music is strong, famous and multifaceted.

Camila will definitely look organic in it, ”the former TASS figure skater quotes.

Nothing is known about Anna Shcherbakova's new programs yet, but the Olympic champion has prepared an indicative number, which she will perform at Averbukh's show "Champions" in Sochi.

The choreographer did the production.

According to him, it turned out to be philosophical: the skater will take to the ice to the verses of Bulat Okudzhava.

“We made a very beautiful, soulful number.

I'm sure the audience will definitely appreciate him, even in training he looks stunning.

It was an amazing collaboration.

- Averbukh wrote in his Telegram channel.

In general, work on preparing for the season is in full swing in all coaching staffs.

So, the groups of Svetlana Sokolovskaya and Evgeny Rukavitsyn held a fruitful gathering in Kislovodsk.

Tamara Moskvina and her wards work in Sochi.

At one of the classes, the renowned specialist, who recently turned 81, demonstrated to the students how to jump rope.

I wasn’t even out of breath, ”Moskvina emphasized.

In Sochi, the team of Alexei Mishin also held a training camp.

In a month they plan to go to the highlands in Courchevel.

As Tatyana Mishina said, their group tries to go to the same place every year, as training there is good for endurance.

She also noted that the programs of the leading athletes - and Elizaveta Tuktamysheva, and Mikhail Kolyada, and Evgeny Semenenko - are already ready, now the main task is to hone their performance.

Designer Alena Kuklycheva said that she would sew both dresses for Alena Kostornaya for the competition programs of the new season.

As noted by the specialist, she discussed the issue of future design with the figure skater's mentor Elena Buyanova.

“Everyone has different tastes, and I wanted to understand what the coach wants to see Alena in.

I caught her mood right away.

That the neckline needs more, and the legs so that it can be seen.

Elena Germanovna said: “The girl is an adult, beautiful, let everything be seen,” shared Kuklycheva.

The designer has already sewn three dresses for the 2020 European champion: a blue one for the act to Sevara’s song “There’s no me there”, a blue one to replace him, because Buyanova didn’t like the previous one, and a red outfit for the Harley Quinn number.

It was the last work that the skater herself liked the most: she said that “the dress is fire.”

The designer admitted that she could not meet the deadline with tailoring, but the athlete reacted to this with humor.

“At the very beginning of work, I told her that we had little time, I was afraid not to have time.

She says: “Yes, somehow we’ll stab me, pin them with pins, it’s okay.”

She is a bit of an adventurer.

Positive, cool, funny, and it seems to me that this can be seen from the performances, ”Kuklycheva shared.

Zagitova - about favorite brands and charity

While Kostornaya is preparing new outfits for the season, Alina Zagitova "walks" hers at social events.

On June 30, the Irina Viner-Usmanova Gymnastics Palace hosted the ceremony of awarding international awards in the field of sports and betting, the RB Prize 2022. The Olympic champion arrived there in a stylish set of black trousers, a corset of the same color and a blue jacket.

At the same time, the skater admitted that sportswear still makes up most of her wardrobe, and she prefers Saint Laurent and Prada from secular brands.

Alina attended the event as an ambassador for the T-shirt Gives Life foundation, and this element of her clothing was put up for auction along with her personal skates.

“I do charity work not only for animals.

This also applies to children in orphanages: I give away toys and help them financially.

There is also one child with cancer, to whom I regularly donate money for treatment.

I hope for his recovery and that everything will be fine, ”said Zagitova in an interview with RT.

And recently, Alina received an unusual declaration of love from the defender of the Japanese national football team, Sei Muroi.

He now plays for Germany's Hannover '96 alongside Russian-raised Cameroonian Gael Ondua, who teaches him Russian.

In one of the videos posted on Ondua's Telegram channel, Muroya demonstrates his progress.

I am from Japan.

I love Zagitova,” said the player.

Double Trusova on the football field

They not only watched their colleagues, but also took to the field themselves.

The girls played a match against Ivan Oblyakov and Igor Diveev, and Konstantin Kuchaev acted as their mentor.

As a result, they beat the army team with a score of 2:1.

Trusova scored a double in an impromptu match.

The players who lost had to perform the Axel as a punishment.

The athletes were delighted with the new experience, but Tarasova was apprehensive about such experiments.

“I think every skater can try to develop in addition to figure skating.

We all do different things anyway.

We have many guys in athletics, which is included in everyday activities.

When a person lives, he tries himself in everything.

And if they want, then please.

But I wouldn’t touch football, it’s not worth it, because these are legs, and legs need to be protected, ”RBC-Sport quotes Tarasova.