Find out the results of the Wimbledon tennis tournament

Fourth-seeded Spaniard Rafael Nadal did not find any difficulty in reaching the quarter-finals of Wimbledon, the third grand slam in tennis, by defeating Dutchman Botique van de Zandschulp 6-4, 6-2, 7-6 (8-6) on Monday. Nadal to win his third title in a row in B 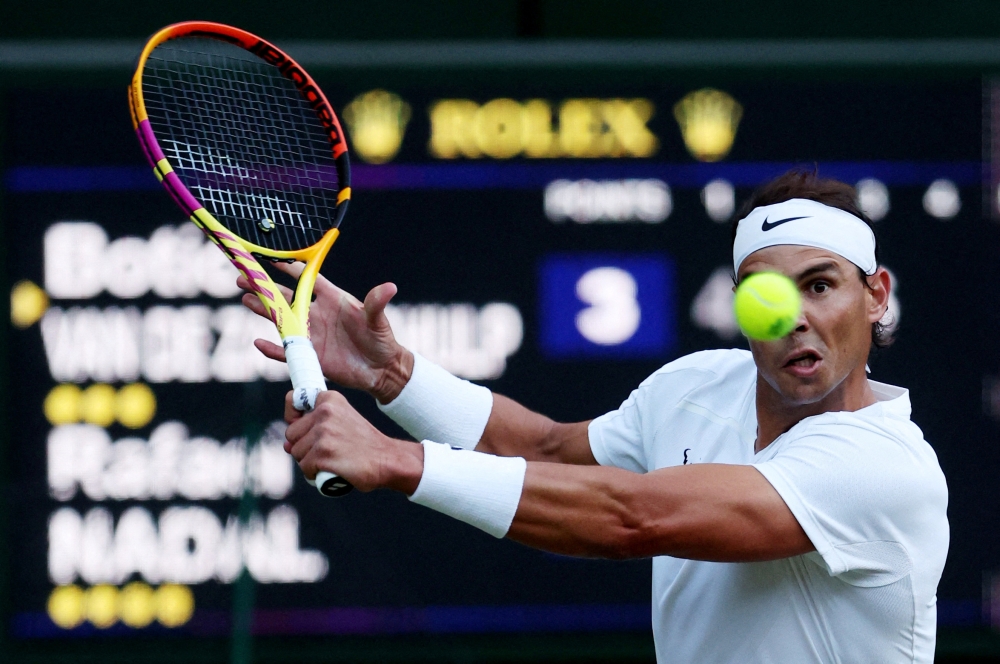 Find out the results of the Wimbledon tennis tournament

Fourth-seeded Spaniard Rafael Nadal did not find any difficulty in reaching the quarter-finals of Wimbledon, the third grand slam in tennis, by defeating Dutchman Boutik van de Zandsscholp 6-4, 6-2, 7-6 (8-6) on Monday.

Nadal is seeking to win his third consecutive Grand Slam title after winning the Australian Open at the beginning of this year and then at Roland Garros last month, raising his yield to 22 major titles.

Nadal had also defeated his Dutch opponent in the Roland Garros Championship, who won the title for the 14th time in his career (a record).

It will not be easy to meet Nadal in the next round against American Taylor Frits, after the latter defeated him in the final of the American Indian Wells tournament last March.

The Spanish matador broke his opponent's serve in the tenth game and settled the first set in his favor in 42 minutes.

Nadal, the record holder in the number of titles in the Grand Slam tournaments (22 titles), continued his advantage in the second set, advancing 3-0 and winning it easily 6-2 in 38 minutes.

In the third set, Nadal led 5-3 with his serve to end the match, but the Dutchman broke his serve before equalizing the score 5-5 and then 6-6 and imposed a tiebreak, which the Spaniard won with difficulty 8-6 and won the match in one hour and 41 minutes.

Nadal is seeking his third title on Wimbledon grass after 2008 and 2010.

"Personally, being in the quarter-finals of Wimbledon after missing the tournament for the last three years is fantastic, so I'm very, very happy," Nadal said.

"I think I played in a positive way until the end when I had a bad game (he lost his serve at the end of the third set)," he added.

Contrary to his bad behavior in his last match against Greek Stefanos Tsitsipas, Kyrgios was calm throughout the match and came out victorious.

It is the first time that Kyrgios has reached the quarter-finals at Wimbledon in 8 years, where he will face Chilean Christian Garin, and his first in a major tournament since the Australian Open in 2015.

Kyrgios relied on his clean serves of 35 throughout the match despite a shoulder injury called up Enter the attending physician, and his expertise to overcome the obstacle Nakashima.

"I've played a lot of matches in the last month and a half," said Kiroes.

Kyrgios considered that his victory over Nadal in his first participation in Wimbledon in 2014, when he was ranked 144th in the world, helped him to win today's match, saying, "I had one of the best matches of my career when I defeated Nadal. All these experiences that I lived helped me win today."

Former world number one Halep will meet American Amanda Anisimova, who defeated French Armani Tan 6-2, 6-3 in the next round.

"Reaching the quarter-finals means a lot to me, especially after I've had a lot of injuries and a lack of self-confidence," Halep said.

She added, "I work hard every day. I am very happy with the way I am playing now. I play with high self-confidence and enjoy being on the pitch."

Kazakh Elina Rybakina reached the quarter-finals at Wimbledon for the first time, defeating Croatian Petra Martic 7-5, 6-3, and she will meet in the next round Australian Ajla Tomljanovic, who defeated France's Alize Cornet 4-6, 6-4, 6-3.

Cornet had achieved a heavy surprise in the previous round by taking out the Polish Iga Švientek, ranked first in the world, ending a series of 37 consecutive victories for the latter.

It is noteworthy that Rybakina of Russian origin, who obtained Kazakh citizenship in 2018, has not lost any group so far in the tournament.