The new Arsenal player, Brazilian Gabriel Jesus, coming from Manchester City on a long-term contract, is facing the curse of the “number 9”, which has always caused a psychological or physical crisis once it was worn by the club’s players, specifically after the departure of the Frenchman Anelka and the arrival of the Croatian Davor Suker in Mo 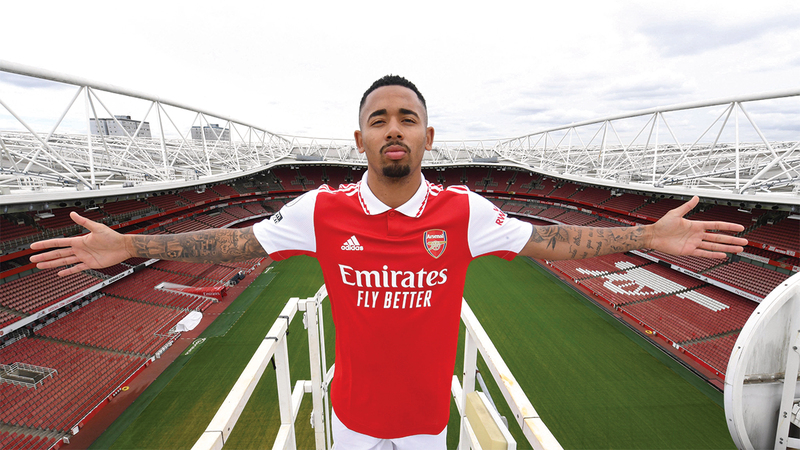 "Number 9" hit stars in bulk .. From Sucre to Lacazette

Arsenal's new English player, Brazilian Gabriel Jesus, coming from Manchester City on a long-term contract, faces the curse of "the number 9", which has always caused a psychological or physical crisis once it was worn by the club's players, specifically after the departure of the Frenchman Anelka and the arrival of the Croatian Davor Suker in the 1999 season. -2000, and since that time no player has been able to carry this number to show the size of the ambitions of the "gunners" fans, due to his weak technical level or exposure to injuries.

Jesus, whose transfer to Arsenal is worth 45 million pounds (about 55 million dollars), hopes to expel negative thoughts from his head and search for himself in the synthesis of Spanish coach Arteta, especially since his numbers with his former team Manchester City were relatively good, as he scored 95 He scored in 236 matches in various competitions during five years, and won him the English Premier League title four times, the FA Cup and the League Cup three times.

Prominent stars had been cursed by the “number 9” in Arsenal, starting with the Croatian Davor Suker, who played one season with Arsenal from Real Madrid, and failed to present his credentials, after he only scored 11 goals in 39 games, to go the following season to West Ham , passing through the English striker Francis Jeffers, who came from Everton in 2001, but played 39 games, scoring only eight goals in three seasons, as well as the Spaniard Jose Antonio Reyes in 2003 (he scored only 23 goals in 110 matches), then the Brazilian Julio Baptista (scored 10). Goals in 35 games), and Croatian Eduardo da Silva in 2007, who suffered a severe injury that affected his performance (he scored 21 goals in 67 games).

The negative series extends to the South Korean striker in 2011 (he scored one goal in seven matches), then came the German Lukas Podolski from 2012 to 2015, but he did not provide what was expected of him as in the “Manchester” team (he played 82 games in which he scored 31 goals), followed by Lukas Perez in 2016, but the curse of injuries chased him (he scored seven goals in 21 games).

Finally, the ominous number moved to the French Lacazette, who improved the attacking fortune of the “ominous number” within five years, and his contract expired on June 30 (he scored 71 goals in 206 matches).

To view the issue in full,