“I didn’t expect it at all”: Polyakova - on being elected to the FINA commission, leaving for the USA at the age of 17 and her attitude to the fight for medals

The election to the FINA Athletes' Commission was an absolute surprise. This was stated in an interview with RT by European champion in diving from a meter springboard Maria Polyakova. According to her, in this post it is necessary to do everything possible so that the athletes can compete as comfortably as possible. She also told how, at the age of 17, she decided to leave to study in the USA, explained why she now lives in Kazan, and spoke with enthusiasm about the Olympic swimming pool in Tokyo. 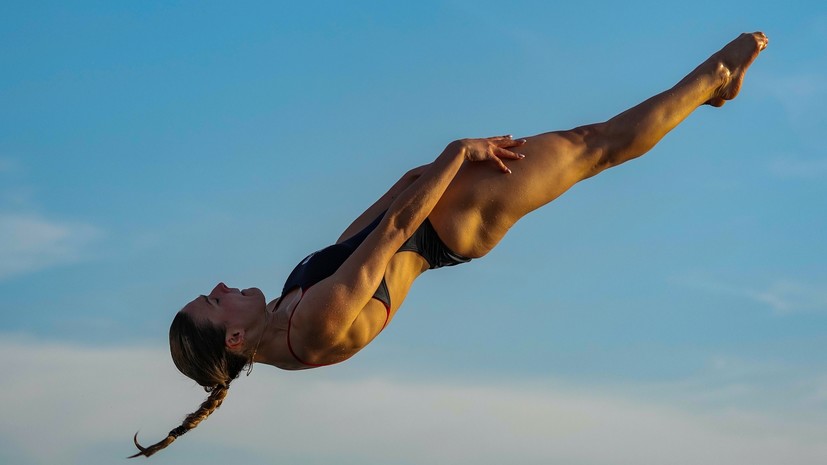 - Sydney Olympic champion Vera Ilyina, who left to study in the USA after the Atlanta Games, explained her step by the fact that she was tired of losing forever and feeling like a second-class athlete.

Accordingly, she wanted to change her whole life and try to restart her career.

What motivated you when you went to America at the age of 17?

“I really wanted to get an education at an American university.

The fact that this process can be combined with diving has become a very big additional plus.

— What did moving to another country look like at the household level?

- The idea was first expressed by my coach Vladimir Viktorovich Rulev, who at one time worked with Vera.

I was then only 13, so I didn’t take the words that it was necessary to go to study in America too seriously.

Well, when I finished school, those conversations were remembered.

Although it was scary.

I didn’t really know the language, but I set myself up decisively: either now or never.

Together with my mother, we began to look at the rankings of universities - primarily those with a diving team, and send resumes to mentors.

Someone immediately refused, someone advised me to come in a year, but I did not want to waste time.

So I got to the University of Los Angeles to coach Tom Stebbins.

- Tom himself jumped, graduated from Yale University with a degree in psychology, and started coaching quite early.

He never had athletes of my level, but he had great ambitions.

I immediately felt how much he wants to achieve the result.

Although at first it was hard: we argued a lot.

Some of the things that Tom offered me, I never did in Russia, so an internal protest arose involuntarily.

- Can you give an example?

- In America, it is customary to place great emphasis on strength training, on swapping.

Now I understand that the whole sports world is moving in this direction one way or another, but then it was unusual.

I did strength work three times a week in addition to training in the pool, and I simply hated the barbell.

Additionally, Tom included a lot of strength training in our regular routines.

All this coincided with the period of growing up, weight began to increase, I naturally got upset, tried to protest, but then everything somehow returned to normal.

- What exactly can work with a barbell give a diver into the water?

- It is very important that the coach be very professional and understand exactly what qualities need to be developed.

You can pump up “heavy” muscles, or you can “explosive”.

Correct work is immediately felt: lightness appears on the springboard, it becomes much easier to perform jumps.

- You are a European champion and winner of the European Games on a one-meter springboard.

What kind of projectile is this from the point of view of a diver into the water?

- He is not an Olympic, unfortunately.

Therefore, in 2016, although I won the national championship, I could not go to the Olympic Games in Rio de Janeiro.

At one time, Vladimir Viktorovich gave me a rather difficult adult program on it, which is probably why it was always easy to compete.

Have you ever jumped from a tower?

- Only up to 13 years old and then not from ten meters.

I can jump something simple even now from the tower, but I have never had a serious program on this projectile.

Did circumstances force you to return to Russia at the beginning of 2020?

In the spring, I competed at the World Series in Canada and planned to go to the next stages in Kazan and London.

They released me from the start in Kazan, put another synchronized duet on the springboard, and Kristina Ilyinykh and I were given the opportunity to rest and prepare for the English stage.

But just at that time, the pandemic began, and the borders were closed.

As a result, all my things remained in California, they were packed by a neighbor and handed over to the coach for safekeeping.

Until now, some boxes are in his garage.

Later, my mother managed to pick up some of the things - she found the opportunity to fly to the United States while her visa was valid.

- Your family lives in Moscow, you yourself live in Kazan.

— Swimming pools have begun to close in the capital, and sports infrastructure has just begun to develop powerfully in Kazan.

So I moved, in a nutshell.

I train with Pavel Borisovich Muyakin, I jump both from the "meter" and from three - in a synchronous pair with Vita Koroleva.

Is your motivation still high?

- I look at diving as my main job, and I try to do it as best as possible.

- I remember how in 2017 at the World Championships in Budapest you became fifth on the one-meter springboard and said that you were satisfied, because you scored the best amount of points in your career.

Is it really the result that matters, not the position?

- It is clear that the fifth line is not the ultimate dream, but then I jumped really well.

It's just that the competition was more than serious.

Therefore, she was satisfied with herself.

But if I had won the World Championship with a failed jump, of course, the mistakes would not upset me.

- Does the complexity of the programs allow you to withstand competition?

Although it is clear that you need to think about a more solid complication.

I tried doing two and a half turns forward with two screws (now I do with one), and these attempts came out, shall we say, promising.

We just need to work on it.

- Was your election to the FINA Athletes' Commission a surprise for you?

A few months ago, our head coach Svetlana Borisovna Moiseeva asked: “Do you mind if we nominate you?”

I answered no, but I didn’t expect at all that against the background of the current suspension of Russian athletes from international competitions, I would really be chosen somewhere.

- What is the meaning of such an organ in your opinion?

I haven't thought about it yet, to be honest.

But I was glad that, at least, I will now be aware of everything that happens in the world of aquatic species, and not just in jumping.

One of the main areas of work of such a commission should, it seems to me, be to make it as comfortable for athletes as possible to compete.

The larger the tournament, the more you have to reckon with the requirements of television.

And they quite often run counter to the interests of those who speak out.

For example, when the finals are scheduled right next to each other, it is not always possible to fully warm up.

With the current difficulty of jumping, this is simply dangerous.

You are a linguist by education.

How much is this specialty in demand in the future?

- The diploma of my university is quoted in Russia, it does not need to be additionally confirmed somehow, although I know that not all American diplomas are so valued.

Linguistics itself can have a fairly wide applied value, but before starting to work in this specialty, I would like to continue my studies at the magistracy.

I didn’t plan, let’s say, that I would have to study at home.

- Last summer, you married a water polo player, and, as far as I know, your husband left to play in Serbia.

So you live on opposite sides of the border?

- At first we lived like that - we decided that we would not quit sports while we were young.

Several times I flew to him in Serbia, and now the club season is over, and he returned to Kazan.

- Can you name the best pool you have ever played in?

In 2017, when we arrived at the World Cup in Budapest, everything seemed perfect to me.

And when the European Championship 2021 was held in the same pool, it was very cold inside, and I didn’t like jumping there at all.

Cool pool opened at the Games in Tokyo.

For jumpers, after all, it is very important that there is a full-fledged gym, and not just gymnastic mats thrown on the floor.

In Japan, it turned out to be wonderful: with trampolines, springboards, foam rubber pits.

The boards themselves were of amazing quality, they did not creak.

- How realistic is the fight for medals in your opinion, provided that domestic jumpers return to the international level in the near future?

- It is quite possible.

Many strong athletes ended their careers after the Tokyo Games, and it is quite possible to fight with those who remain.

I just made it a rule for a long time not to look around, but to do my own thing.

And be what will be.