He was so convinced of the mechanical superiority of the Red Bull that he himself, as his closest associates perceived, was the first surprised by the pole. When Carlos Sainz... 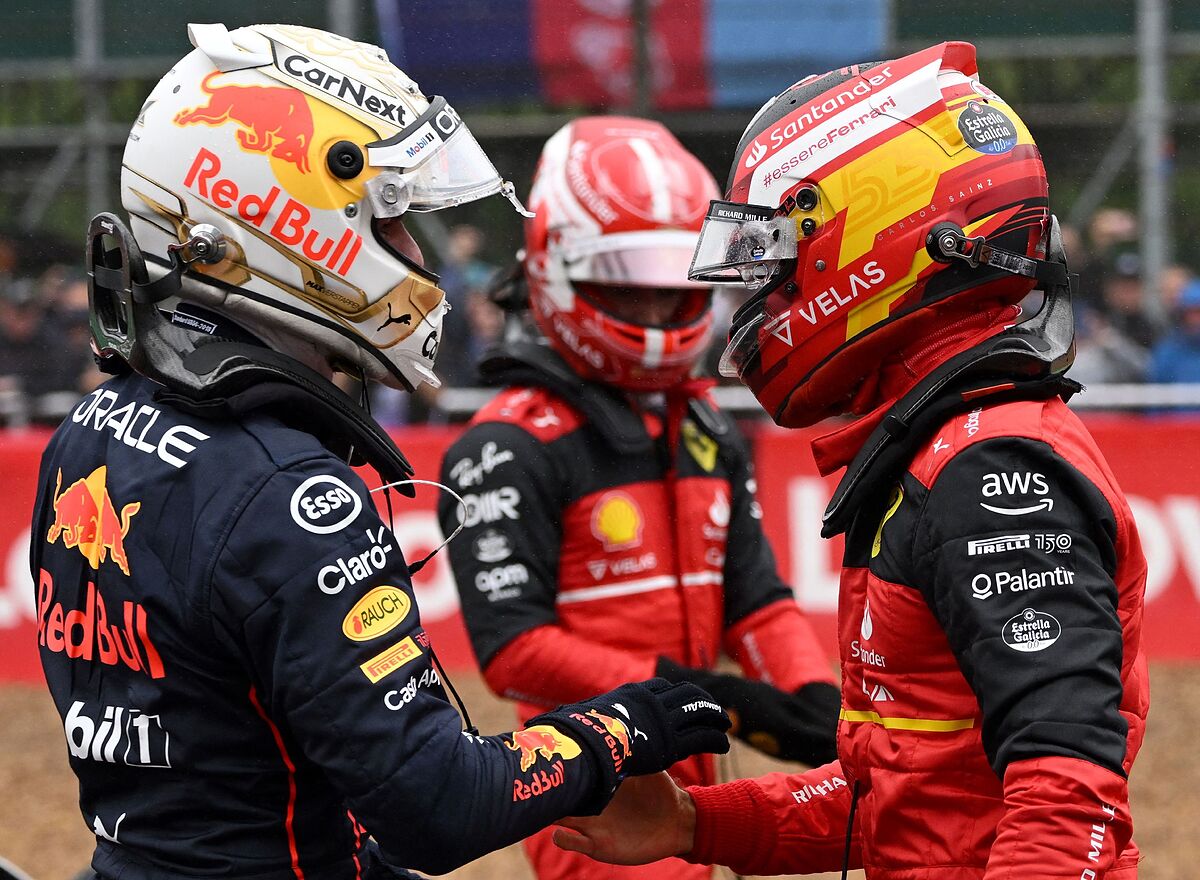 He was so convinced of the mechanical superiority of Red Bull that he himself, as his closest associates perceived, was the first to be surprised by

jumped out of the car on the finish straight yesterday he still looked dazed.

Or, somehow, more cautious than the occasion warranted.

Because during the brief commemorative ceremony, where he stamped his signature on the tyre-trophy, it was

who raised the great protagonist's right arm yesterday at Silverstone.

"We knew that Red Bull was going very, very fast and its pace was almost unapproachable. That is why this success has more value," they commented in the Ferrari

just an hour after Sainz gave himself the great joy of the year.

They had left behind an extraordinarily tense Q3, with

alternating in the lead.

One of those moments before the monitors that the public of

Drive to survive celebrates so much

"I know I'm not very expressive, but I carry my emotions inside. I didn't need it like rain in May, so I haven't taken the joy of the century either. I was confident that this moment was going to come," he admitted from the area mixed.

Faced with the attacks of the great favorites, Sainz had known how to keep a bullet in the chamber.

Until marking the differences in the last sector, precisely the most flooded, as was evident from the beginning of the session.

In those meters, the ones that separate the Stowe curve from the most twisty area of ​​​​Vale and Club, Carlos kept the helm firm.

Leclerc, the ogre who had soured his Saturdays until now, spun badly at the end of the second sector and Verstappen had to get up.

"I was saving the risk"

Before that blunder, the Monegasque was ahead of

But those accounts are worth nothing, because what is involved under such delicate conditions is to balance the return.

From end to end.

"If there's one thing I've learned this year, it's that you have to go fast in Q3, so I was saving the risk for that moment," said the former Renault driver, who was able to close his time (1:40.983), despite to run out of battery shortly before crossing the finish line.

"It was a real hell because at times it rained and then I left it. The puddles alternated with the dry areas," they commented on the outskirts of the red garage when the sun was already peeking out, with British modesty.

So, Sainz returned alongside

, and his legion of engineers.

Everyone began to design the strategy for the race, where they seem to rule out the option of a soft tire from the start.

According to the simulations on Friday, Red Bull has a two-tenths lead in the long runs.

And Ferrari needs to minimise, as far as possible, the annoying

that reduced its performance in the very fast Copse area.

"It will be a more even race than some may think," they warned from Sainz's closest circle.

"And of course it would be good for us if Max and Charles got tangled up in the first lap, to open some gap," they added.

"The pace on Friday was very good, although this morning we had quite a few problems that affected our confidence", completed Sainz, who will start with the logical uncertainty of not knowing which car he will meet.

If the powerful of Friday or the hesitant of the free 3.

Prudence continues to be a maxim for the man from Madrid, although he has the desire to archive a date forever: May 12, 2013. The Sunday in Montmeló in which

secured the last Spanish victory in F1 and ended up being investigated by the commissioners for giving the lap of honor with the rojigualda flag.

Nobody will be so long on Sunday, nor will he do as much to contain his nerves as Sainz Sr., who this weekend, unlike usual, has not traveled to Silverstone.

The two-time world champion is on vacation in Mallorca and will not decide to take a plane to enjoy the race live until the last minute.

There is so much history in every corner of this circuit, exemplarily renovated to adapt to modernity, that it is hard to imagine a better setting for the feat.

"I have very good memories of this track, because here I got my first

in single-seaters and here I did my first test in F1, with Toro Rosso and Red Bull," Sainz recalled yesterday.

Those almost adolescent babblings date back to 2010, in Formula BMW, and 2013, with Toro Rosso and Red Bull.