In favor of the champions: how Adesanya defended the title for the fifth time, and Volkanovski defeated Holloway again at UFC 276

Israel Adesanya defeated Jared Kannonier in the main event of UFC 276 to defend his middleweight title for the fifth time. The Nigerian completely outplayed the opponent and did not allow the American to overcome the mark of 100 significant blows. In turn, Alexander Volkanovski defeated Max Holloway for the third time and defended the featherweight title. Also, the show in Las Vegas was remembered for the knockout defeat of Robbie Lawler, the unexpected end of the duel with the participation of Sean O'Malley and Pedra Munoz, as well as the departure of Donald Cerrone from the sport. 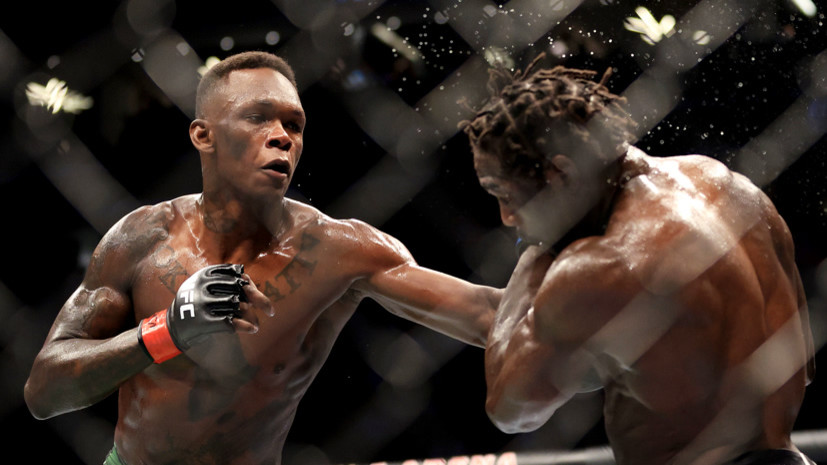 Despite the absence of Russian fighters in the list of participants in the tournament, UFC 276 could be safely called one of the most anticipated in the past few months.

After all, the show in Las Vegas was remembered by top athletes and significant events.

Potentially the last bout of Donald Cerrone's career, bouts involving the star Sean O'Malley and the legendary Robbie Lawler, as well as two title battles at once, stood out in particular.

Israel Adesanya had to face off against Jared Kannonier, and Alexander Volkanovski had to clash with Max Holloway for the third time.

In the main event of the evening, the middleweight belt was at stake.

Until now, Adesanya has already managed to defend the title four times and few doubted that he would be able to do it again.

After all, Kannonir opposed him - physically strong, but not the most skilled fighter.

He managed to travel in three weight categories, but achieved success in the division up to 83.9 kilograms.

However, in order to defeat the Nigerian, he needed to jump over his head, and there were simply no prerequisites for this.

On the stand he was much less resourceful and also lacked the necessary wrestling skills to keep Israel on the floor.

And what happened in the octagon in the first two rounds fully met expectations.

Perhaps Kannonir was confused by the phenomenal performance during the appearance of Adesanya, who tried on the image of the legendary wrestler The Undertaker, but in battle he was extremely passive.

If the conditional Yoel Romero and Robert Whittaker at least tried to put pressure on Israel, then Jared acted as the second number and only stood at an uncomfortable middle distance for himself, becoming an easy target for enemy attacks.

It was also striking how rarely Jared himself hit Israel on the head.

On the one hand, in the first ten minutes he struck 37 blows, but only seven of them hit the “top floor”.

In the rest of the time, little has changed.

Despite the fact that in the third round Kannonir managed to score a couple of good hits, he could not beat Adesanya in any of the five minutes.

At the same time, his unwillingness to work for rapprochement was especially surprising.

He made his first attempt to initiate a clinch only at the end of the 11th minute of the fight, and managed to succeed only in the next segment.

But he did not succeed in repeating Whittaker's achievement and transferring Israel to canvas.

Adesanya remarkably defended himself from passes to the legs, and the American did not really insist.

Even the coaches could not revive Kannonir.

Before the fifth round, they told him that he was losing with a score of 1:3, so he had to try to win ahead of schedule.

But it was only enough for a couple of outraged fans of clinches at the net and one good hit.

Jared could not do anything with Adesanya's timing and sense of distance, landed almost 30 fewer punches (90:116) and limply conceded.

All the judges sided with Israel, and one did not see the superiority of the applicant in any of the five minutes (50:45, 49:46 - twice).

Adesanya has cemented himself in second place in terms of the number of title defenses and is a little closer to reaching Anderson Silva.

In total, the Brazilian owned the belt for 2457 days and during this time defended it ten times.

And to take another step towards the record, Israel will most likely have to fight Alex Perreira, to whom he lost twice by kickboxing rules, and in the second case by knockout.

At UFC 276, he dealt with Sean Strickland in just 156 seconds and received a bonus for "Performance of the Night".

With a left hook, he caught him on the counterattack, and finished off with a right straight.

Unlike Adesanya, the UFC featherweight champion was just about to reach a clean second place in terms of defenses.

And for this, it was necessary for him to again take precedence over those with whom he shared this line.

But not only this made the third duel between Alexander Volkanovski and Max Holloway so long-awaited.

For an American, defeat could well mean the end of a career in the division up to 65.8 kilograms and a transition to the light category.

The main intrigue was what exactly Holloway would do to finally get the better of Volkanovski.

Previously, they had already met twice and both times the judges sided with the Australian.

In the second case, the decision was rather controversial, but it did not change the essence of the matter.

Alexander remained an extremely uncomfortable opponent for the former king of the division and so far has never allowed him to realize his plan for the fight.

This was at least confirmed by the fact that the record holder for the number of significant blows per fight (445) has never been able not only to kill the Australian, but also to reach the mark of 150 hits in full-time duels.

It didn't happen at UFC 276 either. Volkanovski was faster, sharper, more accurate, and once again didn't let Holloway create any really serious problems for himself.

Even Brian Ortega was closer to defeating the reigning champion when he caught him with a choke three times.

Max, although he had the opportunity to work at an average distance, was always one step behind.

Alexander foresaw all his actions and immediately answered.

As a result, it was Volkanovski's third victory over Holloway that turned out to be the most devastating and left no doubt as to who deserved to be the champion.

Alexander not only outplayed, but beat the challenger, another evidence of which was a huge cut on his left eyebrow.

And this is not counting the colossal difference in the number of accurate hits - the largest in the framework of their confrontation (199:127).

Among other things, the tournament in Las Vegas was remembered at once by two major losses of former promotion stars.

A few years ago, Robbie Lawler held the welterweight title and Donald Cerrone was a step away from the lightweight belt, but now both were in decline.

On the eve of this show, they had five defeats in their last six fights, and another failure could draw a line under their careers.

As a result, both lost in the second round, while it was especially insulting for Lawler.

Unlike Cerrone, he looked great in the cage and managed the incredibly active Brian Barbarena for a long time.

He constantly attacked, but Robbie was more accurate and even shook the enemy several times.

He was especially helped in this by non-standard hand movements, vaguely reminiscent of elements from the Chinese martial art of Wing Chun.

Lawler himself also missed quite a lot, and one of the hits was fatal.

Barbarena hit with an elbow, after which he unleashed a flurry of blows on the opponent.

Referee Mark Smith considered that the ex-champion was in a standing knockout and stopped the battle.

And although Robbie lost again, a small compensation for him will certainly be a cash bonus for the "Fight of the Night" - the fifth in his career.

Cerrone, on the other hand, performed much less successfully.

He barely made it through the first round, where he almost got caught in the net of pain master Jim Miller.

But in the second, he was still forced to knock.

A high-kick attempt turned into a fall, which the opponent instantly took advantage of.

Donald was locked in a guillotine and could not get out.

The cowboy suffered his 17th defeat, after which he announced his retirement from the sport.

It is noteworthy that a few minutes ago, Jessica Eye did the same, failing to take over for the fourth time in a row.

As for Miller, he not only got revenge for the loss of eight years ago, but also set the record for the Ultimate Fighting Championship in terms of the number of wins.

On his account there were 24 won fights - one more than Andrei Orlovsky and the same Cerrone.

In turn, the performance of Pedro Munoz ended in failure.

The 35-year-old veteran got off to a good start against rising bantamweight star Sean O'Malley.

He chose not to try to hit the lanky opponent's head, but to focus all his attention on his legs.

After all, earlier problems with them have already become the cause of his fiasco.

In 2020, Sugar was injured during a fight with Marlon Vera and allowed him to win an early victory.

But there was also a duel with Andre Suhamtat, during which he could hardly move around the cage.

In two incomplete rounds, Munoz delivered 26 significant blows and all of them to the lower limbs of the enemy.

The springboard for a future victory was ready, but an accident occurred.

In one of the episodes, he received a poke in the eye and could not continue the battle.

Apparently, Pedro hoped that O'Malley's actions would be considered deliberate and disqualify him, but the referee thought otherwise.

The fight was declared invalid, which is unlikely to go into the hands of Pedro.

Sean may well refuse to meet again with the Brazilian and agree to measure his strength with Petr Yan.