Zhu Ting joins the Italian club, and the trip abroad is worth looking forward to!

Chinanews client, Beijing, July 2 (Reporter Wang Hao) On the evening of the 2nd Beijing time, the Italian Women's Volleyball League Scandic Club announced that Chinese player Zhu Ting has officially joined and will represent the Scandic women's volleyball team. Season League, and Zhu Ting also posted photos of her jersey on Weibo. Zhu Ting said: "I am very happy to join Scandic, and I am looking 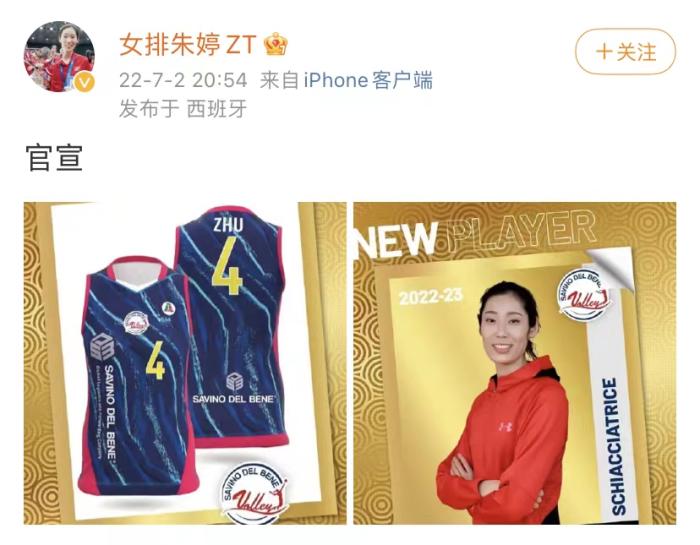 Zhu Ting said: "I am very happy to join Scandic, and I am looking forward to returning to the game."

Once the news was announced, many fans were very happy and left messages "see you at the stadium".

There are also fans who joke that they will watch the game with jet lag in the future, worrying about their hair loss.

In fact, this is not the first time for Zhu Ting to play overseas. In 2016, Zhu Ting, who held the World Cup and the Olympic double at that time, chose to join the Turkish Volleyball Super League giant Vakif Bank.

Since then, Zhu Ting started her "honor harvest" road.

In the first season of landing in the Turkish Super League, Zhu Ting successfully helped the team win the Champions League. She also achieved a spiking success rate of 52.92% and an efficiency of 40.91%, both ranking first. The main attacker with a smash success rate of more than 50%.

In the second season, Zhu Ting, who was getting better and better, began to conquer Turkey and even European volleyball.

In the third year of joining Wakif Bank, Zhu Ting withstood a severe test under the targeted protection of opponents, and the team also missed the Champions League final and cup championship.

But in the two championships the team won, Zhu Ting won the MVP.

In the first three seasons of studying abroad, Zhu Ting led the team's performance to improve with his super strength, helped Wakif Bank to win 8 championships in various competitions, and personally won the MVP 6 times.

The high attention Zhu Ting has won by her performance has also enhanced her popularity and influence around the world.

Data map: Zhu Ting is in the game.

In May 2019, Wakif Bank announced on its official website that Zhu Ting would leave the team due to preparations for the Tokyo Olympics.

In 2021, Zhu Ting will compete with the team for the Tokyo Olympics, but at this time she is suffering from wrist injuries.

Due to various reasons, the Chinese women's volleyball team, which has been in ups and downs, finally failed in the Olympic group stage.

In the subsequent Shaanxi National Games, Zhu Ting joined the Henan Women's Volleyball Team, but did not play.

After the National Games, Zhu Ting gradually faded out of everyone's vision, and treating injuries became her most important task.

In April this year, Zhu Ting shared her recent situation on Weibo. In the photo, Zhu Ting's wrist went from being padded with gypsum board and wrapped in a thick bandage to only being wrapped by a wrist bandage.

After successful wrist surgery, Zhu Ting has made great progress in recovery from injury.

According to media reports, Zhu Ting continued to stay in Europe to recuperate after the operation, in order to observe the European high-level volleyball league and provide more experience and help for future growth.

"I will heal the injury first, and then give myself a vacation to calm myself down." Zhu Ting said of her future plans, "Only after leaving for a while before facing volleyball, will you gain a new level of understanding. promote."

Zhu Ting, who is in her prime, is confident in her future career.

She said that she will also strive to return to the national team, work hard for the Chinese women's volleyball team, and play at least two more Olympic Games in the future.

Now, Zhu Ting has decided to join the Scandic Club, and she is about to embark on the road of studying abroad again.

I hope Zhu Ting's injury recovers smoothly, and I also look forward to her return full of blood, who once dominated the arena!