Rumors about the transition to the US team and a secret marriage: how Davis and Smolkin became the most discussed figure skaters in Russia

Diana Davis denied information about the transition, along with partner Gleb Smolkin, to the US team. According to her, the skaters intend to continue to compete for Russia and are waiting for test skates. However, she did not comment on the rumors about their personal life and supposedly secret marriage. Shortly before this, a video of the rental of dancers for the US Figure Skating Federation (USFS) appeared on social networks. According to media reports, in the near future they may receive a special invitation to participate in intra-American tournaments. 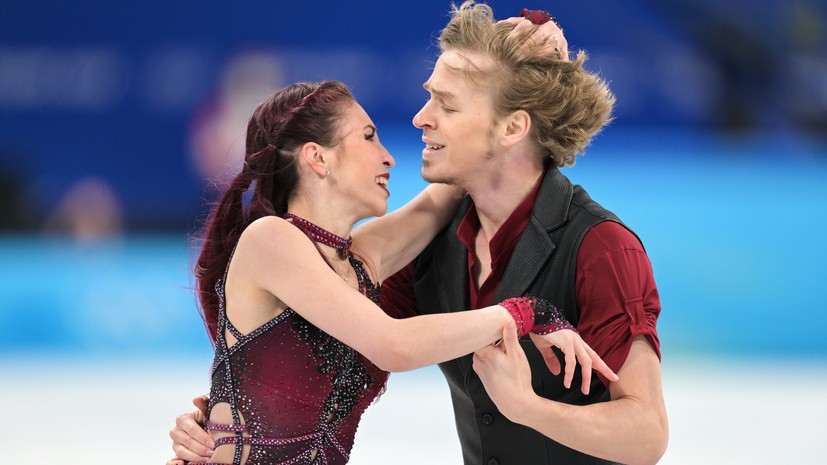 Diana Davis and Gleb Smolkin can safely be called the most discussed domestic figure skaters at the moment.

For the past month, fans have been worried about their possible transition to the US team, and with it a secret marriage for the sake of obtaining American citizenship for a partner and even the departure of Eteri Tutberidze with her daughter.

The ice dancers remained silent to the last, but on the night of Thursday to Friday, Davis nevertheless published a post on social networks in which she denied the main rumor.

According to the girl, they, along with Smolkin, remain part of the Russian national team and are looking forward to the test skates.

The athletes also confirmed what was said for a long time - they no longer cooperate with Igor Shpilband and began working in the team of Elena Novak and Alexei Kilyakov.

Next, the specialist himself announced the departure of the former wards.

“A couple of weeks ago we decided to leave the group of Igor Shpilband... Under his leadership, we made a huge leap forward in skill, in our individual and partner skills.

Finally, she refused to comment on her personal life and noted that the athletes "try to protect her", thereby not giving a negative answer to the question of a possible wedding.

However, even assurances of readiness to represent Russia did not dissuade the fans of the opposite.

After all, a little earlier, a video was published from the rental of athletes for the US Figure Skating Federation (USFS), which was allegedly watched by the head of the ISU technical committee on ice dancing, American Sean Rettstatt.

However, media reports differ on this issue.

So, a TASS source said that the duet did indeed perform for the USFS, but not in order to change sports citizenship.

At the same time, the option is not ruled out in which the skaters will have the opportunity to go to the start in intra-American competitions by special invitation.

“There is a certain agreement that Diana and Gleb will show their programs to specialists and coaches of the local federation.

Especially while they plan to stay in Nevada, and making frequent flights from the United States to Russia at the moment will be quite problematic, ”the source said.

The arrival of Tutberidze in North America also raised many questions.

It is noted that she flew to help her daughter and her partner to resolve the conflict with Shpilband.

According to one version, they themselves want to return to him, but the coach is not ready for this yet.

And Eteri Georgievna has allegedly already returned to Moscow and should soon reunite with her group in Novogorsk.

They made me believe in the possible relocation of the dancers to the USA and the comments of individual experts.

For example, Renat Laishev, the president of Sambo 70, where both are listed, did not even deny the rumors.

“There are no other reasons why Tutberidze is detained in the United States.

This is the right of the guys to play for another federation, for God's sake, let them ride.

They can show all their skills anywhere, and still remain ambassadors of Russian ideas and thoughts, ”the Championship leader quotes.

And coach Alexander Zhulin, who collaborated with the couple, bluntly stated that “there is no smoke without fire,” and did not rule out that they are considering such an option for themselves.

“Russia is not clear for how long it has been excommunicated... She is an American, if he marries her, she will also become an American.

In the event of a change of citizenship, they will be able to compete at the stages of the Grand Prix, World Championships, the Four Continents Tournament, so I do not exclude such a possibility.

A difficult decision, only they know how it will be better for them, ”TASS quotes Zhulin.

Nevertheless, the Russian Figure Skating Federation (FFKR) has not yet confirmed the information.

The general director of the organization, Alexander Kogan, called it nonsense at all.

Moreover, Davis and Smolkin were included in the national ice dancing team for the next season in June.

RT columnist Elena Vaitsekhovskaya did not rule out such an option, according to which, in the event of a transition, all parties will benefit.

Diana and Gleb will have a real opportunity not only to compete side-by-side with the strongest competitors and compete in international competitions, but also to win gold in the Olympic 2026 team tournament as part of the North American national team.

“No matter how much Davis and Smolkin skate, in Russia they will always be accompanied by a train of thieves, and the results will be called into question.

Despite the position of the third couple in the country, Diana and Gleb were hardly objective last season, which greatly upset those who could not find a place in the Olympic team.

Now the opponents have a chance to compete with each other honestly (as far as possible in ice dancing), and with the "thieves' couple" - in absentia.

At the same time, she does not expect that their possible departure will launch a wave of changing sports citizenship among domestic skaters.

“Not a single country in the world pays for the training of its figure skaters in the amount in which this is done in Russia.

Before you refuse such money, it is worth considering and weighing everything.

And ask yourself the question: are you ready to bear these costs yourself?

And quite obviously, the Davis/Smolkin case stands apart here.

I definitely wouldn’t make any generalizations and far-reaching forecasts on it, ”Vaitsekhovskaya added.

It is curious that most of the insiders about the dancers were launched by the already mentioned American journalist Dave Leese.

In particular, he wrote that the athletes, who are a couple in life, secretly got married.

Confirmation of this information appeared on the portal Clerk.clarkcountynv.gov, which allegedly presents documents on marriage registration, which was issued on March 18 in Nevada.

The skaters eventually refused to comment on their personal lives, as did the partner’s father, the famous actor Boris Smolkin, who said that he knew nothing about his son’s marriage.

And later, in an interview, Liz said that Tutberidze not only decides on the transfer of her daughter and her young man to the US team, but she herself is of interest from local schools.

“There are no formal barriers.

I know at least one skating rink that would agree to hire her in this case, because of the potential financial benefits that such cooperation promises.

Many parents will appear who are ready to pay money to Eteri.

This does not mean at all that she will be able to bring up new champions, but her coaching activity here will, no doubt, be very profitable, ”he said in an interview with Sports.ru.

And the last month the specialist really stayed with the duet in North America.

For example, she was present at the rink during the training of athletes with Benoit Richaud, who is ready to put on programs for them.

He admitted that he was impressed by the communication with the famous coach.

“I feel every day and every experience is a learning process.

I am firmly convinced that you need to extract the best from any meeting.

I was lucky to have such a wonderful experience with Gleb, Diana and Eteri.

I was happy to have meaningful conversations with Eteri, share our ideas about figure skating, its progress and future, ”Match TV quotes Risho as saying.