In one draw from the sequel: Nepomniachtchi guaranteed himself participation in the tie-break of the Candidates Chess Tournament

Ian Nepomniachtchi in the 12th round of the Candidates Tournament broke the world with one of the main pursuers Hikaru Nakamura. Only nine minutes after the start of the game, the opponents agreed to a draw. Thanks to Teimuraz Radjabov's success against Ding Liren, the Russian grandmaster almost secured his victory in Madrid. In the two remaining games, it is enough for him to get one draw in order to win the selection for the second time in a row and again meet the world champion Magnus Carlsen. 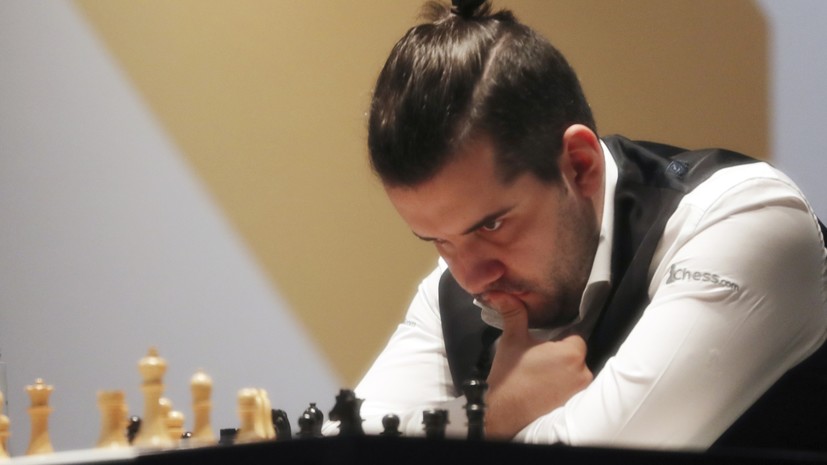 It seemed that after losing to Magnus Carlsen in the match for the chess crown at the end of last year, Ian Nepomniachtchi would not have time to recover for the Candidates Tournament.

However, the Russian put the skeptics to shame and proved that he is still worthy of the title of the best grandmaster on the planet.

Few people could have imagined that three rounds before the finish of the Candidates Tournament, he would be 1.5 points ahead of the nearest pursuer, not having a single defeat in the liability.

After a strategically important draw with one of the main rivals Fabiano Caruana, a native of Bryansk achieved more than acceptable results for himself.

First, he agreed to a peaceful outcome with Teimuraz Radjabov, and then for the second time within the framework of the competition he taught a lesson to the young Alireza Firoudja, and this time he won with black.

Even before the meeting with the leader, the opponent lost all chances for the first place and spent the night before the confrontation with the domestic athlete playing on the Internet with the commentator of the tournament Daniel Naroditsky.

The Frenchman, according to the Israeli grandmaster Emil Sutovsky, played 250 games and did not win a single one.

It is not surprising that after such a tired chess player in the evening he made a number of gross mistakes and again lost to the Russian.

In addition, the persecutors continued to give him gifts.

For example, Caruana, who after the first round was breathing in the back of the ex-challenger, lost to outsider Jan-Krzysztof Duda and Ding Liren, who failed to start the competition.

The misfires of the competitors gave Jan the opportunity in the 12th round not to jump above his head, but to calmly break peace with Nakamura as black.

The match turned out to be extremely fleeting.

For the debut, the opponents chose the classic Berlin opening.

Then they exchanged horses.

It seemed that the intrigue in the confrontation famously twisted.

However, this impression turned out to be deceptive.

Only nine minutes after the start of the game, after repeating the moves three times, the sides gladly agreed to a draw.

You can understand chess players.

The Russian already had an impressive lead over his pursuers, and therefore he had no need to take risks and give in to one of his main opponents.

As for the American, it was more important for him to maintain his position before the decisive confrontations with Duda and Liren.

In such a short period of time, the opponents managed to earn € 3.5 thousand each. This is the amount FIDE estimates a draw at the Candidates Tournament.

But the Chinese missed a great opportunity to close the gap from the leader to one victory.

Playing with White, he unexpectedly lost to Radjabov, who was playing.

The Azerbaijani looked great in the opening, and the representative of the Celestial Empire, who got to Madrid at the last moment due to the removal of Sergey Karyakin, once again fell down and gave up.

Thus, the Russian, two rounds before the finish line, secured at least participation in the tie-break.

Nakamura and Liren are exactly two points behind him and still have a hypothetical chance of catching up.

For a domestic chess player, in order to keep the first line, it is enough to achieve at least one draw in the remaining matches.

At the same time, he will have to meet with outsiders - Rapport and Duda.

Therefore, there is no doubt now: a native of Bryansk will become the first person to win the Candidates Tournament twice in a row under the current format.

But it's not a fact that Carlsen won't refuse another match for the chess crown.

On the eve of the competition, the Norwegian noted that he only wanted to play with a representative of the younger generation, that is, Firouzja, but the Frenchman performed unsuccessfully.

In this case, the athlete who takes second place can get the right to fight for the title of the strongest.

Despite the serious advantage of Nepomniachtchi, ex-world champion Anatoly Karpov advised him not to relax in the end.

“We need to bring the tournament to victory, and for this it is important in the remaining games not to think that the job has already been done and not to allow relaxation.

In general, Jan plays brilliantly, what can I say?

Many predicted a successful tournament for Firuja, and even Carlsen called him his next opponent, only with him he was ready to play for the chess crown.

The poor results of the young chess player in Madrid were a revelation, ”TASS quoted Karpov as saying.

In turn, grandmaster Sergei Smagin called the €3.5 thousand earned for a draw in the confrontation with Nakamura the easiest money in a Russian career.

He also noted that after the defeat from Carlsen, contrary to expectations, he only became stronger.

I think now Ian can truly be considered a contender for the chess crown.

Let's hope the tournament ends as it should," Smagin said in an interview with Gazeta.Ru.