The great image of Carlos Alcaraz on the grass: "It was myself"

The plasticity of the image, its point of risk and precision, the firm right arm, the attentive gaze in the execution, the left arm above, academically pacing the... 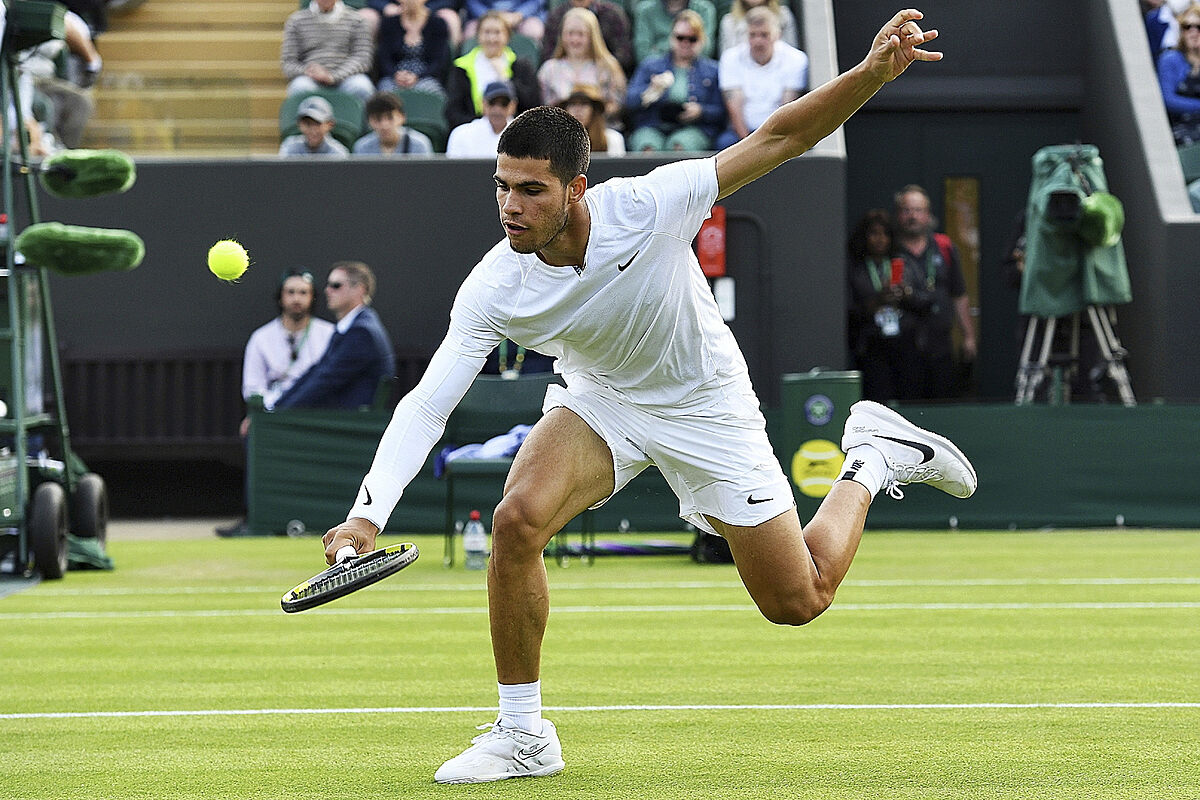 The plasticity of the image, its point of risk and precision, the firm right arm, the watchful eye in the execution, the left arm above, academically pacing the movement, offers an accurate approximation to the tennis player who sneaked in for the first time in the sixteenth of Wimbledon final.

It is not that Carlos Alcaraz has mutated into a consummate practitioner of the noble art of the volley, but it is true that he left a more recognizable stamp in relation to the player who has been raising justified waves of passion in the season of his explosion.

«It was myself», he left as an accurate sentence, recently captured by the microphone on court 2, Tallon Griekspoor already out of the game, whom he liquidated 6-4, 7-6 (0) and 6-3 shortly more than two hours.

After a delicate landing in the debut match, five sets against

, some doubts, the Spaniard brought us the close memory of his victories in Miami, Madrid, Rio and Barcelona, ​​the greatness, also, of his quarterfinals last year at the United States Open, of the same record a few weeks ago in Roland Garros, the halo of a determined, courageous tennis player who takes pleasure in playing with a playful attitude.

If in the debut he recognized that he had been dissuaded after a couple of failed attempts to apply himself with the serve and volley, if then we saw little of him on tape, this time, as the grass canons advise, he left up to 24 times to be defined online, 16 of them with a happy ending.

Yes, it was the jovial tennis player who gives away dreamy shots, like a fine conjurer.

“Every second I spend on a tennis court amuses me.

And the results come like this », he added, in a ratification of his inalienable ideology.

in the quarterfinals of Paris, where he arrived with the momentum of the two consecutive titles in Barcelona and Madrid, with the dimension of his triumphs in the Caja Mágica against Nadal, Djokovic and Zverev himself, and the physical problems in the right elbow that led him to get off Queen's had somewhat dimmed the glow of a man who, it should not be forgotten, has just turned 19.

Not even 30 aces against Struff brought back the well-earned reputation of the early part of the season.

He didn't need dazzling numbers to get his head around and regain credit against Griekspoor.

Alcaraz is still a neophyte on grass, but it seems clear that sooner than later he will move on it with the same skill that he already does on clay or concrete.

"I need more hours on the track"

“I felt comfortable on court 2. Obviously, the first game [last Monday, on court 1] was played indoors.

It was really different.

I noticed the slower court.

But I need more hours on the track to feel even better », he explained at a press conference.

It is easy to glimpse those who claim a future in such a unique territory.

In addition to natural conditions, with a service that usually responds to his call in relevant situations, such as the resolution of the first two sets, with two direct serves, he has the predisposition to adapt to the specific circumstances of the game, and to do so with total naturalness.

He doesn't shake his pulse when it comes to raising with the rests either, because he knows that it is a primordial blow in a place where everything happens very quickly.

When he saw that it wasn't working for him to change balls, he opted for a more direct proposal, but even there he didn't get more profit than reaching a tiebreaker where he stayed at zero.

Only a slight distraction from the Spaniard in the third set prevented an even faster outcome.

He corrected quickly and is already waiting for the German Oscar Otte, 36th, recent semifinalist in Stuttgart and Halle.