And the flowers are born! Chen Yuxi and Quan Hongchan swept gold and silver medals in 10-meter platform at World Championships

In the early morning of the 28th Beijing time, the 19th World Swimming Championships ended a battle of focus.   In the women's 10m platform final, the two famous Chinese players Chen Yuxi and Quan Hongchan once again stunned the world with their wonderful performances. The two won the gold and silver medals in the event with 417.25 and 416.95 points respectively.   After the game, Chen Yuxi an 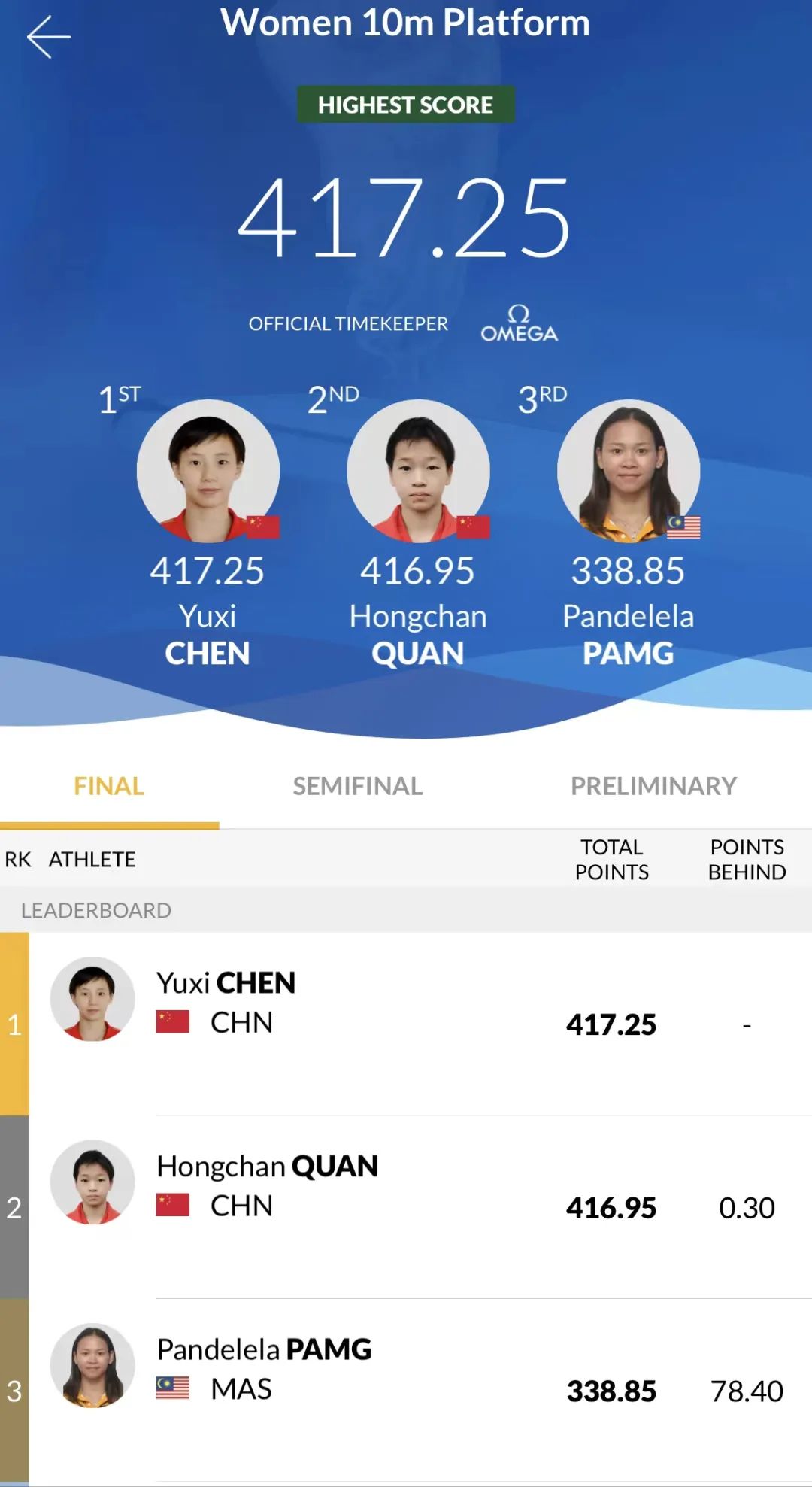 In the early morning of the 28th Beijing time, the 19th World Swimming Championships ended a battle of focus.

In the women's 10m platform final, the two famous Chinese players Chen Yuxi and Quan Hongchan once again stunned the world with their wonderful performances. The two won the gold and silver medals in the event with 417.25 and 416.95 points respectively.

After the game, Chen Yuxi and Quan Hongchan embraced each other for a long time on the sidelines amid the cheers of the audience.

At this moment, no more words are needed.

The 16-year-old Chen Yuxi and the 15-year-old Quan Hongchan grew up together in the beautiful years.

Although the game was held in the early morning of Beijing time, it is undeniable that this may be one of the most watched duels since the start of the World Championships.

In front of the screen late at night, countless diving fans shouted and congratulated the two little girls.

From the preliminaries to the finals, Chen Yuxi and Quan Hongchan have always been the focus on the field, and the huge lead they have established is dubbed the "fault-style" ranking by the audience.

In the final, Quan Hongchan played better in the first two sets of moves and took the lead in establishing a lead.

However, there was a flaw in the 207C action, and only 61.05 points were scored. In the previous preliminaries and semi-finals, Quan Hongchan also made mistakes in this action.

It was also after this action that Chen Yuxi jumped to the first place.

After that, both of them completed the follow-up actions very well, and the difference was finally fixed at 0.3 points. Chen Yuxi won the championship of this event in the World Championships.

Acquaintance on the field

In the women's 10-meter platform final at the Tokyo Olympics, 14-year-old Quan Hongchan used 3 perfect moves to make many people remember her name.

In that match, it was Chen Yuxi who won the silver medal.

After that, these two girls who appeared as geniuses were often mentioned by people.

When it comes to the acquaintance of Chen Yuxi and Quan Hongchan on the field, it may be traced back to October 2020, when the National Diving Championship and the Tokyo Olympics and World Cup qualifiers were held in the Swimming and Diving Hall of the Hebei Olympic Sports Center.

After the semi-finals, Chen Yuxi of the Shanghai team, Lu Wei and Ren Qian of the Sichuan team ranked in the top three.

But in the final, Ren Qian and Lu Wei made mistakes one after another, and Quan Hongchan gradually established the lead.

With the perfect 5253B action, she successfully reached the top with a single jump score of 91.20.

"I didn't think I could beat the world champions on the court today. I didn't know the sisters in the national team, and I didn't talk to them. They congratulated me when I won the championship. I want to go to the Olympics, but I'm afraid of competing head-on with my sisters. But I still want to take the first place in the next game." Quan Hongchan said shyly after the game.

Join hands to go to Tokyo

Ren Qian, who won the gold medal in this event at the Rio Olympics, Zhang Jiaqi, who was born in the 2017 Tianjin National Games, Lu Wei, who shined at the 2019 Gwangju World Swimming Championships... In the Chinese diving team, which is full of famous athletes, in the women's 10-meter platform In the trump card project, Quan Hongchan and Chen Yuxi finally stood out.

The picture shows Chen Yuxi in the game.

The duo who performed well in the trials joined hands to compete in the women's 10-meter platform.

Perhaps from then on, everyone began to pay attention to these two "post-00" girls.

Before the expedition to Budapest, Chen Yuxi said to the camera that she and Quan Hongchan had a healthy competitive relationship.

"I think the two of us are healthy competition, and only with competition can we improve. Whether she is better or me is better, we will face the competition and results with a stable attitude, and hope that everyone can play a good level. "

On the road of growth, the two have jointly witnessed the growth of each other's strength.

In Chen Yuxi's eyes, Quan Hongchan is obedient and mischievous, meticulous in training, and lively and lovely in life.

In this World Championships, Chen Yuxi and Quan Hongchan will also partner in the women's double 10-meter platform event.

As a brand new combination, both of them have paid a lot in order to shorten the running-in time.

In the team test match before the departure, Chen Yuxi, who has more experience in the competition, will help Quan Hongchan relieve the pressure.

The two, who are both opponents and partners, work together to achieve their dreams.

Data map: In the women's 10-meter platform finals at the Tokyo Olympics, 14-year-old Quan Hongchan jumped out of full marks three times in the competition and won the gold medal with her excellent performance.

"The strength is outstanding, and the pedestal gives birth to flowers." This is the compliment that many audiences have sent to Chen Yuxi and Quan Hongchan. Thinking about it carefully, it is very appropriate.

Standing at the moment, the two are already the leaders of the Chinese team in the women's 10-meter platform.

With the entrustment and hope of their predecessors, the two young girls are writing the honor of Chinese diving on a new page.