The story of overcoming: how Nichushkin went from a meme hero to a Stanley Cup winner in three years

Valery Nichushkin became the 36th Russian who managed to win the Stanley Cup. A native of Chelyabinsk, he made a significant contribution to the Colorado championship. With nine goals, he was the team's third sniper in the playoffs, losing only to team-mates Nathan McKinnon and Gabriel Landeskog. And four goals in the final series with Tampa allowed him to repeat the club's record of 21 years ago. At the same time, three years ago, the forward did not score in the NHL during the 91st meeting and was the object of ridicule. 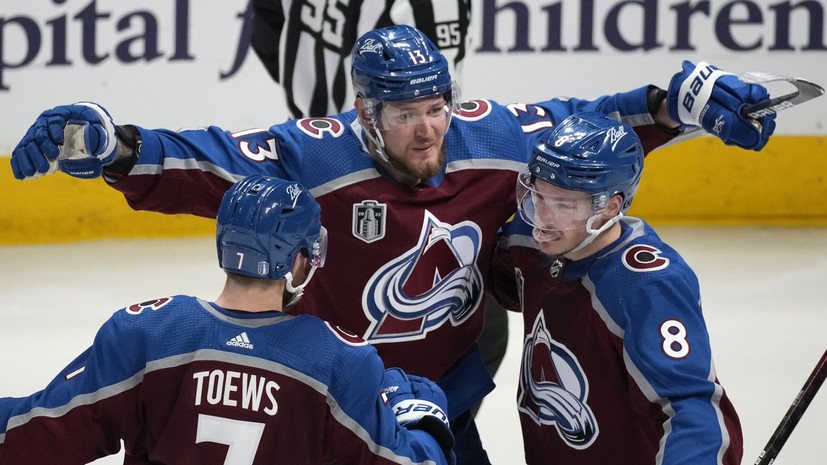 Starting from the 2015/16 season, at least one Russian has invariably become the owner of the Stanley Cup.

This draw was no exception.

Valery Nichushkin won the honorary trophy as part of the Colorado for the first time in his career.

After the end of the sixth match with Tampa Bay, the 27-year-old native of Chelyabinsk did not hide his emotions.

He, along with his partners, jumped onto the ice and vigorously celebrated a historic success.

And after the cup was presented, he was one of the first to raise it above his head.

The celebration continued in the locker room, where the striker set the tone.

He drank champagne straight from the trophy of captain Gabriel Landeskog, wearing ski goggles, and then photographed completely naked in the NHL championship belt.

For some reason, the athlete left the stadium on a cart.

One can only imagine how Nichushkin will celebrate the victory in the coming days.

However, the emotions of the Russian are understandable, because his career is an impressive story of overcoming.

In just a few years, he has managed to go from being a meme hero to one of the best power forwards and gaining a foothold in a team that lacks players capable of playing the role of first violin.

If now experts do not spare compliments to the Russian, then in August 2019, when Avalanche signed a contract with him, they shrugged their shoulders in bewilderment.

And there were good reasons for this.

A year before, the Chelyabinsk player, who at the age of 18 decided to move to Dallas and made a bright debut in the league, tried to restart his career in the NHL and, after two seasons at CSKA, again went overseas.

But the return failed.

For 57 matches of the regular championship, the striker managed not to score a single puck and gave only ten assists.

As a result, the Russian was naturally put up for a draft bounce.

And the fans even created a public page on social networks called “Did Nichushkin score?” Dedicated to the goalless series of an athlete in the NHL.

As a result, she stopped at around 91 matches.

Anyone else in his place could give up, give up on everything and fly away to finish playing in his native Chelyabinsk, where one of the main local talents, along with Evgeny Kuznetsov, will always be greeted with open arms.

But the striker chose a difficult path and wished to prove to himself and the rest that he was still able to prove himself at the highest level.

Nichushkin in Colorado was not scared off by either extremely modest conditions (annual salary of only $ 850 thousand), or the role of a hockey player signed for the depth of the squad.

The first season went into adaptation.

He scored 21 points in the regular season (10 + 11), and was eliminated from the Avalanche in the second round in the playoffs.

But in the next Valery turned into one of the leaders of the team.

The trust from the head coach Jared Bednar helped in many ways, to whom the Russian should be grateful for a second chance.

He identified the ward in the first link to Landeskog and Nathan McKinnon, and he opened up.

In the regular season, he set a new personal achievement in the number of points in the "goal + pass" system (25 + 27).

But he really sparkled at the right time - in the playoffs.

Then he equalized the score in the first match with St. Louis, and in the other two games with the Blues he assisted partners three times.

Bednar never tired of admiring the power forward and noted his extraordinary importance for the team.

“He's just made for this time of year.

Val, as I have already noted, is a large, tall, strong, fast, stubborn, purposeful player, tirelessly rushing to the puck, who realizes his chances.

He knows how to interact with top hockey players, can play different roles in the team, has skills when playing in the majority and in the minority.

I don’t know what else to say about him, ”the official website of the league quotes the specialist as saying.

Then Nichushkin scored a double in Game 3 of the Western Conference Finals, where Colorado left no chance for Edmonton.

But Valery left the main accomplishments for the decisive series.

In the very first match with Tampa, the forward first distinguished himself, with incredible aggression and pressure, literally forcing opponents to make fatal mistakes.

And already in overtime he gave an assist to Alex Burakovsky.

From these episodes, one can appreciate how great the hockey player's contribution to the triumph of the team is.

Let him not show beautiful hockey in the style of Nikita Kucherov, but help his partners.

In many ways, it was the presence of a Russian on the ice that became a huge problem for the reigning champion.

Thanks to his activity and power, he managed to prevent his opponents from calmly launching attacks.

The colossal role of Valery was also noted by his teammates.

“Val plays a very big role in our team and in terms of offense and containment.

Helps in every aspect.

His role is huge, he continues to improve and is a big, important element of the team, ”admired Landeskog, his teammate.

In turn, Devon Toews did not hide his surprise that with such dimensions, Nichushkin skates superbly and feels the game subtly.

“Val is a highly motivated player who trains hard between matches.

In the playoffs, this big, physically strong hockey player gives all the best.

And for such a big guy to skate so well, it’s like a kind of lost art… You don’t see that often: for a player of his size to be able to move and protect the puck the way he can, get into good offensive zones and play so great for us ", - emphasized the defender.

However, it is important that the striker not only did the rough work, but also regularly hit other people's gates.

In the second meeting of the series, Colorado achieved a crushing victory with a score of 7: 0, and Nichushkin scored a double.

Finally, in the fifth, although the Avalanche were defeated, he scored again and tied the club's record for goals in the Stanley Cup Final.

In 2001, Joe Sakic and Alex Tangway scored four goals each.

After 21 years, the Russian repeated their achievement and helped the team win the trophy again.

“Some people take a certain amount of time to break through – it doesn’t happen that you only move higher and higher.

Take, for example, those who debut and the problems they may have in their second and third years.

But in the case of Val, we are talking about a large, strong, tough hockey player who also rides great, ”shared the reasons for the rise of ex-ward Lindy Ruff, who worked with the hockey player in Dallas.

In the final confrontation, the striker failed to upset Andrey Vasilevsky, but again showed unbending willpower.

Due to an injury, he missed the rehearsal and appeared at the stadium with a severe limp.

But the Chelyabinsk player not only got into the application, but also spent more than 20 minutes on the ice.

“It happens to everyone.

Chances are created, but the puck does not go.

The main thing is to be patient.

Valera is well done for not breaking down psychologically.

He returned and proved that he is a real player who has character, ”said the first coach of the hockey player Viktor Vetshev.

Nichushkin did everything so that his team won the Stanley Cup for the third time in history and actually thanked the club and Bednar personally for their trust.

Now the management will try to keep the hockey player who spent a great season.

There is no doubt that he will receive several lucrative offers, another thing is that he may not want to leave Denver.