Jeon In-ji won the KPMG Women's PGA Championship, a major event on the US LPGA Tour. In the fourth round on the final day of the tournament held at Congressional CC in Maryland, USA, Inji Jeon hit a 3-over par 75 with 2 birdies and 5 bogeys. 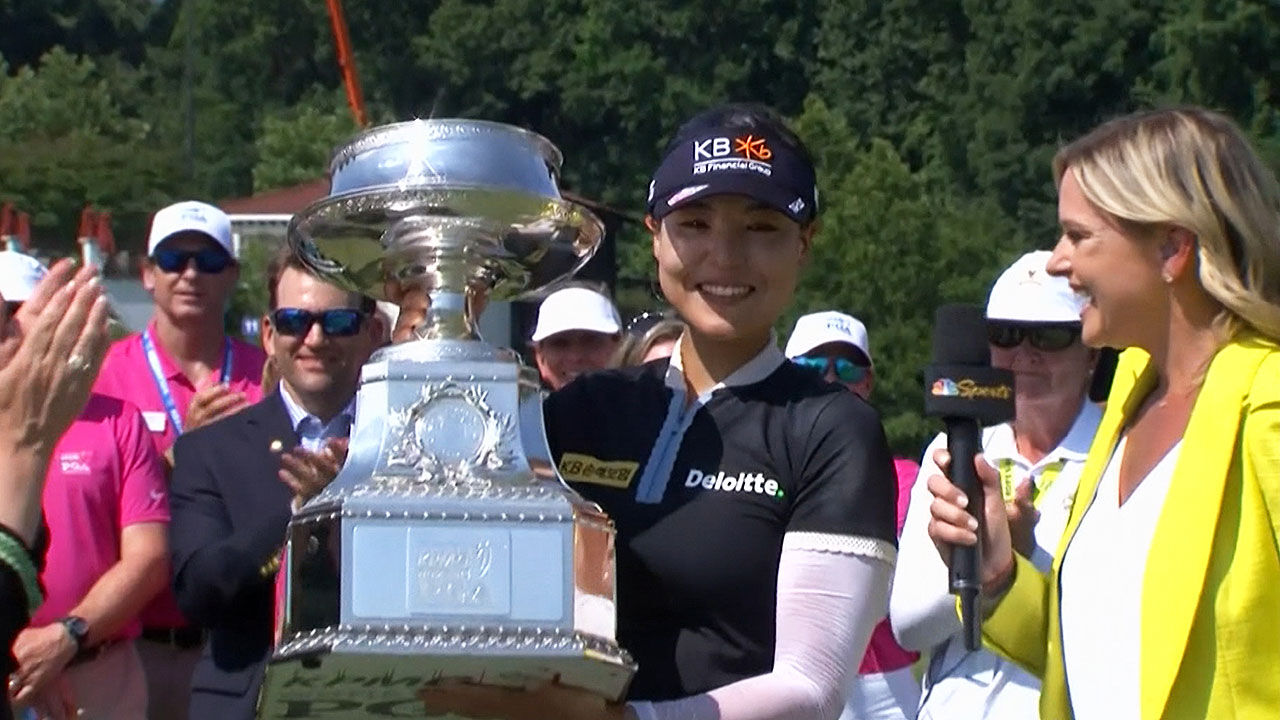 Jeon In-ji won the KPMG Women's PGA Championship, a major event on the US LPGA Tour.

In the fourth round on the final day of the tournament held at Congressional CC in Maryland, USA, Inji Jeon hit a 3-over par 75 with 2 birdies and 5 bogeys.

With a final total of 5 under-par 283, she finished tied for second place by one shot over Lexi Thompson of the United States and Korean immigrants from Australia.

In-ji Jeon, who recorded her 4th win on her LPGA Tour career after 3 years and 8 months since the KEB Hana Bank Championship in October 2018, received her winning prize of $1.35 million, or 1.75 billion won in our money.

In-Jeon Jeon reaffirmed her 'major queen' side by winning the US Women's Open in 2015, the Evian Championship in 2016, and only three of her four major wins on her LPGA tour up to this tournament.

On the first day of the contest, she drove an 8-under par, where she led the solo lead by five shots and then ran away by six in the second round, while Jeon In-ji played three rounds and allowed a three-shot chase.

In today's final round, she repeated the show under strong pressure, losing four shots in the first half, giving Lexi Thompson two shots to lead the lead, but a last-minute comeback to win the 'Wire to Wire'.

Jeon's win this time helped her jump to second place in her LPGA Tour season prize money ($181,531) and fourth place in points (72 points) for Player of the Year.

With Jeon In-ji's victory, the Korean player's 'consecutive draw' in the major championships of the LPGA Tour, which had been going on for a year and a half since A-rim Kim of the US Women's Open in December 2020, ended with 7 tournaments.

On the LPGA Tour this season, Korean players collaborated on a total of four victories: Jin-young Ko of the HSBC Women's World Championship in March, Hyo-joo Kim of the Lotte Championship in April, Eun-hee Ji of Bank of Hope Match Play last month, and In-ji Jeon of this tournament.

In-ji Jeon, who started the final round with a three-shot lead, struggled on a difficult course and struggled with bogeys on holes 2, 4, and 6, while Thompson took the lead alone by catching two birdies in the early days.

On the ninth hole (par 5), Jeon In-ji, who hit a bogey with a shaky shot, was overtaken by Thompson by two shots at the end of the first half.

In-Jeon Jeon dropped a tricky mid-range putt on the 11th hole (par 5) and caught the first birdie, and Thompson responded with a birdie on this hole, followed by a two-stroke difference.

On the 12th hole (par 4), the gap did not close as both players bogeyed.

Thompson missed a short par putt on the 14th hole (par 4) and was chased by one stroke before, but the ball hit by the putter on the 15th hole (par 4) fringe was sucked into the hole and rebounded as a birdie, leading by two strokes. has been maintained.

Up until this point, Thompson's victory seemed likely, but things have changed drastically since then.

Thompson's third shot from the rough around the 16th (par 5) green was too strong to land on the other side of the green, and then the putter hit the ball far past the hole for a bogey.

On the other hand, Jeon In-ji did not miss the opportunity made with an accurate wedge shot, and succeeded in birdieing, making a tie at 5-under in an instant.

Then, on the 17th hole (par 4), Thompson missed another short par putt, and Jeon Inji, who kept the par here, took the lead by one stroke alone.

On the 18th hole (par 4), Thompson missed a birdie putt, and In-Jeon Jeon calmly kept the par to secure the win and shed tears of emotion.

Jeon In-ji cried at the awards ceremony as well, saying, "I haven't won the championship in over three and a half years, so this win means a lot.

In the official interview, he continued his impressions in English and Korean.

Jeon In-ji said, "Hyejin Choi and Lexi Thompson hit so well in the first nine holes, I honestly felt a lot of pressure, so I couldn't enjoy golf." He expressed his overwhelming feelings.

Looking back on her last winning putt, Jeon In-ji said, "When I left the par on the 18th hole, I promised myself, 'Inji, you put a lot of long putts. You can handle the pressure. You can put this putt.' In the end, I succeeded in winning the putt.”

Lexi Thompson, who was aiming to win the championship for the first time in three years since the Shopright Classic in June 2019, made mistakes one after another and had to be content with runner-up.

Lee Min-ji, who won the U.S. Women's Open earlier this month, reduced two strokes today and finished the contest in a tie for second place.

Thailand's Ataya Titikun finished solo 4th with 3-under, and Hyejin Choi, Se-young Kim, and Hyo-joo Kim tied for 5th with 1-under par.