Dissatisfaction with the transfer policy and Chelsea's interest in Bayern: what is known about the possible departure of Ronaldo from Manchester United

Cristiano Ronaldo may be leaving Manchester United soon. According to media reports, the Portuguese is dissatisfied with the inaction of the club in the transfer market and fears that he will spend the last years of his career as a player in a team that does not claim high places. Among the possible contenders for the footballer are Bayern, Chelsea and Roma. However, according to insiders, the Mancunians are not considering selling the 37-year-old striker, and head coach Erik ten Hag expects to keep him in the squad. 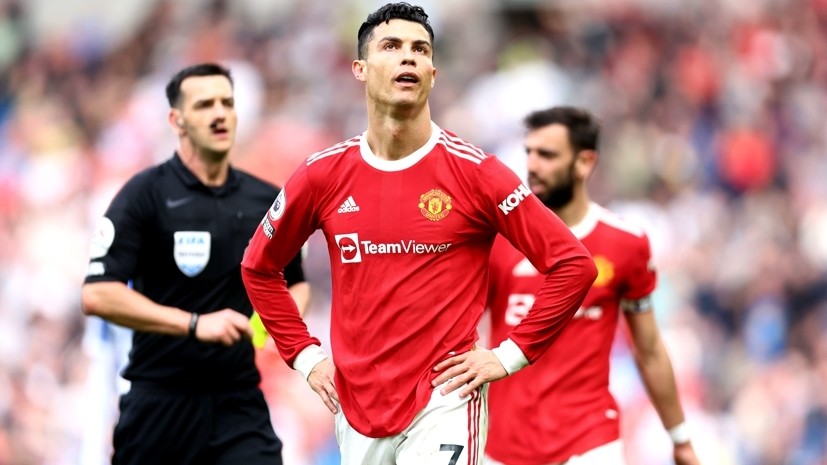 In terms of transfer intrigues, this summer can safely be called one of the busiest in recent years.

The sagas involving Kylian Mbappe and Sadio Mane have recently ended, and soon the story of the possible departure of Robert Lewandowski from Bayern may be put to an end.

And if the Pole nevertheless replenishes the composition of Barcelona, ​​he may well be replaced by none other than Cristiano Ronaldo.

Judging by the rumors, the Portuguese is extremely dissatisfied with the state of affairs at Manchester United and is seriously thinking about leaving his almost native club.

Rumors about the departure of Ronaldo from Manchester appeared immediately after the announcement of the appointment of Erik ten Hag as head coach of the Red Devils.

True, then the Dutch mentor himself was called the initiator of this.

It was noted that the striker does not fit into the new model of the game, as a result of which the only reasonable solution would be to sell an expensive player.

However, later this information was refuted.

During the negotiations, the parties managed to find a common language and understand how to move forward together.

But suddenly another problem arose that made Cristiano himself doubt the advisability of staying at Manchester United.

First, the Spanish publication AS reported Ronaldo's dissatisfaction with the club's transfer policy, and then the Portuguese Record confirmed this information.

It was noted that the player was angry with the lack of activity in the market and expressed the opinion that without serious acquisitions, Manchester United would not be able to compete on equal terms with other Premier League giants who spend substantial funds on the purchase of performers of the caliber of Erling Haaland and Darwin Nunez.

At the same time, in the striker’s homeland, his condition was completely described as close to a nervous breakdown, and they also announced his readiness to leave the team if the management did not take up strengthening the squad.

And Ronaldo's fears are partially understandable.

Last season, the Mancunians took only sixth place in the Premier League, leaving behind not only the big three in the face of Manchester City, Liverpool and Chelsea, but also Tottenham and Arsenal.

As a result, "United" did not get into the Champions League and will be forced to be content with the performance in the second most powerful European Cup.

This is already enough to think about strengthening the squad, and the invitation of a new coach is even more conducive to such steps.

Ten Hag will certainly try to instill his style of play in the team, and for this he may need certain performers.

But for now, Manchester is only parting with the players, and potential newcomers are unlikely to delight the fans.

Paul Pogba, Edinson Cavani, Jesse Lingard, Juan Mata and Nemanja Matic have already left Old Trafford as free agents, the latter of whom has already signed an agreement with Roma.

And no one has yet been bought to replace it.

Yes, there are rumors of talks with Frankie de Jong, Anthony, Jurrien Timber and Lisandro Martinez.

But all of this is more like ten Hag wanting to surround himself with former Ajax pupils already adapted to his game model.

At the same time, the first does not want to leave Barcelona, ​​while the rest achieved success only at the level of the Dutch Eredivisie.

And it’s far from certain that they will be able to perform just as brightly in the Premier League, a much stronger and more competitive league.

There is also talk of interest in Christian Eriksen, but in his current state, he is unlikely to match Manchester United's lofty ambitions.

And these possible transfers look especially unimpressive against the backdrop of the purchases of the same Haaland and Nunez.

Therefore, it is not surprising that Ronaldo is very nervous about the current situation and is afraid to spend one of the last seasons of his career at a club that does not claim high places.

Against this background, information began to appear in the press about the departure of Ronaldo from Manchester United.

First it became known about the interest in him from Roma, led by his former coach and compatriot José Mourinho.

However, it is unlikely that moving to the Eternal City will interest Cristiano himself.

The Romans have modest financial resources and solve even smaller tasks, and are unlikely to be able to pull his contract.

According to the portal Salarysport, the Portuguese receives £24.96 million a year (€29 million) - about the same as earning the four highest paid Wolves players.

Among other things, Roma did not make it to the Champions League, and for Ronaldo this is almost a key factor in choosing a future place of work.

According to Portuguese journalist Pedro Sepulveda, the striker is obsessed with this tournament and therefore would like to be in a team that sets itself the task of winning the main European Cup.

And barring potential returns to Real Madrid or Juventus, and unlikely moves to Liverpool, City, Barcelona and Paris Saint-Germain, there are only a handful of clubs that fit his bill.

One of them is Bayern, which is about to be left without a central striker.

Negotiations with Barcelona on the transfer of Lewandowski are difficult, but there are chances of reaching an agreement.

While Munich does not agree to the proposed conditions and is trying to extract as much money from the Catalans as possible, they may well make concessions and sell the striker for less than the previously announced €60 million. player with an expiring contract.

In 2023, Robert will be able to leave Germany as a free agent, and it is much more logical to get at least some funds for him.

According to AS, Bayern will consider the purchase of Ronaldo in the event of parting with Lewandowski, although the same Sepulveda expressed a different opinion.

According to him, it was the striker's agent Jorge Mendes who initiated the negotiations, and the team was embarrassed by his appeal.

Subsequently, the sports director of the Germans, Hasan Salihamidzic, commented on the rumors.

He called Cristiano a top player with an outstanding career, but denied reports of a possible transfer.

According to Sport1, Bayern really considered the idea of ​​​​inviting Ronaldo, but abandoned this venture.

The reason was the unwillingness to have a player in the squad who receives much more than others, and also puts his own interests above the team's.

Against this background, information about the desire of the new owner of Chelsea, Todd Boeli, to acquire Ronaldo looks even less plausible.

Firstly, the 37-year-old striker himself is unlikely to want to spoil his reputation at the end of his career and become an object of hatred for Manchester United fans.

Secondly, the Red Devils are unlikely to give up their top scorer to their competitors.

Despite the abundance of criticism, Cristiano scored 24 goals in all competitions and was recognized as the best player in United last season.

According to the media, Manchester United also understand the value of Ronaldo for the team and do not intend to part with him this summer.

First, the well-known insider Fabrizio Romano wrote about this, emphasizing that the club's bosses were not going to sell Cristiano, and then ESPN published similar information.

It is noted that the leaders have already told the football player about their unwillingness to let him go, ten Hag also wants to keep him.

But in this case, Manchester United may have no choice but to comply with Ronaldo's demands and rebuild the squad.

If he is really dissatisfied with the performance of the club in the market, then the lack of quality improvement can provoke dissatisfaction on his part.

And in this case, the work of ten Hag will be noticeably more complicated.

Cristiano has great authority, and his mood may well be transmitted to partners.

In turn, the departure of the Portuguese may well benefit both sides.

Ronaldo will get a chance to spend the last years of his playing career in a Champions League contender team, and Manchester United will roll back to last year's values ​​​​and get the opportunity for a full-scale restructuring.

Indeed, in many ways, it was the arrival of Cristiano that introduced an imbalance and provoked the resignation of Ole Gunnar Solskjaer.

The Norwegian was never able to integrate it into the system and was forced to leave.

In this case, ten Hag can calmly focus on creating a new team and not worry about the immediate result and satisfying the demands of the obstinate star.